Ahead of their gig at the Sama Festival in London this weekend, we’ve been reflecting on the support we’ve received from the talented Zimbabwean musical duo Selmor and Tendai to date.

The pair were huge champions of our Strong Girl and Poverty is Sexist campaigns – Selmor performed on the Strong Girl song – and Tendai has been an outspoken supporter of worldwide gender equality.

Last year, ONE got to chat to the pair following a visit to our US office. This is what they had to say.

This interview was conducted in November 2015.

You two are a musical power couple. You both have famous musician fathers. Here, if two children of two different famous people got together, they would be on every magazine and cameras would follow them everywhere. Is it like that at all in Zimbabwe?

Selmor: We don’t have paparazzi, but it is quite a big deal. When we first got together, it was a huge deal. All the newspapers and the magazines—it’s a big deal that we’re together and they’re surprised that we’re still together.

Does that help when you’re talking about the issues that are so important to you?

Selmor: It really does, because people don’t just listen to anybody. You know, you must have done something that they like for them to actually give you their attention. So it’s been good that we do this; it’s been amazing. 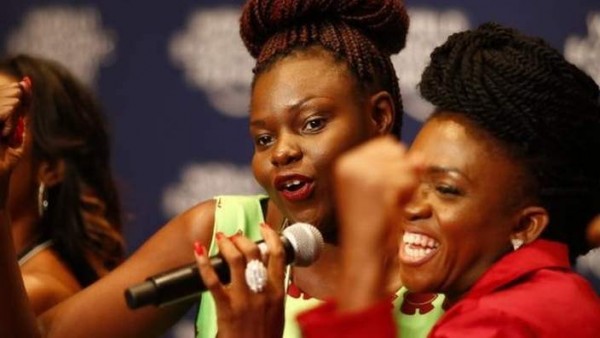 What was it like growing up as the children of famous musicians in Zimbabwe?

Selmor: It was terrible! It was terrible. As a kid, all you want is to just be a kid, to be normal. The worst part was going to school the next day after one of my dad’s music videos was played on TV the previous night—the following day, kids would be singing that song to your face and stuff. It was the worst experience. I wished I had just a normal father.
Tendai: When you’re a kid, you don’t understand what they mean because he’s just your father. When you get home, he is just your dad. He is not the famous guy.

Are you worried about that at all for your kids?

Selmor: A little bit, a little bit. I am conscious of the fact of all the experiences I’ve gone through, so I’m going to try as much as I can to help out in any way. But since I have experience with it, I’m sure I can help them out somehow and maybe not embarrass them at school, and try to be cool or whatever.
Tendai: I don’t think they realise who we are yet. They don’t know.
Selmor: Our oldest is 7 and he knows we sing and he knows we come out on TV, but that’s as far as it goes.

Did the two of you make a choice to explore social issues through your music, or is that something that is relatively common with artists in Zimbabwe?

Tendai: The kind of social issues that Selmor explores, it’s not really common with Zim artists. Also, there’s not too many female artists in Zimbabwe. It’s a male-dominated industry.
Selmor: Being able then to speak up about these issues in my music has been very important to me because there are not too many women in the industry, so our issues are not addressed as much as they should be, so it’s quite a privilege and an honor for me to do that through my music. It was a somewhat conscious decision to sing about the issues that we face, and that’s what I know. And I sing about what I know and what I experience.

What are some specific moments that you can think of that were difficult for you as a woman in the music industry?

Selmor: It’s difficult. Getting to the level where I’m at now, it takes a lot of work and perseverance. You’ve got to be strong to be able to get your work out there and get recognised, because they still think that the male artists are better than the women. They still do that. They still have that mentality. And I have a famous father in the same industry as me, so coming out trying to do the same things, people would be like, “You can never be as good as your father” and that kind of thing. So it’s been very challenging. But I’m glad that I’m here and I’m doing this. And ONE has approached me, so it means something.

That’s right! Is that why you were excited to participate in the “Strong Girl” song?

Selmor: Yes, I wouldn’t have missed it. Besides the fact that I do believe in the message that we’re trying to put across with the campaign. I believe in it so much and I think I was the best person they could have picked to do this, because I am really passionate about it! I was so excited to be part of this huge campaign, and internationally, it doesn’t get better than this.

Tell me about your experiences during the production of “Strong Girl.” What was the process like? Were you all writing and recording together?

Selmor: When we all got together, we got to listen to the song and each artist wrote their own lyrics and what they wanted to say in the song based on the message they were trying to put across. It was quite fun hearing all the other girls and whatever they came up with. Putting all our different backgrounds into the song was amazing. 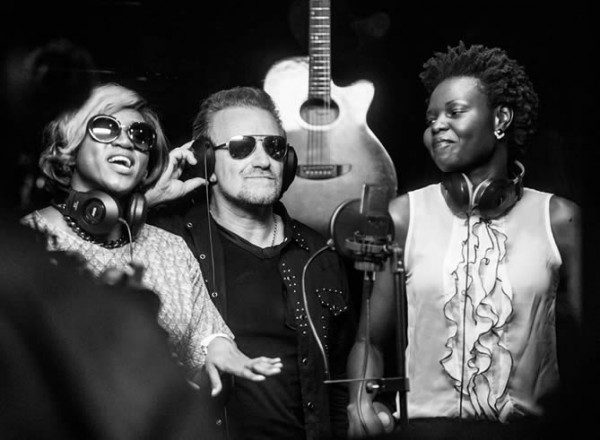 Let’s talk about your music—do you like singing in English or in Shona better?

Selmor: I sing in Shona more than I do in English. I’ve just recently started singing a little bit more in English. But I’m more comfortable in my own language. It’s who I am and I express myself better that way. But I’ve been exposed to a lot of things now with all of this that I’m doing and the last album that I did; I’d begun to travel a lot. And so I’ve had some influences into my music and now I’m able to even sing in English. My biggest hit, the one I won an award for? It’s got more English than Shona. So I guess it’s becoming and evolving into something else as time goes on.

Tell me about that award?

Selmor: Yes, the African Entertainment Awards! They were in New York and I was super excited and I was nominated in the same category as Yemi Alade, Zahara from South Africa, Tinashe—she’s a Zimbabwean—and I won! So I’m so, so excited! Even the people who were doing the awards were surprised, they were like, “We’re so shocked that you won!” I was like, “What?!” But I understand.
Tendai: When they called out her name, she froze!
Selmor: Yes! I was like, “You don’t mean me!” But I was so, so happy and so, so excited.

Selmor: Well, we know each other. And we have a bond and chemistry going. So I’m more comfortable knowing that he’s taking care of what he’s supposed to be taking care of. And I’m sure he’s confident in me being able to deliver whatever I need to be doing.
Tendai: We started working together before we got married. It’s how we met. Since then, working together has never been a problem. 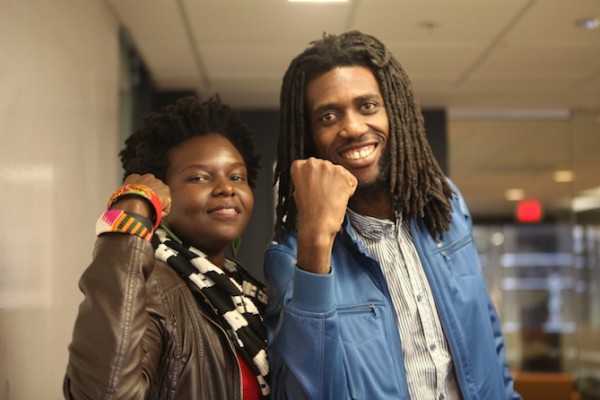 Selmor and Tendai pose for a #strengthie during their visit to the U.S.

What’s next for you—with your campaigning, music, or both?

Selmor: I’m working with an organisation called Kenako; I’m their ambassador. We basically are helping out girls in our country dealing with such issues like getting them sanitary ware. Kids in the rural areas have no access to sanitary ware. They can’t afford it, basically, so they end up missing school for that whole week because you can’t be going to school during that time of the month. So we do that: We acquire funds from different organisations and we get them sanitary products and we take it to the schools and show them how to use them.

Also, another organisation called Keepers—I sit on the board for that. We are taking children off the streets, training them, and trying to get them employment. We’re training them in broadcasting and journalism for them to be able to write stuff. So that’s what we’re doing.

But in 2016, we’ll be recording my fifth album. We recently released the single for that album—it’s number one on regional television!

To change course a bit, what are your hopes for Zimbabwe in the next year and the next ten years?

Tendai: In the next year, this energy poverty issue, we just really pray and hope that this works out in Zimbabwe. It can’t wait for us because we are experiencing the worst time right now. We have no power at all. We only get power when we’re sleeping; by 5 a.m., when you wake up, it’s gone. So we get power for six hours, and the rest of the 18 hours, there’s no power. So I really hope it works out. (Editor’s note: Since this interview, the US has passed the Electrify Africa Act.)
Selmor: In the next ten years, I’m hoping to see that there’ll be a time when women are able to get into businesses—different kinds of businesses—and not have this whole shadow thing upon them, that you’re a woman and you can’t do this. I’m hoping in ten years, we must have reached some kind of different mindset to realise that we are equally as good as any other person and be able to do what we love to do and not be judged based on gender. That’s what I would like to see.
Tendai: The good thing is that it’s starting right now.
Selmor: Yeah, we’re getting a lot of guys on board, who are supporting us and it’s amazing.

Yes, what do you feel is the role of men in the gender equality issue there?

Tendai: It’s one thing for women to say that they want to be equal to men, but the men don’t really take women seriously—they’re the same people that are abusing them. But if we come behind the women, if I support my wife, it means that we are taking them seriously and we can see a change. I think if we support them, then we can see change quicker because the men will listen to other men.

What’s one thing that you wish people knew about Zimbabwe?

Tendai: That we are nice people! We are not violent at all. If you came to Zimbabwe, you won’t bump into violence. We don’t go out on strike and say, “We want this!” Rarely do we strike.
Selmor: Zimbabweans, they’re the most hard-working people, both women and men. There’s no lazy person in Zimbabwe. People should realise that, because with our economy and the way it’s been for the past I don’t know how many years now, we are still surviving! We’re still there and we’re still hanging on! We still find somehow, some way to feed our children and still have hope for the future. I want people to know that in Zimbabwe, we are hard workers and we are not lazy. If we’re given a job to do, we get it done. And we’re a loving people. And Zimbabwe as a country is beautiful. People should visit!

If like Selmor and Tendai, you support worldwide gender equality – sign our Poverty is Sexist petition today!