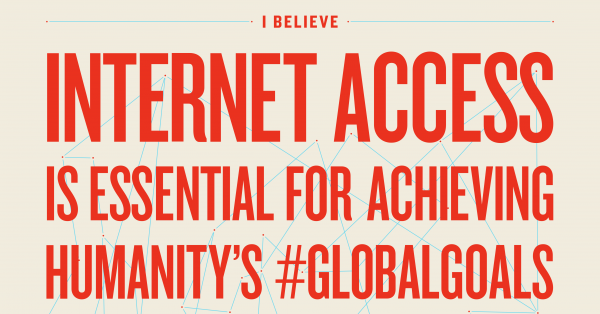 Prominent leaders from the global development community, technology industry, the arts and entertainment joined today in an unprecedented call for world leaders to implement the promise within the newly agreed Global Goals that universal internet access become a reality by 2020!

This week, world leaders are gathered at the United Nations to approve the Global Goals, a new global development blueprint aimed at solving the most pressing social and economic challenges of our time.

Recognising the indispensable role the internet plays in creating jobs and opportunities, enabling access to essential public services, advancing human rights and justice, and ensuring government transparency and accountability, the Declaration calls on governments around the world to work together with innovators to finally deliver access to every person, every where.

“Internet access is a catalyst for creating a world of greater freedom, fairness and dignity for all peoples, everywhere,” said Jamie Drummond, co-founder and global executive director of ONE. “Every country must now agree an urgent plan to implement the Global Goals, and mission-critical within those strategies is connectivity for all. The Pope and Malala have spoken eloquently about the one world and one family we’re all a part of, and the internet, at its best, facilitates that unity. But when three billion are left beyond the internet, they are left behind and left out of that family. That must change and fast.”

I believe:
Internet access is essential for achieving humanity’s #globalgoals

The internet is critical to fighting injustice, sharing new ideas and helping entrepreneurs create more jobs. But right now half the people on this planet don’t have access, especially women and girls.

The internet belongs to everyone. It should be accessible by everyone.

I call on leaders and innovators from all countries, industries and communities to work together as one to make universal internet access a reality by 2020, as promised in the new Global Goals.

Lets #CONNECTTHEWORLD to achieve our #GLOBALGOALS

Citizens are invited to join the movement by signing on to the Declaration at one.org/connecttheworld.

“The Global Goals represent a great promise, but it’s a promise which will be delivered far more quickly if citizens can use connectivity to share information about jobs education healthcare banking, and hold leaders accountable,” said Mo Ibrahim of the Mo Ibrahim Foundation. “Every country should urgently put together a plan to realise the goals, and within those plans a critical component is connectivity.”

“The internet has revolutionised the way that citizens organise and mobilise,” Danny Sriskandarajah from Civicus said. “Bridging the digital divide will allow us to promote active democracy and institutional accountability in more places around the world.”

The leaders of 193 nations formally adopted the Global Goals for Sustainable Development at the United Nations on Friday after years of negotiation. The Goals aim to fight inequality, protect our planet, and end extreme poverty by 2030. The Connectivity Declaration draws attention to target 9.c of the Global Goals demanding internet access for all in the Least-Developed Countries by 2020.

The Global Goals build on the success of the Millennium Development Goals, which helped cut malaria deaths in half, reduced new HIV infections by 40 percent, saved millions of children’s lives, and contributed to a worldwide decline in extreme poverty of more than 50 percent.

Learn more about the Global Goals at one.org/globalgoals and follow on #GlobalGoals.