More than two thirds of Kenya’s population relies on the food they grow and the animals they keep to survive. But increasing drought means that many people are struggling to grow enough food on their own land, especially in the 83% of Kenya that is classified as arid or semi-arid.

The EU-funded “Farm Africa Dryland Farming Project” aimed to rapidly improve household food security for farming families in Kenya. Between January 2010 and October 2011, the organisation Farm Africa worked with smallholder farmers in the Kitui and Mwingi districts of Eastern Kenya to train them on improved techniques for raising dairy goats, water conservation methods as well as better ways of growing food in dry conditions. 90% financed by the European Union, the project directly benefits 7,000 small-scale farmers. 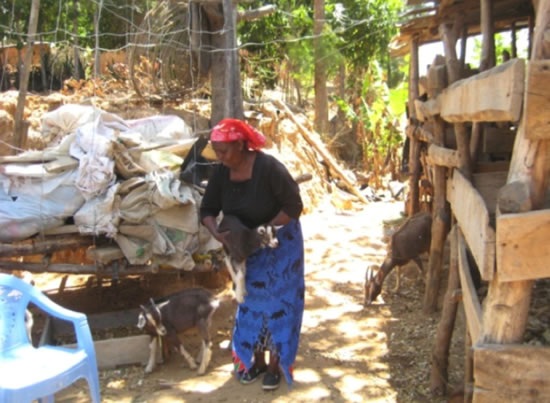 Ms Mwende Tuvi is one of the beneficiaries of the programme. Previously she also benefited from the EU-funded Farm-Africa’s Dairy Goat project (2005- 2010).

“The project introduced me to crops that tolerate drought and the tools I needed to farm” she explains. “I am so happy that ever since I was introduced to these crops, and with the manure I get from the animals, I have harvested enough food for our use, which had never happened before. I have been able to take my second son through school. You know anything goes here”, she jokes. “For example, sometimes I sell off manure to pay for my son’s school requirements. He is doing a course in journalism. Who would have imagined that prior to the project? Maybe my son will write about this great transformation when he graduates”. She told us her elder son no longer needs to send money home, because they now have enough to live on.

When we visited Ms Mwende Tuvi, her compound was a hive of activity – her husband was busy preparing fodder for the animals, construction workers were at work completing the house she is constructing and Ms Mwende was busy attending to the goats. Before the project, she struggled to feed her children and put them through school. She lived in mud-walled house, similar to the one she now uses for keeping her goats.

As we arrived, the phone rang with an order for one of her goats.  A deal was quickly done, with a price of KSh15,000 (around 140 EUR). She proceeded to tell us how brisk business is.  She can now sell a mature breeding goat for KSh26000 (around 240 EUR), and with the goats she has, she gets enough milk for her household needs and to sell to cover her other expenses such as casual labour for her animals and garden. 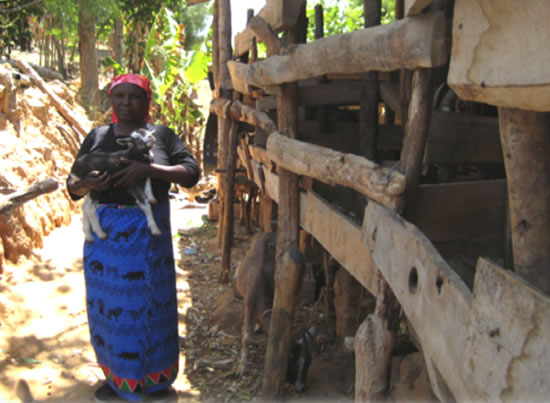 Flexibility from the EU allowed left-over funds from the project to be used to form a Savings and Credit Co-operative (SACCO) in the area. This has contributed to ensuring the good work started by the project is able to continue. Ms Mwende has also made use of the co-operative.  “I borrowed from our SACCO and started a small business, which because of the on-going construction work (of a house complete with rain-water harvesting facilities), I now operate from home”, she explained.

Thanks to EU funding, the Dryland Farming Project has shown that conserving both soil and water, and using drought tolerant crops can help farmers work themselves out of poverty.

Farm Africa is a specialist, non-governmental organisation that works with marginalised farmers and herders in Africa. It aims to reduce poverty through developing innovative approaches to natural resource management, helping African farmers find their own pathways out of poverty. Visit: http://www.farmafrica.org.uk