This story was originally reported by Inna Lazareva, Shanshan Chen and edited by Megan Rowling, Katy Migiro and Belinda Goldsmith for the Thomson Reuters Foundation.

A group of artists and musicians in South Sudan is on a mission – to mobilise young people across the country through music, graffiti and poetry to help bring peace to the war-torn nation.

In 2011, the streets of the capital Juba were full of revellers, celebrating the world’s newest nation.

But hope for the future has soured after more than four years of civil war, with about a third of the country’s 12 million people forced from their homes by conflict.

Arts movement AnaTaban, or “I am tired” in Arabic, is trying to address anger over failed promises and suppression of independent voices by advocating for peace and unity among young people through media they like – rap music, slam poetry, and YouTube videos. 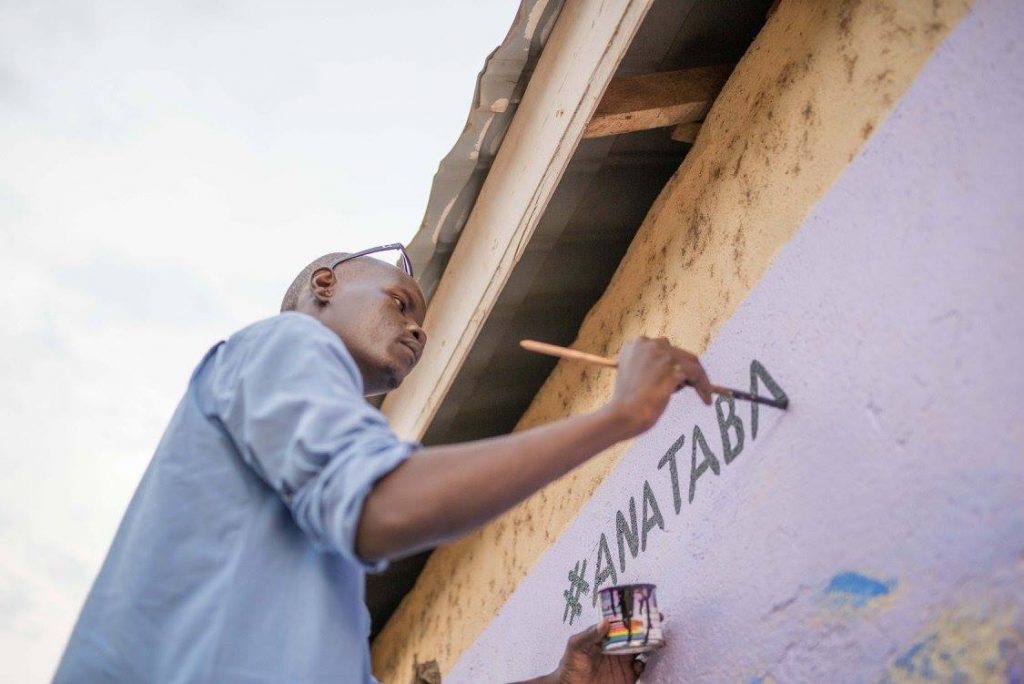 “As South Sudanese we are branded to be violent people but we are being unconventional in a very intentional way,” said poet Ayak Chol Deng Alak, 32, who helped set up AnaTaban in Juba in 2016. The group is now aiming to spread nationwide.

“We have seen conventional activism failing. If it is for our country, we might as well get the information out. It doesn’t really matter how, as long as we are not hurting anyone in the process,” she told the Thomson Reuters Foundation. 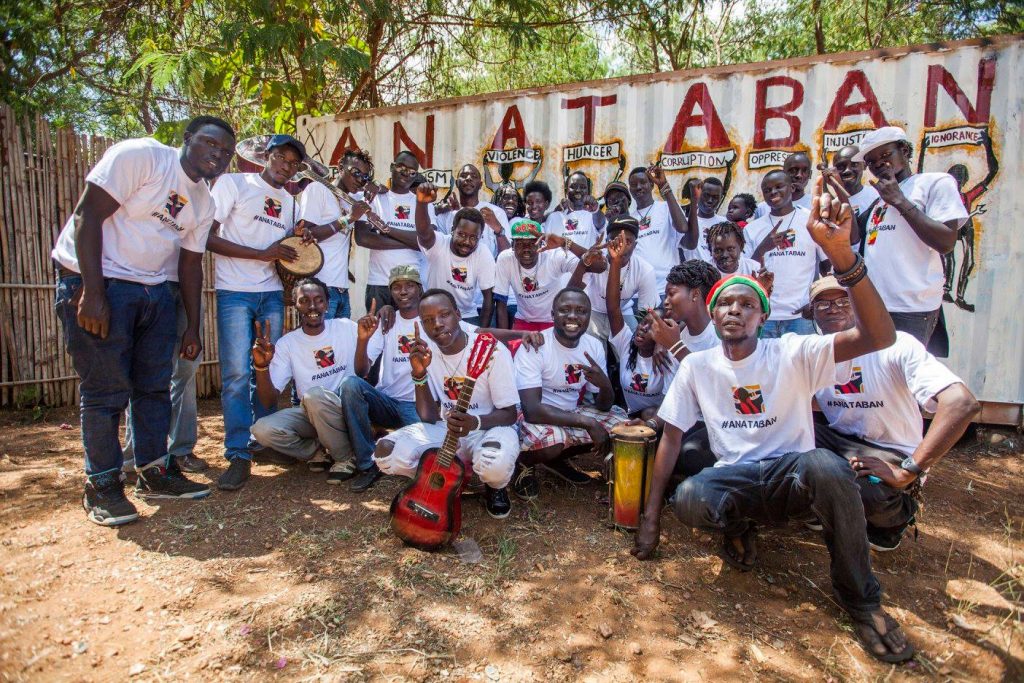 Born in an Ethiopian refugee camp where treatment from an aid agency saved her life, Alak is now a doctor and published poet in South Sudan, but her campaigning has come with risks.

Alak and other AnaTaban members say they have been interrogated, their cars confiscated, and some live apart from their families who have moved abroad for safety.

While being interviewed by two Thomson Reuters Foundation journalists at her apartment in Juba, Alak was taken outside for questioning by a man who wanted to know who her guests were. 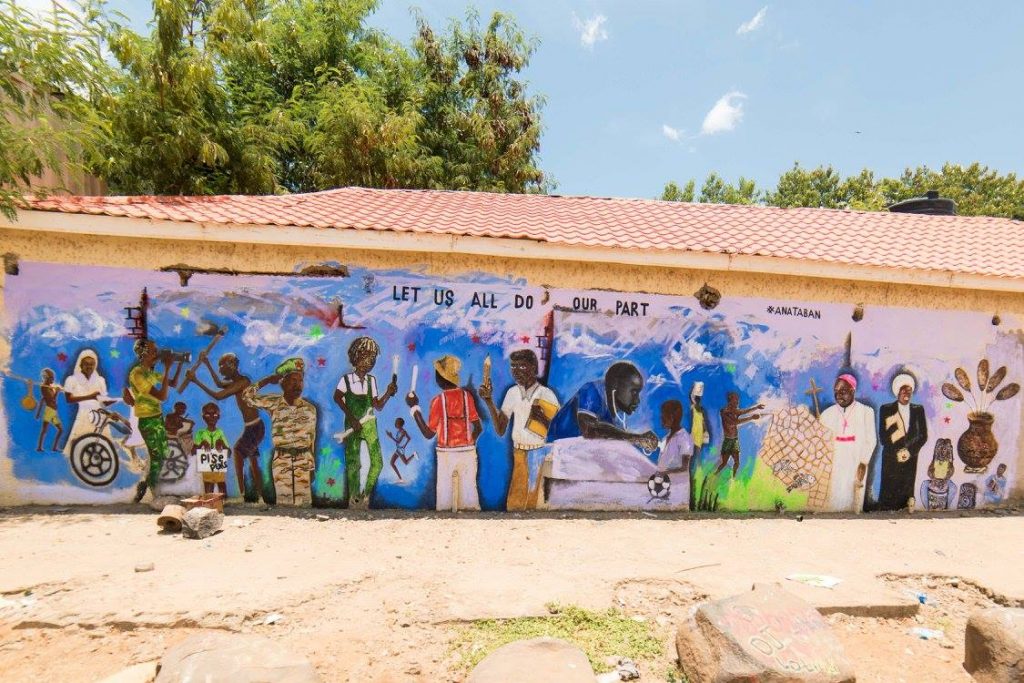 South Sudan’s government did not respond to requests for comment on its treatment of AnaTaban members. Previously the government has denied blocking anyone’s freedom of speech.

South Sudan plunged into conflict in 2013 after clashes between troops loyal to President Salva Kiir and his former deputy Riek Machar deteriorated into a military confrontation. Tens of thousands have died in fighting between the two sides. 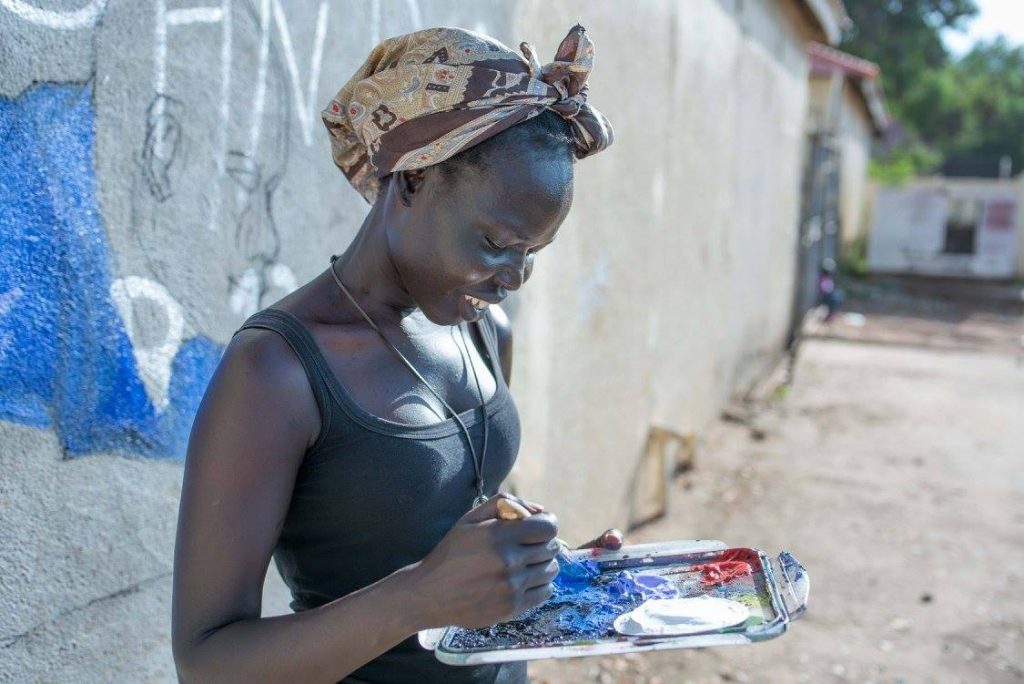 The U.N. Mission in South Sudan (UNMISS) has reported that more than 100 activists and journalists have been killed, arrested, detained, fired or censored since mid-2016, with newspapers closed, often by the government.

UNMISS was only able to verify violations in government-controlled areas because insecurity and movement restrictions hindered work in opposition-held territory.

Talks in Ethiopia last month to revive a failed 2015 peace pact and end the war broke up without a deal. 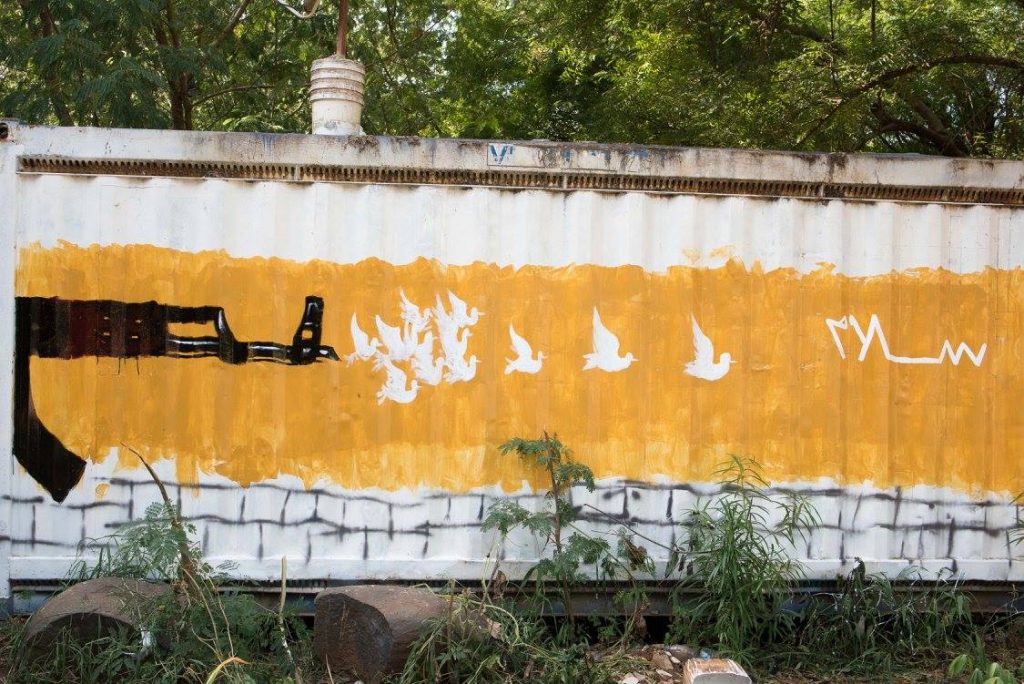 Manasseh Mathiang, a musician and another founding member of AnaTaban, said it was crucial to engage young people in the drive to forge a better country for the future.

Almost 90 percent of South Sudanese are under the age of 45, according to a 2008 census. But illiteracy tops 70 percent, U.N. figures show, and unemployment is rife.

“The youth of South Sudan for so long have not had the opportunity or the platform to speak and to express themselves,” Mathiang told the Thomson Reuters Foundation in the group’s headquarters in Juba. 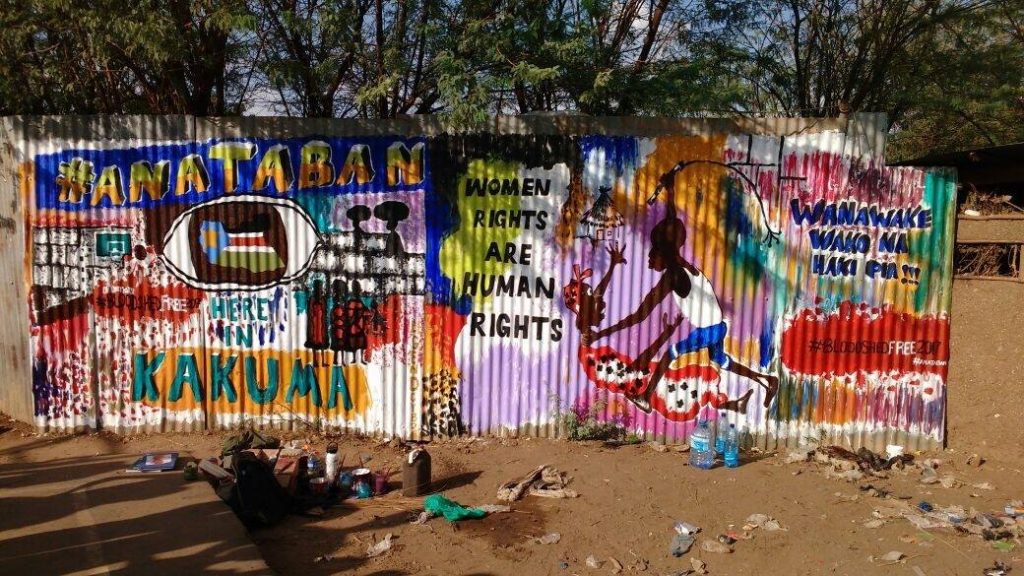 Peter Biar, chairman of the South Sudan Young Leaders Forum, based in Juba, said AnaTaban was one of a growing number of youth groups – both in rebel and government-controlled territory – striving for a better tomorrow.

“The only change that is possible in this country is a non-violent change – and this is what we are going to attempt,” said Biar, who works to bring together academics, church and youth leaders to advocate for peace and development.

Biar said AnaTaban has given hope to disillusioned young people in the capital through art and music. 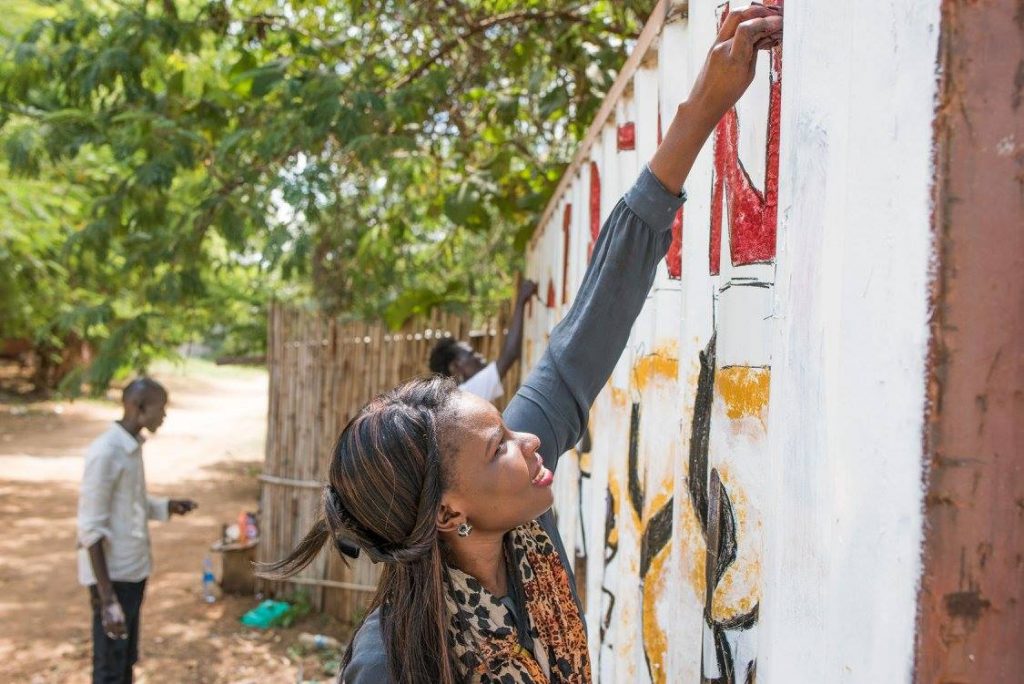 AnaTaban’s first music video, posted on YouTube in August 2016, featuring artists, slam poets and activists, is dedicated “to all those we have lost in this senseless war and to all those who are still here and are tired enough to make the changes we need”.

The group’s social media campaigns are quickly shared, and it has branches in neighbouring Kenya, Uganda and Ethiopia.

Striking AnaTaban murals adorn the grey walls of streets and buildings in central Juba, quoting Nelson Mandela, Fidel Castro and the late John Garang, revered as the father of the nation. 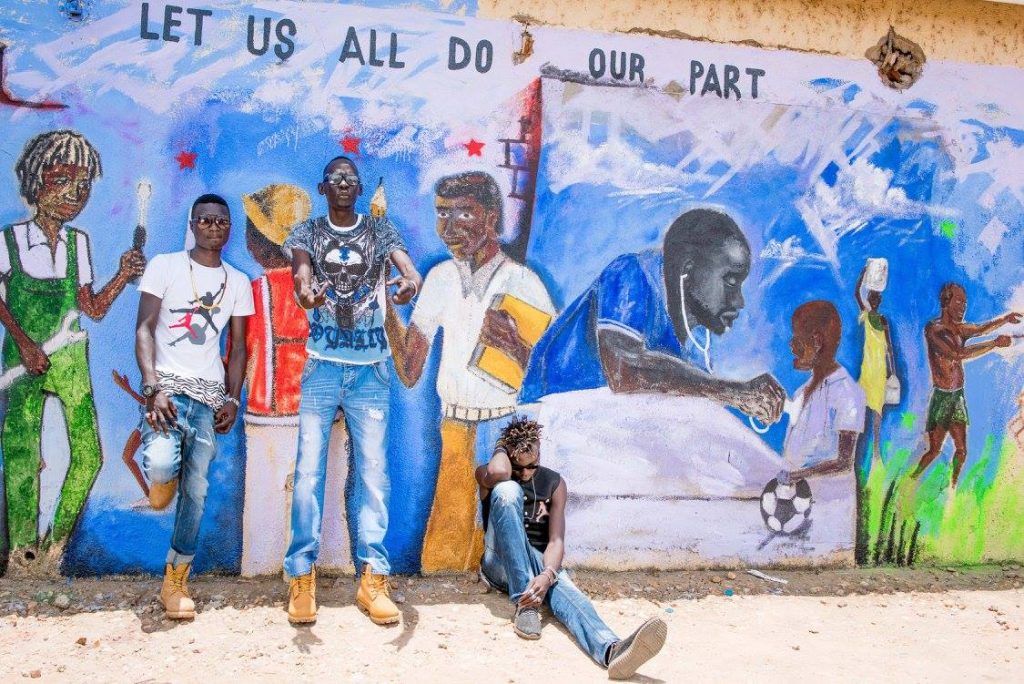 The former child soldier said he fled to Kenya after colleagues were abducted, poisoned and killed. He received a death threat – a dog’s jawbone with a bullet lodged inside.

“We thought we had a country … This not what we fought for,” he told the Thomson Reuters Foundation. 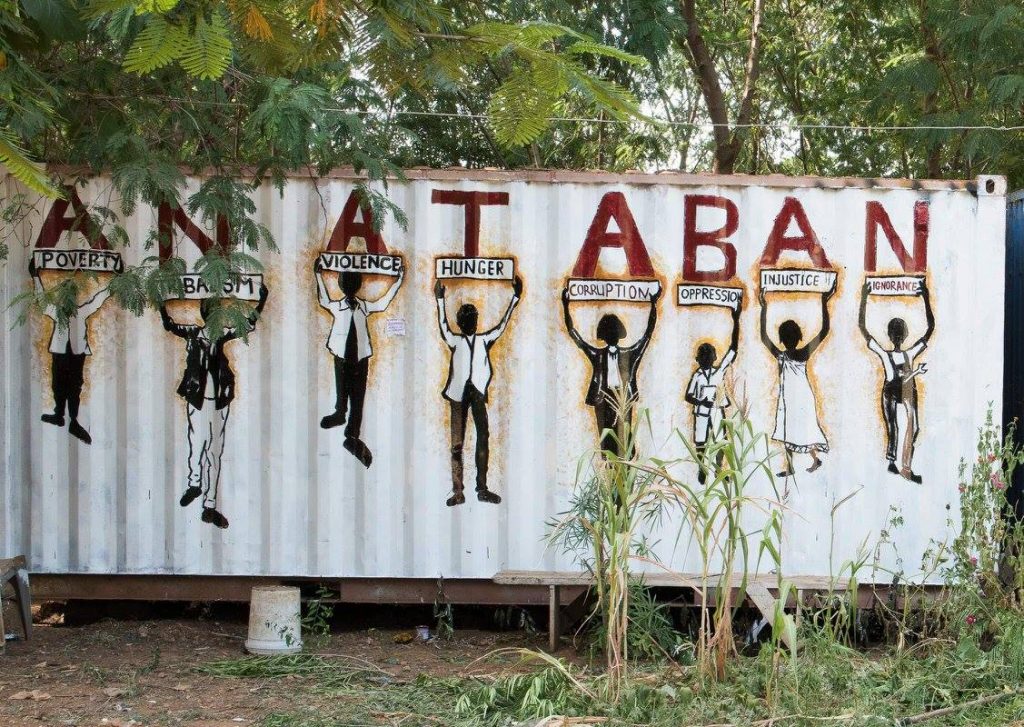 The exiles hope a peace agreement will be reached so that they can “go back and claim our rights as South Sudanese”, said Jackline Sadrack of AnaTaban’s Uganda chapter.

Despite the failure to reach a peace deal so far, South Sudan’s youth remain hopeful.

“I have this opportunity through my music to play a role in speaking on behalf of my people and what we desire as a people. Most of my songs are about how I would want peace in my country,” said Mathiang.