This guest post is by journalist Abby Higgins, in partnership with The Seattle Globalist. It’s the first in a three part series which reveals the economically complex and culturally rich life of urban slums, and challenges our perceptions of what life is like for the 1 billion people around the world that live in them. 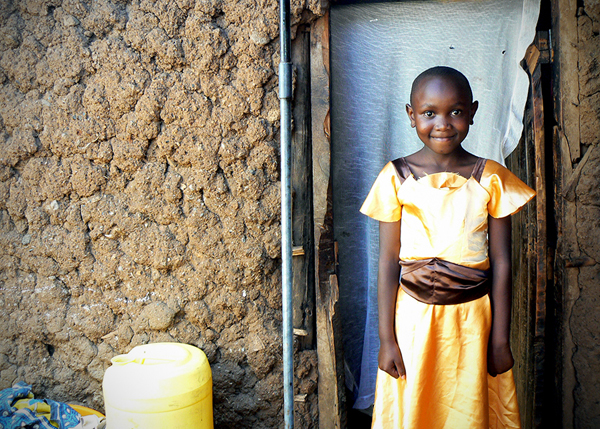 Benta, 11, at her home in Kibera. Photo: Abby Higgins

I first met Jacktone Otieno when I was doing research on women’s rights in Kenya. A group of graduate students I was working with had hired him to drive us to a rural project site.

We became close quickly. I was the only person who spoke Swahili and our conversations broke up long drives through the dusty Rift Valley. When my Swahili stalled on serious topics, his perfect English swooped in and filled the gaps.

“You have to come to my house for lunch so you can meet my family when we get back to Nairobi,” he told me as we stopped at a small roadside town. I nodded eagerly.  “It’s not far from your apartment,” he told me, “we live in Kibera.”

When he said that, everything about my perception of him shifted. His perfect English, his neatly pressed clothing, his easy sense of humour – none of it resonated with what I knew about Kibera, the largest slum in Kenya.

Slum statistics
The Kibera I’d heard about, but had never visited, was a sprawling, ramshackle settlement built from materials cast off by the rest of the city. Cramped alleyways and mishmash structures lean into and grow out of each other.

Population estimates range wildly from 200,000 to over a million people.  It was like different city – lawless, crime ridden and full of diseases I was pretty sure I hadn’t been immunised for.

Around the world, one billion people – one in every six of us – live in slums like Kibera.

This number grows constantly as 200,000 people move from the country to cities every day, most of them settling in slums. No formal systems of clean water, sanitation, healthcare or schooling exist because, as far as governments are concerned, residents are squatters. 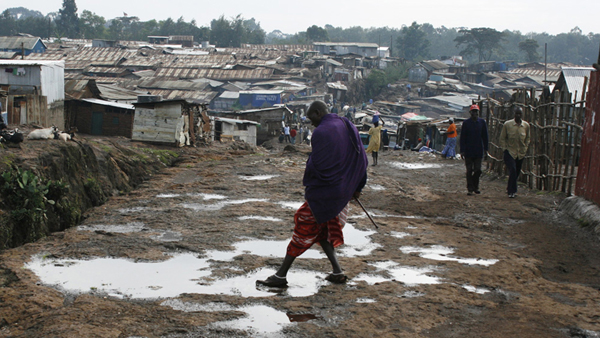 A Masai man cleans his shoe in a puddle in Kibera. Masai, known to be fierce fighters, are often employed as personal bodyguards inside the slum to walk residents home late at night. Photo: Alex Stonehill

The real Kibera
A couple of weeks after our first encounter, Otieno and I met in downtown Nairobi and he took me by minibus to the edge of Kibera.  I was genuinely excited to meet his family. But another side of me was morbidly curious to see the poverty I’d heard so much about.

Otieno led me down a cramped alley that made up one of the many entrances to the slum. We turned a corner, and he extended his arm outward like he was presenting a painting.  “Here it is, we’re home,” he said.

Kibera stretched out in front of us, massive. It was a sweeping valley of rusting corrugated iron, unlike anything I had ever seen. From above it looked peaceful, quiet, and uninhabited.  We crossed a dribbling brown stream to enter the slum and everything came to life.

Kids careened down the rocky, dirt streets at full speed, giggling and weaving between food stalls, chickens and mangy dogs. Music soared out of a set of speakers at a record store.

I was surprised by all the businesses. It hadn’t occurred to me that Kibera would be a thriving economic hub. There wasn’t a square of street front property unoccupied by activity: pharmacies, butchers, restaurants, grocery stores, and cell phone shops lined the streets. 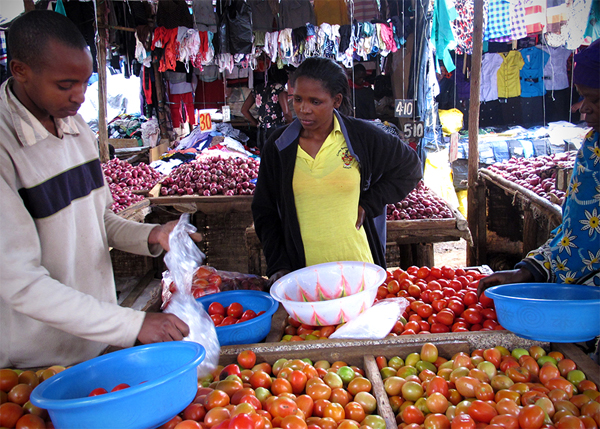 We entered a narrow compound of ten or eleven overlapping houses.  “Dad’s home!” Two toddler twin boys shrieked, colliding into Otieno’s legs as we approached the house. We ducked into a doorway formed from mud packed walls.

As my eyes adjusted, darkness gave way to a room filled with activity. Cynthia, the eldest daughter, was preparing beef stew for lunch. Her mother Joyce emerged from behind a curtain that made a partition behind which the family slept. Two children from next door hunched over a toy car in the corner of the house.

I paused at the doorway taking it all in. It was really pretty idyllic; the kind of family scene many of us aspire to.  Plates clattered to the wooden table as Joyce set a steaming bowl of stew and ugali, cooked maize meal, in the center of the table. 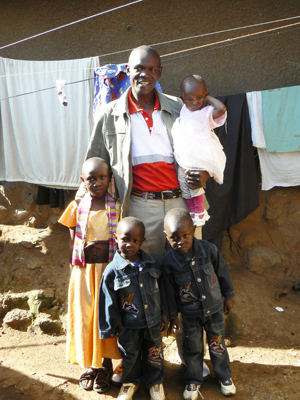 Otieno with his children (from left to right) Benta (11), Blesssing (3), Gift (3) and Abigail (1) outside their home in Kibera. Photo: Abby Higgins

“Cynthia wants to be a journalist when she grows up,” Otieno told me about his eldest. Her younger sister Benta giggled. She’s at the top of her class in an elementary school in Kibera.

But the Otieno family isn’t immune to the difficulties of life in a slum. Otieno wishes he made enough money to move them into a safer part of Kibera.  The family hadn’t planned for a fifth child, but recently had one when a local pharmacist sold them counterfeit birth control, stretching their tenuous budget even further.

“Kibera has its problems, but it’s a good place to live,” Otieno told me slicing into the thick pile of ugali. “At least [here] you can get a little bit to get by. Back at home it’s really hard to survive.”

Otieno struggled when they first moved to Nairobi from the rural village where he grew up. He didn’t have any skills and turned to petty crime to make a living.  More than once, he stole a cell phone from the wrong person and had to limp two hours back to Kibera after being beaten almost to death.

A cousin helped him pay for driving school. Armed with a license, he was able to get jobs driving tourists on safaris through Kenya’s National Parks. Two years ago he opened his own safari business.

After lunch, the entire family climbed into Otieno’s oversized van so they could drive me home.  We watched Kibera pass by outside the windows. It was early evening and the crowds streamed in from their jobs in the rest of the city. Men in business suits picked their way through the streets, grabbing up last-minute items before settling home for the night. It was peaceful, even beautiful.

Accepting slums are here to stay
As I watched, I thought about why slums make so many of us anxious. Why we’re so fascinated by documenting their tragedies and trying to solve their problems.  I realised that the way we talk about slums—the squalor, the sewage, the gripping poverty—is a way to distance ourselves from a reality that hits too close to home.

Slums are the living, breathing results of an overstretched planet. They are the direct reality of the pollution, the overpopulation and the urbanisation we talk about a lot but rarely see first hand.

For the first time in history, more people in the world live in the city than in the country, and a third of those urban residents live in slums.  Whether we like it or not, they may be the future of our planet.  If we have any hope of surviving this new global reality, we have to stop looking away.

Check back next week for Part Two.