Yesterday, the United Nation’s Environmental Program (UNEP) launched an atlas with over 300 satellite images from across Africa. An interactive GoogleMap on UNEP”s website allows you to browse through these images and read about how factors like climate change, population growth and conflict have transformed the African landscape over the past thirty years. The images capture well-known environmental hotspots, such as the disappearing glaciers on Mt. Kilimanjaro and the receding shoreline of Lake Chad and also hundreds of less-known examples such as deforestation in Rwanda’s Gishwati Forest Reserve . Demographic trends are also covered-satellite images of Dakar, Senegal show how rural-to-urban migration since the 1960s has led to a massive expansion of the capital city. By 2005, Senegal’s urban population had surpassed its rural one and by 2030, two-thirds of Senegal’s population is expected to be living in cities. 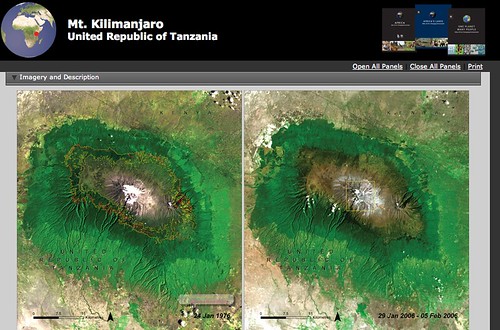 These images have important implications for development. Many of the photos confirm what we already know: in Africa, climate change is not some future phenomenon slated to impact the next generation – it is happening now. The effects of water scarcity, deforestation and desertification are already being felt across the continent and are only going to increase. For example, 75-250 million more people in Africa are projected to be exposed to increased water stress due to climate change by 2020. The atlas also shows how dedicated policy measures can help counteract environmental damage: in the Tahoua Province of Niger, for example, farmer initiatives focused on protection and planting of trees has helped offset deforestation and the area now has 10-20 times the trees it had in the 1970s. UNEP says that this land transformation has reduced drought vulnerability and will help people diversify their livelihoods so as not to rely solely on rain-fed crops.

You can download the full atlas here, and be sure to check out the GoogleMap feature to click through satellite images from around the world.