UK aid will need to do more, with less money — due to a shrinking economy with looming cuts in government budgets, the Department for International Development (DFID) merger with the Foreign Commonwealth Office (FCO), and the need to tackle the increasing global challenges from the COVID-19 pandemic.

The UK has a world leading commitment to spend 0.7% of gross national income (GNI) on official development assistance (ODA) enshrined in law. This means that when the economy is doing better, we pay more, but when the economy is struggling, we need to spend less on ODA. As a result of COVID-19, the UK economy is shrinking, meaning that UK aid must also be cut too.

In making these cuts, the Foreign Secretary Dominic Raab, who will control 80% of the UK ODA budget when DFID is merged with the FCO, has some tough decisions to make. We must ensure Dominic Raab has the data he needs to make surgeon-like cuts, whilst improving the quality of aid spending across all government departments to ensure our aid delivers for the world’s poorest people and UK taxpayers.

That’s where ONE’s Real Aid Index comes in. It breaks down the performance of each UK government department that spends more than £50 million of ODA each year. It also looks at several of the biggest funds that spend aid but sit across several departments.

What the index tells us

The index assesses how well the departments and top five programmes from each department are doing against ONE’s Real Aid Charter. Looking at their performance in the areas of poverty focus, effectiveness, and transparency, awarding them a ‘green’, ‘amber’, or ‘red’ rating. 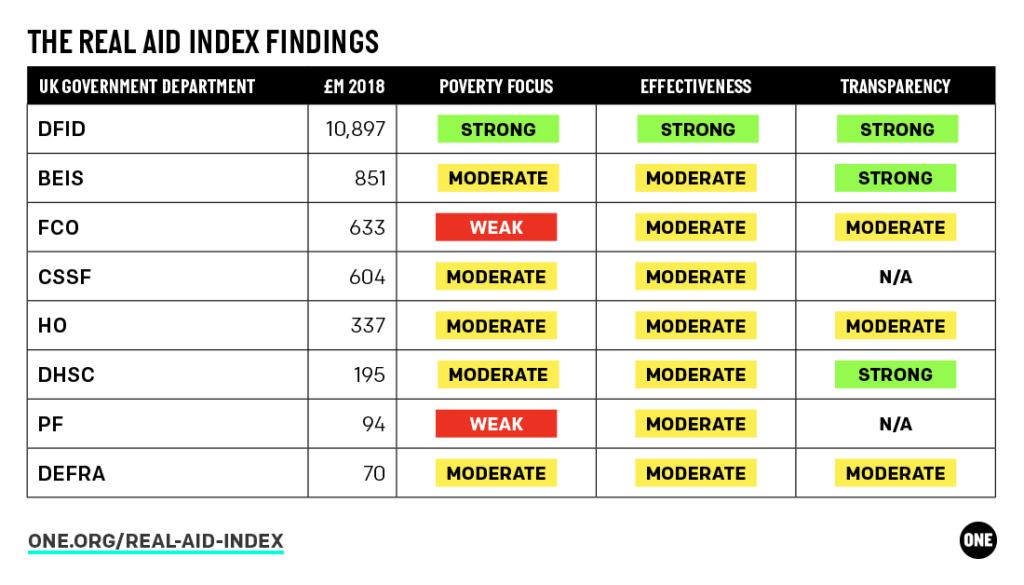 The results of the index show a mixed picture, with departments and programmes performing at different levels in various areas. DFID performed the best across all three areas, scoring green in everything – which demonstrates again how the new Foreign Commonwealth and Development Office (FCDO) must ensure that DFID’s expertise in delivering real aid is retained.

Other departments, such as the Department for Health and Social Care (DHSC) and the Department for Business, Energy and Industrial Strategy (BEIS), also performed well in transparency, as it is easy to track how they spend their aid.

Doing more with less: Where UK aid should be cut

The ONE Real Aid index has identified £1.6 billion of UK aid spending that does not demonstrate that it is delivering value for money for UK taxpayers or the world’s poorest people.

This should be where the foreign secretary places his focus first, to cut programmes that don’t reduce poverty or provide value for money for the UK tax payer. These include:

Our index tells us that the government needs to consistently meet high standards for aid spending, regardless of who is spending it. The British public are rightly very suspicious of public spending that doesn’t do what it says on the tin, and UK aid is no exception.

Dominic Raab now has a £1.6 billion opportunity to show he can be a champion of value for money for UK taxpayers, tackle bottom billion extreme poverty, and show that Britain can be a force for good in the world, smartly investing aid in the UK’s long-term national interest. The government should use this moment to require all departments spending significant amounts of ODA to perform to the highest level and ensure their aid is ‘real aid’.

As our index shows, some UK aid does not meet the standards of being poverty focused, effective, and transparent. The upcoming cuts are the chance to make sure this happens.