“Open government is so fundamental to being human that the arc of human history, driven by the everyday actions of millions of people across the world, will inevitably bend towards openness.”
(Rakesh Rajani, 26th September 2012 – OGP 1st Anniversary – An open government takes humility). 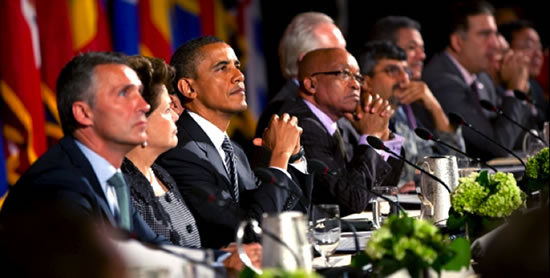 World Leaders, including Rakesh Rajani, at the launch of the Open Government Partnership in 2011

What is Open Government and Why Does it Matter?

In little over a year, 57 countries from all around the world, north and south, east and west, have signed up to the OGP, demonstrating that open government – and the principles that lie behind it – is seen as something that can help all sorts of countries to address the challenges that they face. No matter what the country, the key to success – to fighting poverty, to achieving prosperity, and to realizing human dignity and freedom – is to be open to improvement, and, to use information to make those improvements.

Why do the Principles of Open Government Matter for the Post-2015 Development Framework?

The Millennium Development Goals (MDGs) have contributed to amazing progress in the fight against global poverty. But the existing MDGs – as with any institution – have significant room for improvement. Perhaps their major weakness has been that information about what resources governments have spent in pursuit of the goals, and about what results have been delivered, has been patchy and slow to be reported. For instance, when the International Budget Partnership asked 80 countries for basic information on spending on a number of key international development commitments – on maternal mortality, on aid flows, and on environmental issues – only one country, New Zealand, was able to provide the answers (see internationalbudget.org here for more info).

The poverty of information about the MDGs – and the lack of citizen input into their design – has contributed to limited citizen engagement, limited accountability and few opportunities for continuous learning and course correction. This needs to change. As Francis Maude, the Cabinet Minister heading up the Open Government Partnership for the UK puts it: Information is the raw material of the 21st Century. With citizens increasingly able to access, use, combine and share information, using new technologies, the possibilities for real-time monitoring, participation, feedback, accountability and learning are huge. By harnessing the power of information, promoting participation, and enabling accountability, the post-2015 development framework can contribute to a dramatic acceleration in the rate of progress against poverty and towards prosperity.

Open government – transparency, participation and accountability – might feature in the post-2015 development framework in a number of ways.

In thinking about how aspects of open government might best feature in the post-2015 development framework, there are perhaps two key questions to consider. First, whether the focus should be on information/transparency, or the principles of open government, or the tricky terrain of “Good Governance” with its normative agenda and patchy evidence base. Second, whether any principles that might feature – about information, or open government, or governance – should feature as principles underlying each sectoral goal, and/or as a stand-alone goal.

As keen supporters of the Open Government Partnership and proponents of transparency, participation and accountability, we at ONE have our views; access to information – including information about spending and progress towards meeting the goals – must be at the heart of the post-2015 development framework, with attention given also to the capacity of citizens and accountability institutions to use that information to hold governments to account. But, we aspire to be open; let us know what you think in the comments!