For decades, farmers in Sub-Saharan Africa have been struggling to produce enough food from the land they have.  But in Eastern Kenya, more than 50,000 farmers are now using a clever new technique that prevents pests and weeds from destroying crops.  The results are pretty amazing.  The system, called ‘Push-Pull’, is now being redeveloped to tackle the additional pressures on food security brought about by climate change. 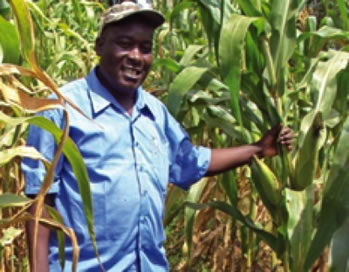 The ‘Push-Pull’ system, originally developed over 20 years ago by the International Centre for Insect Physiology and Ecology (ICIPE) works by mixing plants that ‘push’ pests and weeds away from the crop and others that ‘pull’ pests to border areas to lay their eggs where they cause less harm.

It’s a simple but revolutionary idea that can almost double the amount of food farmers can produce from their available land.    What’s more it’s cheap enough and doesn’t require complex technology that would put it out of reach of smallholder farmers.  The system uses locally-available plants and fits well with traditional African mixed cropping systems.

“I have experienced tremendous improvement,” boasts Emai Ikapolok David, a farmer from the North Teso District in Kenya. “Before, I used to get 50 kg from a 0.4-acre plot, but now with push-pull I get 540 kg of maize from the same plot. My soil fertility level has also improved and there is a clear decrease in striga (a type of weed) and stemborer (a pest) in the garden.”

The community has also benefitted from a feeling of greater security.  “Theft cases have reduced because everybody has enough to feed on,” says Eric Odhiambo, Sub-chief of Ginga Sub- Location in Siaya District.

But farmers in Sub-Saharan Africa, and around the world are facing a new threat from global climate change.  The rising uncertainties in the region’s rain-fed agriculture have created more demand for ‘push-pull’, and its further development to help crops withstand the increasingly adverse and changeable weather conditions.

In March 2011, ICIPE launched a project called ADOPT (Adaptation and Dissemination of the Push-Pull Technology to Climate Change).  The €2.9 million, EU-funded project aims to create a drought-tolerant form of Push-Pull.  The aim is to reach one million farming households by 2020.

“Thanks to the funding we have received from the EU, we have been able to do further research and to reach more farmers and more countries,” Zeyaur Khan, ICIPE project coordinator of ADOPT says. “Through our research, we found [push-pull] plants that are better than previous used plants,” says Khan. “They can survive a very long period of drought.”

The ADOPT project will directly benefit 50,000 smallholder cereal and livestock farmers. It will also improve food availability for half a million people living in areas that are dry and vulnerable to climate change in Kenya, Tanzania and Ethiopia.

The results are impressive. “The deployment and adoption of a drought-adapted Push-Pull has increased yields by three times,” Khan says. “In the long term it will also improve the soil fertility. Farmers won’t have to use fertilizers anymore.”

Without EU funding, Khan says ICIPE wouldn’t have been able to adapt the Push-Pull technique to climate change.  “Other donors are funding only the standard push pull,” he says, “so this funding is very very important for us, for the countries we are working in, and for smallholder famers facing long drought and who cannot produce enough food for themselves.”

The International Centre of Insect Physiology and Ecology (ICIPE) is an international scientific research institute headquartered in Nairobi, Kenya. ICIPE’s mission is to help alleviate poverty, ensure food security and improve the overall health status of peoples in the tropics by developing and extending management tools and strategies for harmful and useful arthropods, while preserving the natural resource base through research and capacity building.