Mikiko Imai works for ONE in Japan. She’ll be reporting in throughout this week on the 2008 G8 Summit in Toyako. 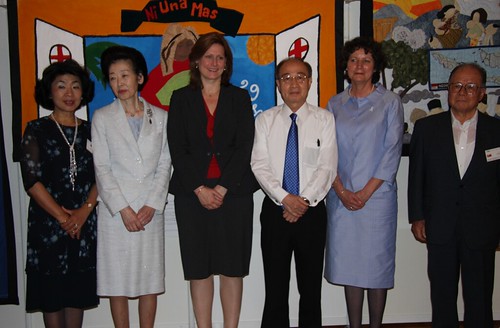 I’ve just come back from an afternoon tea party on maternal health issues hosted by the wives of two G8 leaders – Mrs. Sarah Brown, wife of the British Prime Minister and Mrs. Kiyoko Fukuda, wife of the Japanese Prime Minister. Mrs. Brown, a Patron of the White Ribbon Alliance, flew in a day earlier than her husband (who’s coming to Japan for the G8, just in case anyone’s wondering…) to talk about maternal health alongside Mrs. Fukuda.

In Mrs. Brown’s speech, she talked about the devastating situation surrounding expectant mothers, babies and infant children in developing countries and how neglected this issue is – the global goal to reduce the number of mothers dying in childbirth by three-quarters by 2015 has made absolutely no progress. She cited the global shortage of 4 million health workers and appealed for the G8 to answer to the calls to secure the investments in women’s health care needed to save lives at the forthcoming Summit in Hokkaido.

Mrs. Fukuda talked about how Japan had managed to overcome high levels of maternal mortality in the recent past and raised the success of the Boshi-Techo (Mother and Child Health Handbook), a book that allows pregnant women and mothers to track their pregnancy and baby’s growth. This initiative started 60 years ago when Japan had a devastatingly high maternity death rate and has had remarkable success since.

After hearing the speeches, there was a traditional English tea (it was at the British Embassy…) and a chance to view an exhibition of beautiful but disturbing quilts made in memory to mothers lost from all over the world. Every piece of quilt had a personal story to it. One quilt depicted a pregnant woman bleeding to death – her name was Khatiza Mai from Pakistan and she had no health care during her pregnancy. As I left the embassy complex, in the middle of sunny Tokyo, I tried to imagine myself in her situation. It was hard – I was born in a modern hospital. Apparently in many developing countries families say goodbye to a woman when she goes into labour – how long will it be before all women are free not to see childbirth as a potential death sentence? I hope the G8 will make progress this week…