Peter Tabichi was only known to his students and fellow teachers at Keriko Secondary School before 2019. Going over and above what is taught in Kenya’s education curriculum, the Franciscan Brother has made it his mission to go the extra mile – even donating 80% of his income – to equip his students with the necessary skills to succeed in school and life.

To some, he is the parent they don’t have; to others, he is the friend that sticks closer than a brother.

Peter’s drive to see his students succeed, his passion for education, and his creative ability to overcome challenges won him the prestigious Global Teacher Award in 2019, bringing him worldwide recognition that led him to meet President Trump in the White House and Pope Francis at the Vatican, among many world leaders. Dinners and lavish celebrations were held in his honour, speeches were made, and newspapers headlined.

But unlike many who would bask in the glory of the accolades received and change their career to one familiar with red carpets and camera flashes, Peter returned to Keriko Secondary, a day school located in the remote Pwani Village in Nakuru County, to do the one thing he loves the most – transforming lives through education. 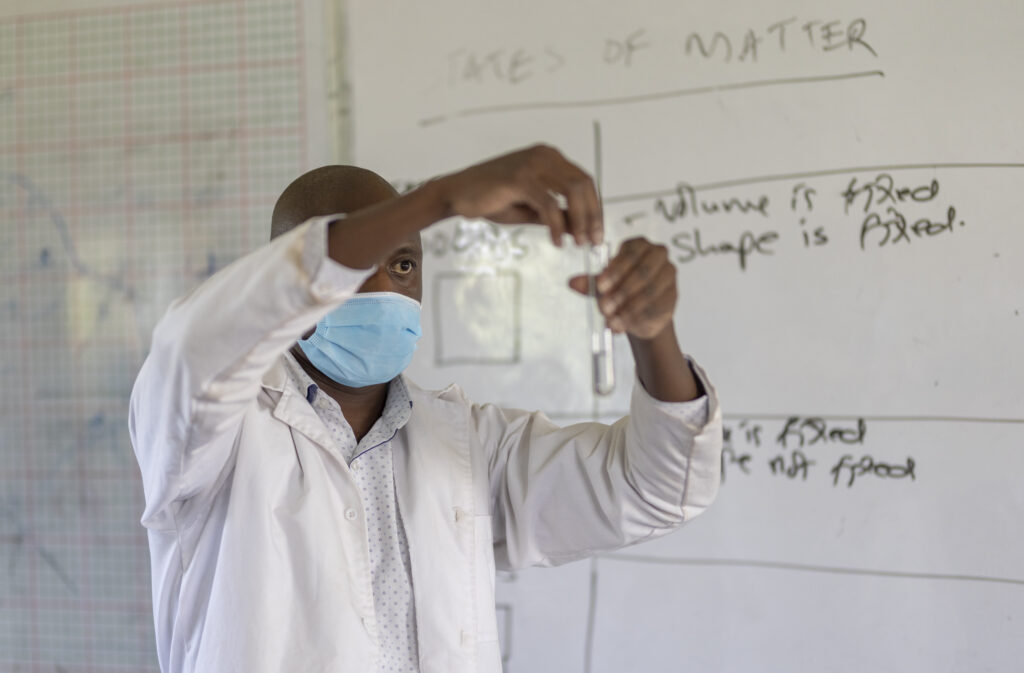 Peter Tabichi teaches a Physics lesson in a Form 1 Class at Keriko Secondary School in Nakuru County, Kenya in (May 2021).

A passion for education

Peter comes from a lineage of teachers — His father, uncles, and cousins are teachers too. In many rural towns in Kenya, including Njoro where Peter grew up, teachers are held in high esteem. They are sought after when people want to make key decisions, like political choices during elections, investments, and even solving domestic disputes. Making the decision to become one was not a difficult one for Peter, and it is one that he has enjoyed living with for more than 10 years, teaching at four schools in Kenya and Uganda, before ending up at Keriko where he has been since 2015.

Keriko, however, isn’t an easy school to get to. The roads leading there are not paved and are hard to commute on, especially during the rainy season. This doesn’t deter the students, a majority of whom come from less privileged backgrounds, from walking or cycling several kilometres to get their education. For a majority, education is the key they hope will move them out of the poverty they have become familiar with. Peter believes this too, and you can sense it in every lesson he teaches.

Mathematics and physics are Peter’s subjects. They are not the most loved, but he injects fun and creativity when teaching them to make sure his students enjoy the transfer of knowledge. And enjoy it they do. More importantly for Peter, they feel inspired to leave school as change agents and problem solvers. 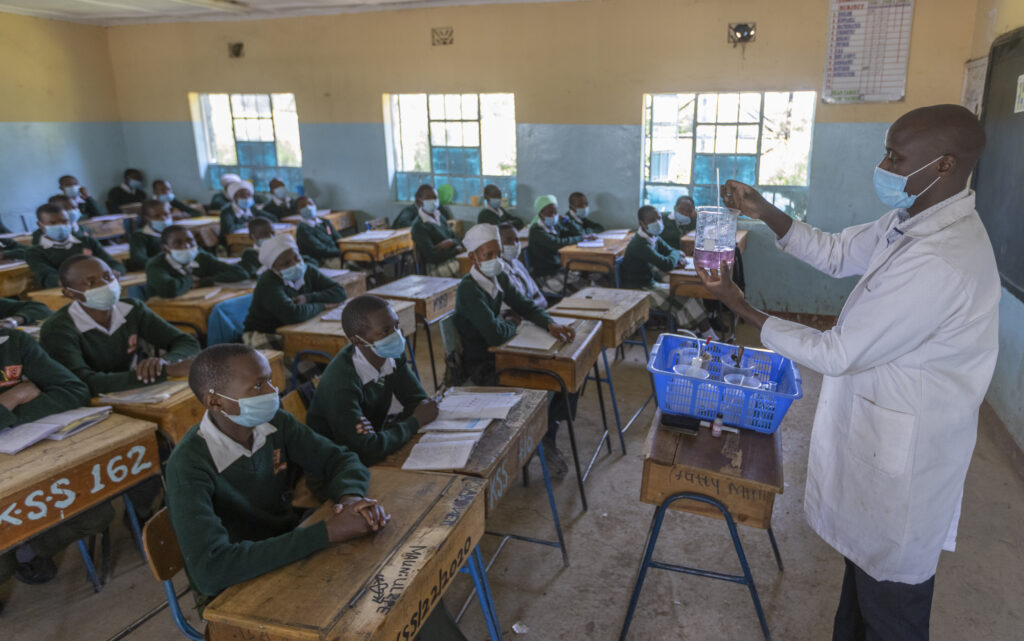 Peter Tabichi teaches a Physics lesson in a Form 1 Class at Keriko Secondary School in Nakuru County, Kenya (May 2021).

Facing the challenges of COVID-19

In March 2020, the Kenyan government ordered all schools to close to minimise the spread of COVID-19. . Learning was to continue online for those with the means and ability. Unfortunately, many students in Keriko had neither.

Coming from homes where the price of a basic smartphone matches monthly food budgets, many students started giving up on education and were drawn into farming and small chores to make a little extra money.

Peter, however, came up with a solution to make sure learning continued despite the challenges.

Using his own money and donations from friends from far and wide, Peter acquired 30 smartphones and gave them to his students. He also saw to it that each smartphone recipient received weekly mobile data bundles to enable them to connect to the online learning platforms that were being used.
Because this is the first time many were using smartphones, Peter knew that online safety for his students was paramount. Each student’s online activity was restricted and attendance of lessons was monitored throughout.

But it wasn’t only about education. With mobile phone access, Peter and the other teachers were able to offer counselling, guidance, and psychosocial support to 35 students on a regular basis.

Through the donations received, Peter was also able to get foodstuffs for students who needed it, writing materials, sanitary pads, and financial tokens of appreciation for the four teachers who participated in the online program. 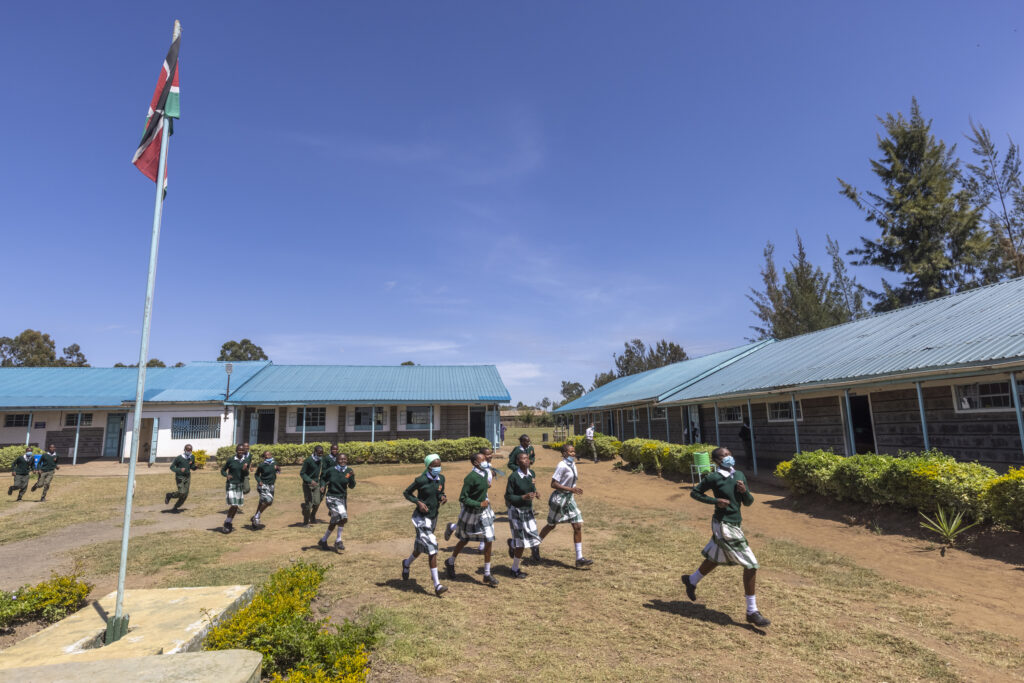 Pupils at Keriko Secondary School in Nakuru County, Kenya, run back to class after a break (May 2021).

Returning to the classroom

When in-person learning resumed towards the end of 2020 after a six-month break, not all students returned to school. For female students, in particular, some had become wives and dropped out of school, while others had become new mothers. Under the Ministry of Education guidelines, students who become mothers cannot be denied an opportunity to continue with their education. The challenge, however, is the stigma and shame that comes with being a student while nursing an infant at home. Peter attributes the early marriages and pregnancies to a lack of counselling and guidance, which many students receive in school but not at home.

With the new academic year commencing in July 2021, Peter looks forward to welcoming new students to Keriko. In them, he sees the opportunity to impact more lives, not just by teaching them mathematics and physics, but inspiring them to overcome the challenges life throws at them, and becoming world leaders – just like himself.