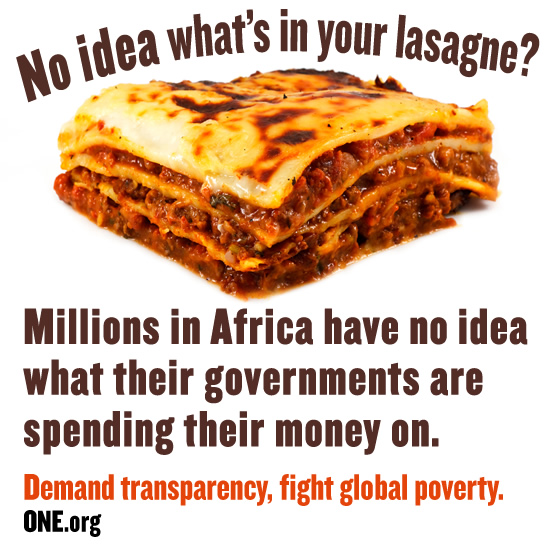 The horsemeat scandal shows how hard it can be for people to keep track of what goes into the food that they put on their plate.

Faced with a complex web of transactions, it’s hard for people to make sense of what’s going on. This is a big deal – people should be able to know what they’re eating.

In developing countries there is a different kind of secrecy that’s worse. Far worse. In four out of five countries covered by the Open Budget Survey, governments don’t provide their citizens with enough information to make sense of their national budget.

The problem is particularly pronounced in countries that have an abundance of natural resources such as oil, gas and minerals. This means that people can’t see how their resources are being used – whether they’re being wisely invested in health, agriculture and education, or whether they’re being siphoned off to the accounts of corrupt leaders. This needs to stop.

ONE campaigns for more transparency in the fight against global poverty, so that people in developing countries can hold their governments to account and take control of their lives in a future beyond aid.