The following is the second of our guest blog posts from ONE Student Activists: Shahban Aziz joined us in London after winning a competition to recruit signers for our Lifesaver petition.

Nelson Mandela famously said “our human compassion binds us; the ONE to the other”.  This is why I joined ONE. This is why 143,021 people signed the petition to help protect lifesaving European Aid. This is why I was invited to Downing Street. To join hands for ONE common goal and to effect change with ONE voice. 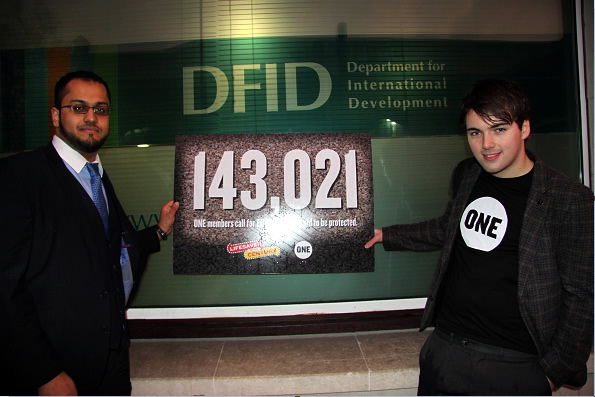 With 27 EU leaders meeting this week for EU budget negotiations, the ‘Lifesaver of the Century’ petition reminds these influential figures of the positive effect of international aid.  The petition urges EU leaders to protect the level of international aid proposed in 2011 to ensure tens of millions of the world’s poorest benefit from education, healthcare and improved access to clean water.

My compassion for humanity fueled my desire to push forth the ONE petition onto the global forum. Registering interest from all corners of the world, I succeeded in getting the most signatures for the petition and was invited to personally deliver the petition to 10 Downing Street, alongside fellow Student Leader Billy Hill.

In the howling wind and pouring rain of a typical British morning, standing on the hallowed grounds of Downing Street, I felt humbled to represent the 143,021 ONE members who had united for this noble cause.  We had special permission to hand in a white shirt which symbolised our plea to David Cameron to ‘keep his shirt clean’ and not to make any compromises.

Our next stop was at the Treasury, where we had a special delivery for George Osborne, presenting a giant A1 board with pictures and signatures of ONE members calling for action – it certainly was the first time they had received such a present. The day did not end there as we pushed the petition to all corners of government submitting the petition and another board to the Department for International Development (DFID), which was happily received.

It is an honour and a privilege to make every signature count, representing the views of ONE members and my heartfelt thanks goes out to all those who signed the petition.

As I walked of out the DFID building, I reflected on why I did this; I remembered the words of another hero of mine, Archbishop Desmond Tutu, who encapsulates the situation when he says “because every human being is precious”.