This week ONE and our friends at Cordaid handed in the Trillion Dollar Scandal petition to the Dutch parliament. Over 89,000 European ONE members signed the petition, asking European leaders to pass strong laws on transparency for oil, mining and logging companies.

Last October, the EU proposed legislation to oblige European extractive companies to publish the payments they make to governments where they operate. The Dutch government has stated its support for transparency measures, but it has not specified how strong these measures should be. However, the devil is in the detail of this kind of legislation, and there is huge pressure from the oil and mining industry to weaken the proposed law.

ONE and Cordaid handed the petition over during an official Dutch Parliament session, asking them to ensure the government supports strong measures when the Council of the EU, bringing together the 27 EU Member States, decides on this matter. 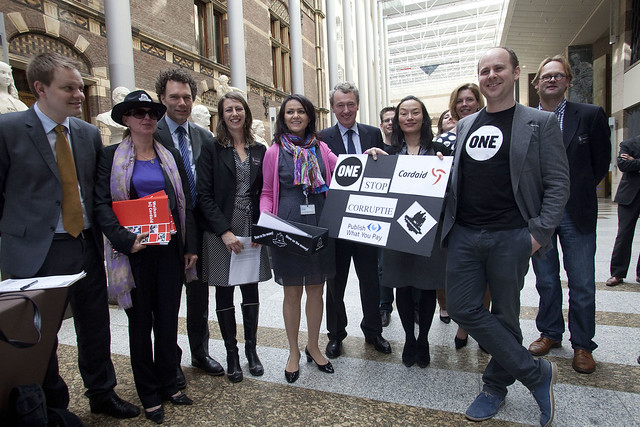 The Netherlands is critical to ensuring European transparency legislation helps people hold their Governments to account. During our meeting with Dutch MPs we asked them to ensure that their Government stop the trillion dollar scandal allowing corrupt practices to be brushed under the carpet.

Presenting the petition in the Netherlands followed similar deliveries earlier this month in the UK, France and Denmark.

Please make your voice heard and sign our petition or write to your MEP asking him or her to do the right thing!