Tomorrow, EU leaders will meet in Brussels to decide the EU budget for 2014-2020, including the proposed €51 billion of lifesaving EU aid to the world’s poorest.

But proposals for smart European aid are under serious threat. At the last summit in November, proposed development assistance to the world’s poorest was slashed by €6.1bn.  And some leaders want to make even deeper cuts that could take funds below current spending levels: this would have a devastating impact.

Ahead of this week’s critical talks, ONE members from all over Europe have been rallying to ask European leaders to protect lifesaving EU aid at the proposed levels. 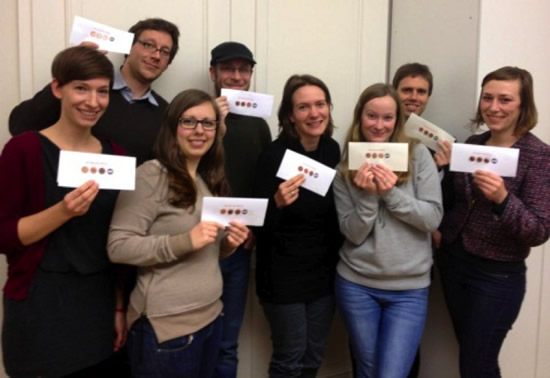 In the next step of our Lifesaver campaign, ONE estimated that it would cost just 3 euro cents (or 2 pence) per week, per EU citizen to reverse proposed cuts to aid for the poorest. ONE members have therefore decided to make their small change count! In the UK, over 2000 ONE members have asked for postcards to send their 2 pence to Prime Minister David Cameron urging him to protect proposals for lifesaving EU aid in the budget negotiations. In Germany, ONE members have sent postcards to Chancellor Angela Merkel, adding their 3 cents. In Brussels, the team collected by hand over 230 postcards for President of the European Council, Herman Van Rompuy including around 60 Brussels-based interns and young professionals who came to our meet-up last week. ONE Brussels hand delivered postcards to Van Rompuy’s staff and passed on the message that Europeans are counting on him to ensure their voices are heard. ONE has also started handing in postcards to the other European governments at their embassies in Brussels.

In France, as part of the French version of ONE’s Lifesaver campaign, “sauveteur du siècle”, ONE members have mailed more than 500 postcards to President François Hollande, urging him to make sure that, in Winter sales season, EU leaders don’t try to make savings on the back of the world’s poorest.

In parallel, ONE also estimated how much it would cost each government per year to reverse the cuts to the proposed €51 billion for EU aid. For Germany that’s €174mn, for the UK €113mn and for France €154mn – peanuts compared to overall annual government spending.

Beside the “Make Your Change Count” action, ONE has also launched a tumblr blog (in French, German and English), a hilarious take on the serious day-to-day work of Lifesaver campaigners fighting to protect aid in the EU budget.

Finally, in order to help people get their heads around the confusing EU budget figures, we have produced an infographic on what current cuts on the table to the proposal for EU development aid could actually mean on the ground.  The figures are stark: if the proposed cuts are agreed on, 1.9 million less pupils could be enrolled in primary school. If deeper cuts are decided, the impacts would be even worse.  The infographic is also available in French and in German.

Why not help spread the word?   You can start by signing ONE’s petition to protect European aid.

And to learn more about the impact of EU aid on the ground read these 5 stories about successful EU-funded projects in Africa.