As ONE launches its agriculture report, the AU remarks that the new focus should be on investments that make a difference to farmers! Nachilala Nkombo, ONE’s Africa Deputy Director, reports from Addis Ababa. 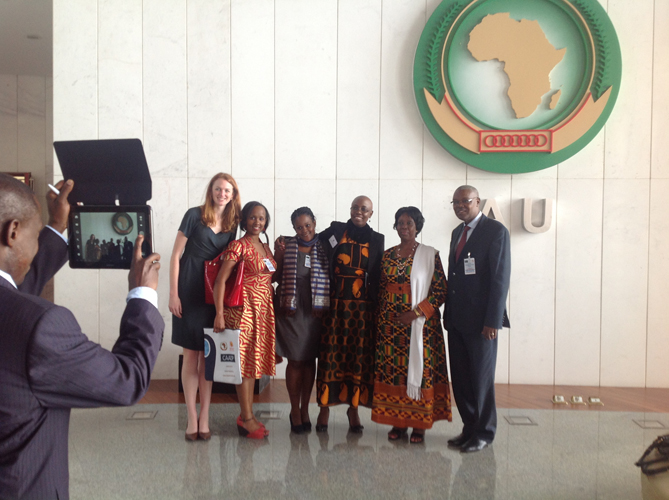 This week, 300 or more people gathered in the African Union’s headquarters in Addis Ababa to galvanize momentum around African-led agriculture. In the same hall that African heads of state will make the major decisions that affect the possibilities of increased food production and increased rural income in January 2014, ONE was invited to launch our newest report: “A Growing Opportunity: Measuring Investments in African Agriculture.”

I had the honour of sharing ONE’s findings from this report alongside African policymakers and farmers. Together we urged African leaders to meet their commitments to invest at least 10 percent of their budgets in agriculture. The launch was a major highlight of the Africa Union/NEPAD 9th CAADP Partnership Platform (PP) meeting, an annual conference that convenes policy makers, agriculture experts, donors and small scale farmers to discuss the hot issues affecting agriculture on the continent.

This launch coincided with the 10-year anniversary of the landmark Maputo Declaration by the African Union government to revamp the agriculture sector through increased public investments. In this report, we measured performance of 19 African governments against the benchmarks in this declaration.

The reports highlight both good and bad news from the continent. The good news is that progress is undeniable, and 24 countries are taking steps to reorganise their agriculture sector in line with CAADP standards. Eight African countries are on their way to reaching the goal to halve poverty by 2015, and investment in agriculture is translating into growth in 13 African nations.

The bad news is that the Maputo public financing commitments are off track. While nine countries have made some increases to their national budgets since 2003, only four countries have met the Maputo target to invest 10 percent of national expenditures in the support of agriculture.

These include Malawi, Ethiopia, Cape Verde and Niger. Alarmingly, nine countries reduced their levels of agriculture expenditures during the assessment period. The report also found that donors were off track in terms of fulfilling their full US $22 billion L’Aquila pledge, only half of what was promised has been disbursed since 2009.

After I delivered our findings, it became clear to the audience that there was a need for urgent action by African governments to increase public investments in agriculture, if Africa has to ensure food security and job creation on the continent. The big game-changing moment that all  stakeholders at the meeting are looking toward is the January 2014  AU summit that will mark the start of the African year of 2014 agriculture efforts.

An eminent panel of speakers, comprising of the Ethiopian Ambassador to the AU and UNECA H.E Ambassador Kongit Sinegiorgis; the Malawi Agriculture Deputy Minister Hon. Ulemu Chilapondwa; the AU Commissioner for Agriculture and Rural Economy, Mrs. Rhoda Peace  Tumusiime; and a farmer  from Nigeria, Sara  Yapwa joined me in bringing some home truths to the report .

Ambassador Sinegiorgis was proud to note that Ethiopia has been listed in the report as among those countries that have met and exceeded  both the  CAADP 10 percent budgetary allocation and 6 percent annual agriculture growth rate. She emphasized the fact that agriculture is part of the country’s long-term plan for economic and social transformation, and called on the other governments to do more to boost agricultural production and agribusiness. “We can find the resources needed to close the Agriculture financing gap,” she said.

Deputy Agriculture Minister Ulemu  Chilapodwa attributed his government success on the 10 percent to the decentralization of agriculture services, and the opening-up to NGO involvement in agriculture activities.

I was so proud of ONE to hear Commissioner Tumusiime remark on  how good the report was and how important it is for the African Union Commission to have such independent perspectives on the status of Maputo commitments despite having their own internal Maputo review processes.

“I do not think that there are many other meetings of this nature where this would be allowed,” she said. Noting the urgent need to make agriculture in Africa leap further forward, she threw a couple of challenges to the audience, “We need to focus on investments that make a difference to the farmer. We cannot live by tradition, while Africa’s agriculture potential is noted, we cannot eat potential,” she said.

Africa can use the estimated US$ 50 billion it spends annually to import food to finance agriculture and meet the CAADP funding gap holding back progress in agriculture. She pointed out that as agriculture is strategic for Africa, it just needs to be bailed out as other strategic  institutions are being bailed out every day in the west.

Sara the farmer wondered why half the $22 billion committed by donors has not yet been received. We want to know where the current money goes. “Is it to overheads or to ‘overlegs’ (farming). For policy to be effective, Sara argued that women have to be involved at all levels of decision making.

“If it is not done with us, it is not for us”, she concluded. This year’s CAADPPP also launched the AU efforts towards the year of agriculture. ONE and its partners will continue to focus its  advocacy on the continent on demanding that African leaders live up to their Maputo financing  commitments and that they use the year of Agriculture 2014 as a key moment to recommit to a stronger and measurable Maputo, plus 10 programmes of action that will track agriculture financing, as well as the  impact of this financing on food security, rural incomes, industrialisation and job creation.

I learnt at this forum that CAADP standards are being used to guide development financing in other regions of the world, it’s for this reason that ONE urges donors to ensure that they don’t miss this opportunity to support the implementation of this African framework  that is geared to ensure  agriculture success at national levels.