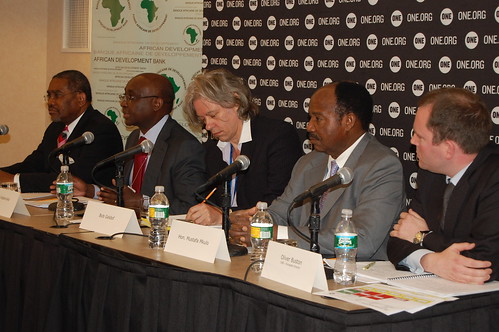 The meeting was held in anticipation of the IMF and World Bank annual Spring Meetings. Both institutions will be making critical decisions to follow up on the details of the G20 commitments and determine what will be delivered and with what conditions. The press conference was focused on how the Spring Meetings can provide low income countries – particularly African countries – with the resources they need to get through this financial crisis as well as build on recent development successes, without creating a future debt crisis.

At the event, Bob described how the economic crisis has continued to marginalize the poor peripheral parts of the world. Interesting, Bob remarked that $5 billion (the amount ONE is asking the IMF to provide to developing countries in grants and loans) is a tiny amount compared to the bailout given out in developed countries. Bob referred to a study commissioned by ONE that shows that by injecting $50 billion to Africa now will would increasing global output by as much as $250 billion. He called for aid to Africa to continue and challenged the group to think about how relatively small change can make a big difference.

Mr. Kaberuka described how Africa, in the past several decades, has been a story of progress and setbacks. He questioned the idea of a “banking crisis.” Rather, Africa faces an economic crisis. Mr. Kaberuka emphasized that the amount needed for developing countries is relatively small – the international community pledged $50 billion at the last IDA replenishment and $9 billion for the African Development Bank. Doubling these could have a significant impact.

Mr. Mkulo, the Tanzanian finance minister, spoke about the effects of the crisis in Tanzania. The economic outlook for Tanzania is now estimated to be 5% growth rate for 2009, down from 7.4% a year ago. The effects are felt across the sectors – cotton producers are stockpiling their goods as orders fall, the country’s tourism has stagnated by as much as 20%. He said that African government are trying to tackle the problems in the domestic economies – taking measures to restore macroeconomic stability, increase surveillance systems, and decrease the cost of doing business–but resources are needed to take these measures. He called on the donors to enable the international financial institutions to provide the capital to assist these measures taken by the African government.

Congressman Meeks made a passionate call for the international community to make a historical agreement to mobilize more money to save the most vulnerable in the world, through the IMF gold sales. He said that the biggest burden is likely to be borne by the most vulnerable in the poorest countries, even though they did not cause the financial crisis. The progress made in Africa over 10-15 years is at stake. There is an opportunity today to make history, he said. An agreement to sell a small part of the IMF gold to create an endowment to finance IMF internal expenses was for a good purpose. But the gold prices are higher now, and there is more profit to be made. These extra profits can go to finance the much needed resources for the poor countries. He concluded his remarks by saying that the “moment for us to act is now.”

After these short presentations, there were questions from a number of reporters. I hope that the powerful messages presented by the four distinguished panelists are reported around the world so that the public can understand the gravity of the impact Africa might suffer if we don’t act now.