Roughly 70% of the world’s population lives in countries that lack budget transparency. That is according to the International Budget Partnership, which this week issued its 2017 Open Budget Survey, the world’s definitive source on the status of budget transparency around the world. The Survey’s findings raise alarm bells, as progress on budget transparency has stalled globally, largely due to concerning declines in sub-Saharan Africa. The results highlight the fragile path of progress when open government practices are not institutionalised. 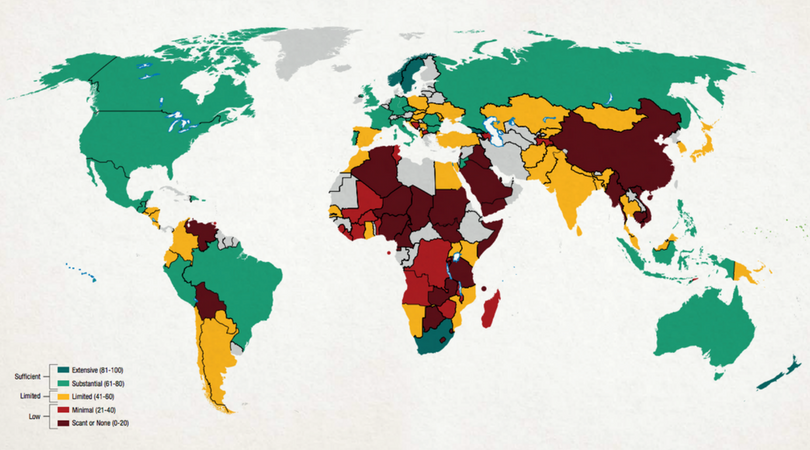 A global picture of budget transparency in 2017.

Budget transparency is critical for enabling citizens to hold their governments to account for the use of public resources. It helps to ensure that funds are managed efficiently and effectively for citizens — for example, by providing quality healthcare, education, infrastructure and social services. Launched in 2006, the Open Budget Survey assesses public budget accountability, participation and oversight across 115 countries in 2017. Countries are scored out of 100 (100 = most transparent) on the Open Budget Index based on the amount and timeliness of publicly available budget documents.

The Survey’s findings reveal a troubling backsliding on budget transparency in sub-Saharan Africa:

The decline in budget transparency in sub-Saharan Africa doesn’t appear to be due to any one factor. It illustrates the need for more consistent demand for budget information alongside the conventional approaches to transparency improvements through public finance laws or capacity building. Part of the decline was exacerbated by the change in the Survey’s methodology in 2017, which now only counts online publications as “publicly available”, excluding hard copy publications, which were included in 2015.

Yet this is no excuse for the low African country scores. In many instances, governments produce the relevant budget documents, but simply do not publish them online (and in some instances, don’t make them available in hard copy either). Open data should be the default format for countries publishing key government documents, particularly for budget documents, to ensure that citizens have access to the information they need to hold governments to account for the use of public resources.

The African Union has heralded 2018 as the year of Anti-Corruption, and 7 African countries (and 3 sub-national governments in Africa) will publish new Open Government Partnership National Action Plans this year. This means that African governments have a golden opportunity to prioritise commitments to increased budget transparency and reverse this regressive trend.

Here at ONE we’ll be using these very same budget documents to develop a budget tracking tool for government expenditure on agriculture in Senegal and Mali. Senegal was the only country in the region that increased its Open Budget Index score by more than 5 points. These budget documents will help us develop a tool to assess how much money is being allocated to important development issues such as nutrition and gender. We will keep you updated on the progress of the budget tool throughout the year as we continue to put open data to work in 2018.