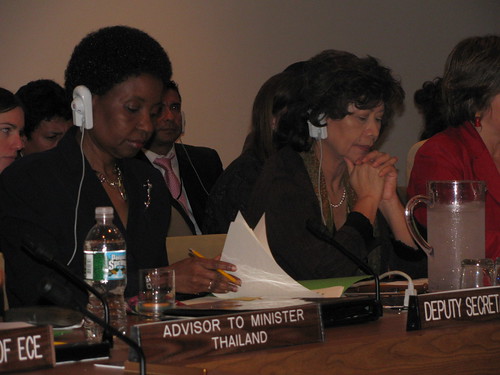 Yesterday afternoon, I attended a side event during the UN Conference to launch the Joint Publication by the five UN Regional Commissions on “The Global Economic and Financial Crisis: Regional Impacts, Responses and Solutions.” Rose Asha-Migiro, the UN Deputy Secretary-General, spoke to the fact that no region in the world has been spared by the financial crisis as all are facing a decline in trade, remittances and capital flows and in turn, rising unemployment and poverty. As stated by Noeleen Heyzer, the Current Coordinator of the Regional Commissions, while the financial crisis is global in nature, enhanced cooperation and collaboration on the regional level will be vital towards addressing the challenges and developing innovative solutions towards recovery. The floor was then handed over for each of the Executive Secretaries of the Regional Commissions to speak about the effect that the crisis has had in their regions.

Mr Abdoulie Janneh, the Executive Secretary for the UN Economic Commission of Africa, argued that while Africa might have been expected to be less affected by the global financial crisis (as it has been less integrated in the global economy and has smaller financial markets), the crisis has already reached most African countries, reducing growth and threatening hard-won achievements in human development. He said that their biggest concern is that donors may reduce Official Development Assistance (ODA) flows to the region, which would reduce the ability of African countries to boost growth and to achieve the Millennium Development Goals (MDGs). As reflected in the report, “Donors will therefore need to honour their existing commitments to enable governments in the region to protect the vulnerable and prevent more people from falling into poverty.” In closing, he pleaded that that Africa’s challenges are too great to face alone and will require international involvement in aid, climate change, investment and trade.

The findings and recommendations for each region can be found in the publication.

Meanwhile, Miki attended the side event called the “People’s Right Before Corporate Profits.” The key guest speaker of the event was Mr. Raphael Correa, President of Ecuador. President Evo Morales of Bolivia was also scheduled to attend the event, but he was apparently unable to come to NY due to technical problems with his official plane. President Correa, an economist by training, expressed strong criticism to capitalism, the structure of the current global financial and trading system for its role in the global economic and financial crisis. He told the mainly civil society audience that the policies of liberalism, that is, free movements of capital, only benefit the multinationals and those at the top. As a consequence, the world is experiencing a “dictatorship of capital” – and ultimately, lower income workers are those who lose out in such a system. He went as far as to say that if he had his way, the International Monetary Fund (IMF) and the World Bank, two bodies within the group of so-called Bretton Woods institutions, would be dismantled. Failing such drastic measures, these institutions, which were set up in the aftermath of World War II, should at least hold less power over the world’s poor countries. His powerful words were welcomed by a standing ovation.