There are lots of barriers standing between girls and education. School fees, uniforms, food and water, and safe travel conditions all play a role in whether a girl can go to school. But there’s another crucial factor that often gets overlooked: access to period products.

Women and girls living in poverty struggle to afford menstrual products. As a result, young girls often miss school during their periods. Some even resort to creating makeshift pads out of torn rags and old newspaper, which can jeopardize health.

While this is still a reality for many girls, South Africa is taking a step in the right direction. In a huge victory, the country will no longer charge taxes for menstrual products! Public schools will also begin providing free sanitary pads to students. These two changes will make it significantly easier for women and girls to access the products they need.

Activists have brought public attention to this issue in the past few weeks. In early October, a group of students rallied to demand an end to the tax. These students adopted the hashtag #BecauseWeBleed, further advocating for the cause on social media. 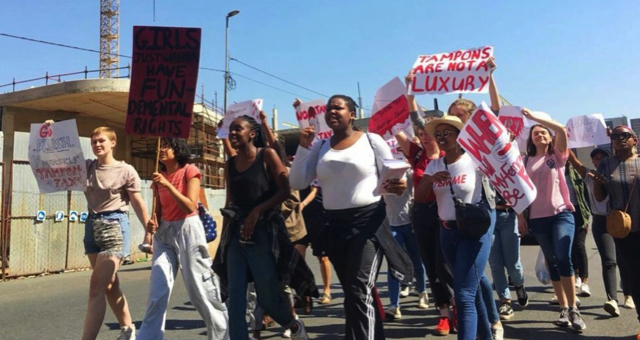 Government officials clearly took note of their actions. Finance Minister Tito Mboweni, who announced the end to the tax during his second week of appointment, said that he received over three thousand tweets in support of abolishing the tax.

South Africa isn’t the first African nation to step up against period poverty. In 2017, Botswana and Kenya began giving free sanitary pads to girls in school. However, these taxes still exist in nations around the world, including the United States and the United Kingdom.

While these three countries have made incredible progress, the fight doesn’t stop here.
No girl, anywhere, should be denied equal access to education. Providing affordable menstrual products is one of many changes that need to happen for girls to unlock their full potential.