At just 13-years-old, Siyabonga Khusela was confronted with the reality of gender-based violence (GBV).

After a fight with Siyabonga’s step-father, Siyabonga’s pregnant mother arrived at the hospital to deliver her baby. With high blood pressure and other injuries, “she passed on,” Siyabonga said. “The least that the doctors could do was to protect my baby brother.” He was just 13-years-old when he lost his mother to gender-based violence. His mother was 37 and left behind four children. 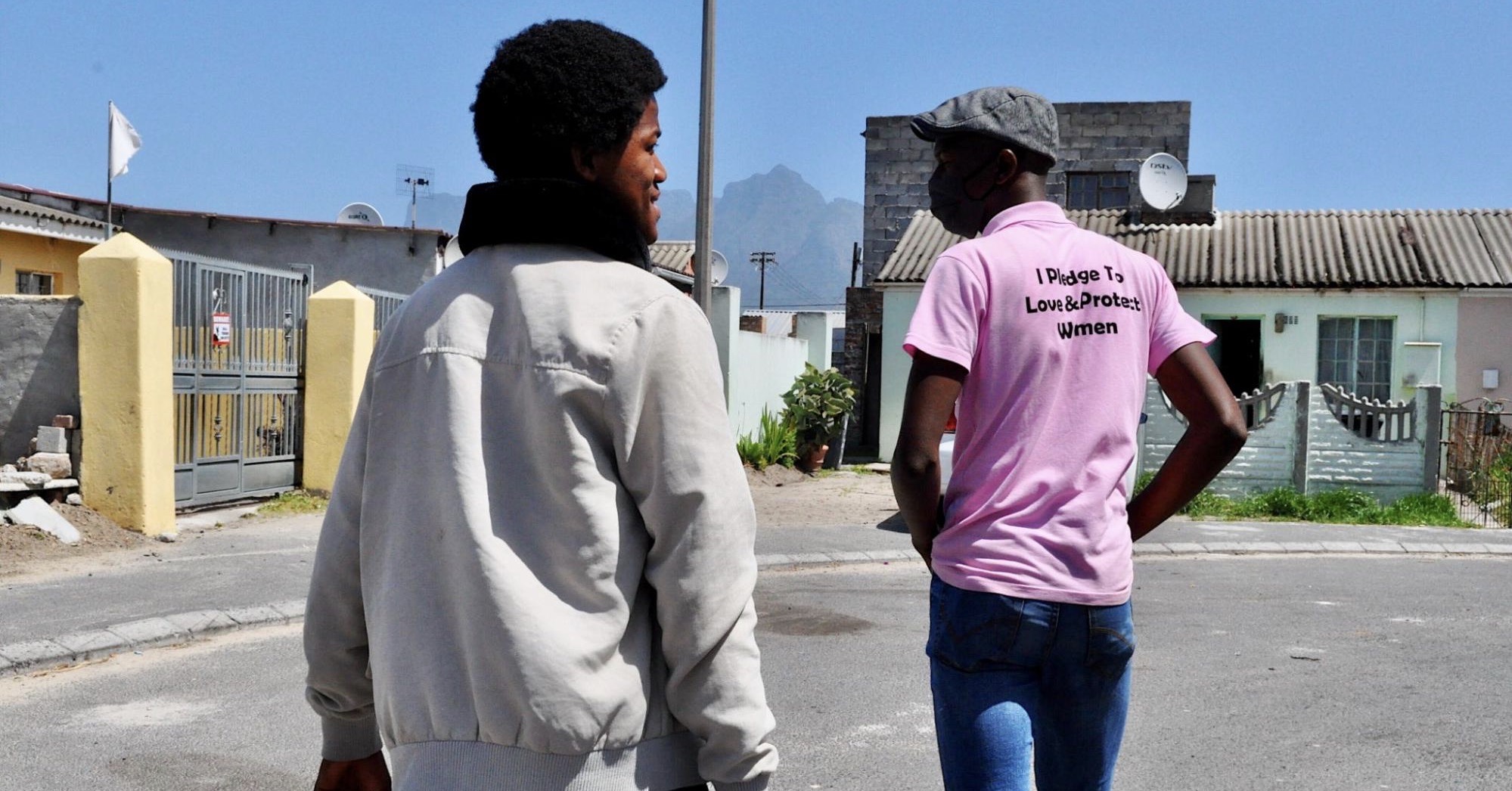 “After I lost my mother, that opened my eyes that I cannot sit and do nothing while watching women and children being violated by men, my gender,” Siyabonga said. “I realized that I have a huge responsibility in this country to protect everyone, and also to make this country better than before.”

“I didn’t want to be like my stepfather,” he said. “After that, I had no one to call my role model, or someone who was mentoring me.” So he decided to take action himself and stand up for women like his mother. 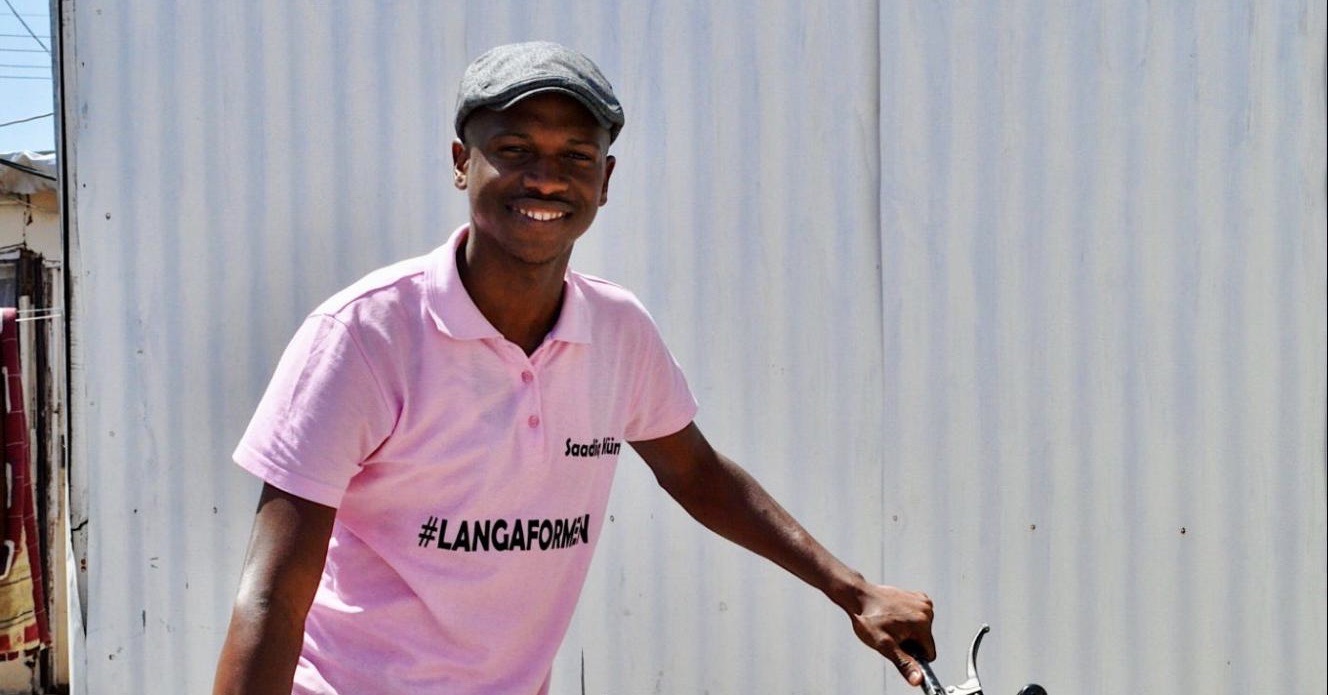 Now at just 22 years old, he and his friend Luyolo Lengisi, who also witnessed violence against women growing up, co-founded #LangaforMen in 2019 to take a stand against gender-based violence by mentoring and educating young boys, supporting and advocating for survivors, and bringing awareness to their communities.

“Since we are the majority of people that are perpetrating violence, we also have to come in numbers to stop that,” Siyabonga said. While there are cases of domestic and intimate partner violence against men and boys, women are overwhelmingly the most targeted, as gender-based violence against women and girls is “a global pandemic that affects 1 in 3 women in their lifetime,” compared to 1 in 5 men, according to a study by the World Health Organization.

“Starting #LangaforMen, we found out that GBV is not only a women’s issue. It’s everyone’s issue,” Siyabonga said. “It’s been many years that we’ve been seeing women fighting gender-based violence, marching, crying, praying, but now it’s time to put men in the forefront [of that fight],” Siyabonga said.

‘What makes a man’

Ten kilometers away in Philippi, the Cesvi Foundation South Africa is also educating men with the hopes of changing society. They hold “What Makes a Man” workshops in Philippi and neighboring communities, some even in busy shebeens to educate boys and men about gender-based violence. They hold sessions online, over WhatsApp, and in-person in English and isiXhosa, starting with boys as young as 10-years-old. “These young boys are going to be the men [of] tomorrow,” Thembani Dyule, project officer at the Cesvi Foundation, said. 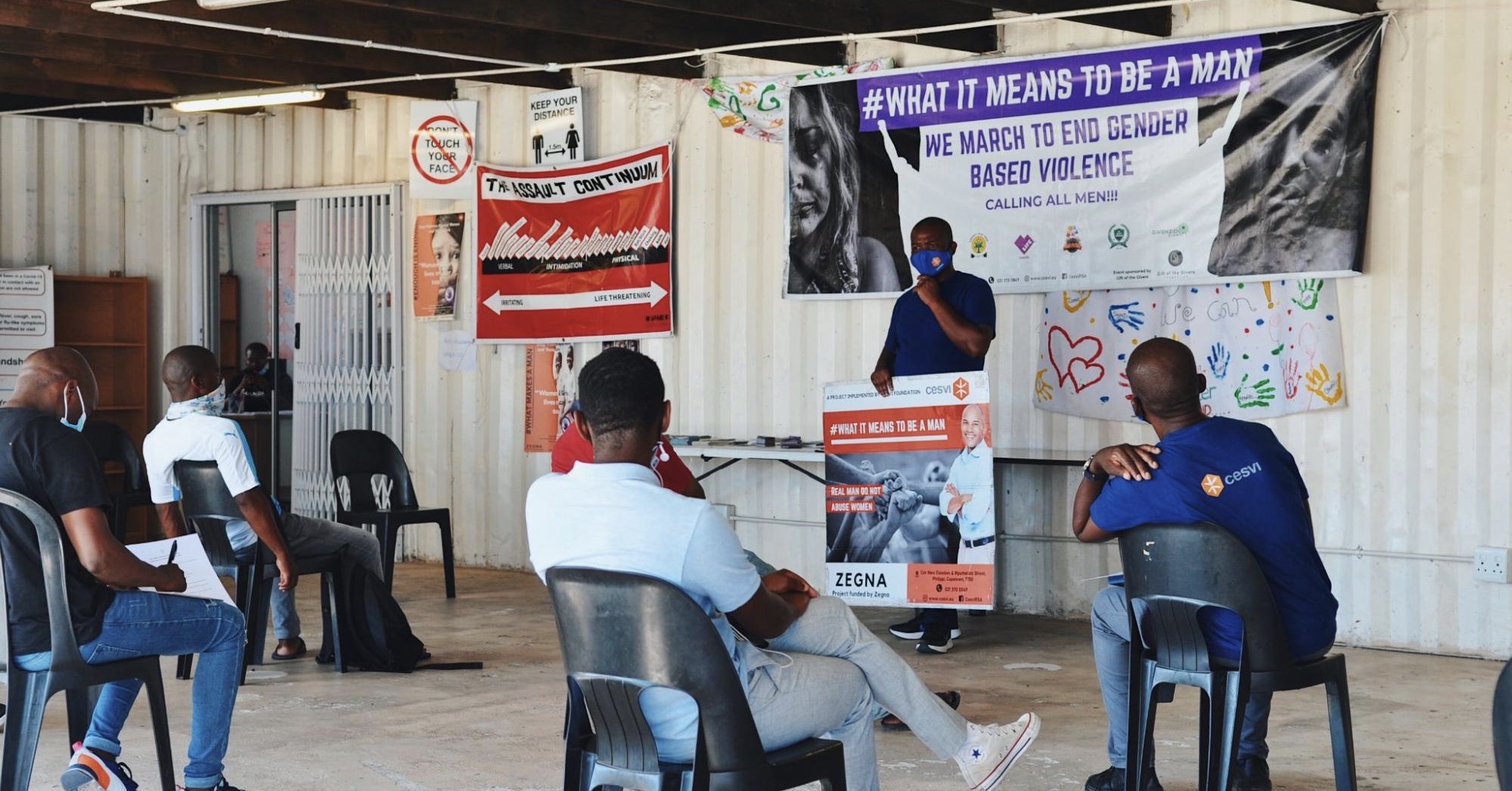 Sheltered from the high noonday sun in a repurposed shipping container, 15 men seated in plastic chairs gather to discuss gender-based violence. Their topics today are gender equality, gender roles, and the influences of cultural and traditional norms. Planes fly overhead from the nearby Cape Town International Airport. Taxi horns and music blare out of open windows on the busy main road. Luvuyo Zahela, standing at the front of the group, holds a poster that reads “Real men do not abuse women.”

The Cesvi Foundation makes sure social distancing is practiced, everyone wears a mask, sanitizes their hands, checks their temperature, and meets in smaller groups of 15 at a time.

Thembani said they started the workshops “to target men and show that men play a role in fighting gender-based violence.” 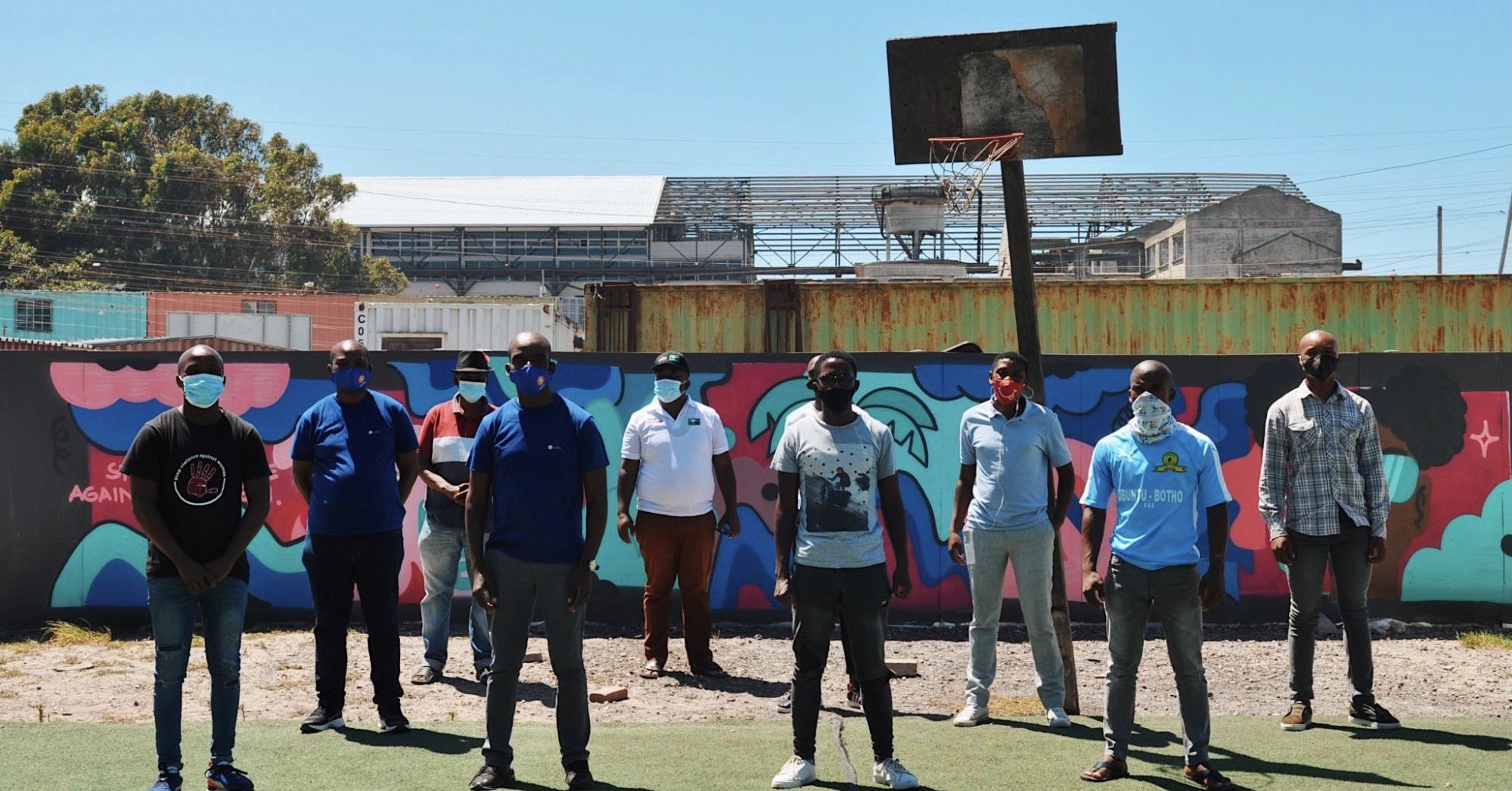 “If you educate a man and you change that man, you actually change the entire community,” Thembani said. “In the heightened intensity of gender-based violence in South Africa, it becomes critical to play a role.” In some studies, between 28% and 37% of South African men surveyed reported having raped a woman. In another study done in Gauteng, 76% of men reported perpetrating gender-based violence at least one point in their lives.

“We go to shebeens where [men] meet, and where they advise each other on how to deal with issues around home and of engaging their wives, and we talk to them in that space, so that by the time they leave there, they have a different understanding,” explained Luvuyo, who is the program manager at the Cesvi Foundation. “‘If the mountains cannot come to Mohamed, then Mohamed must go to the mountains,’” he said, quoting the well-known proverb. 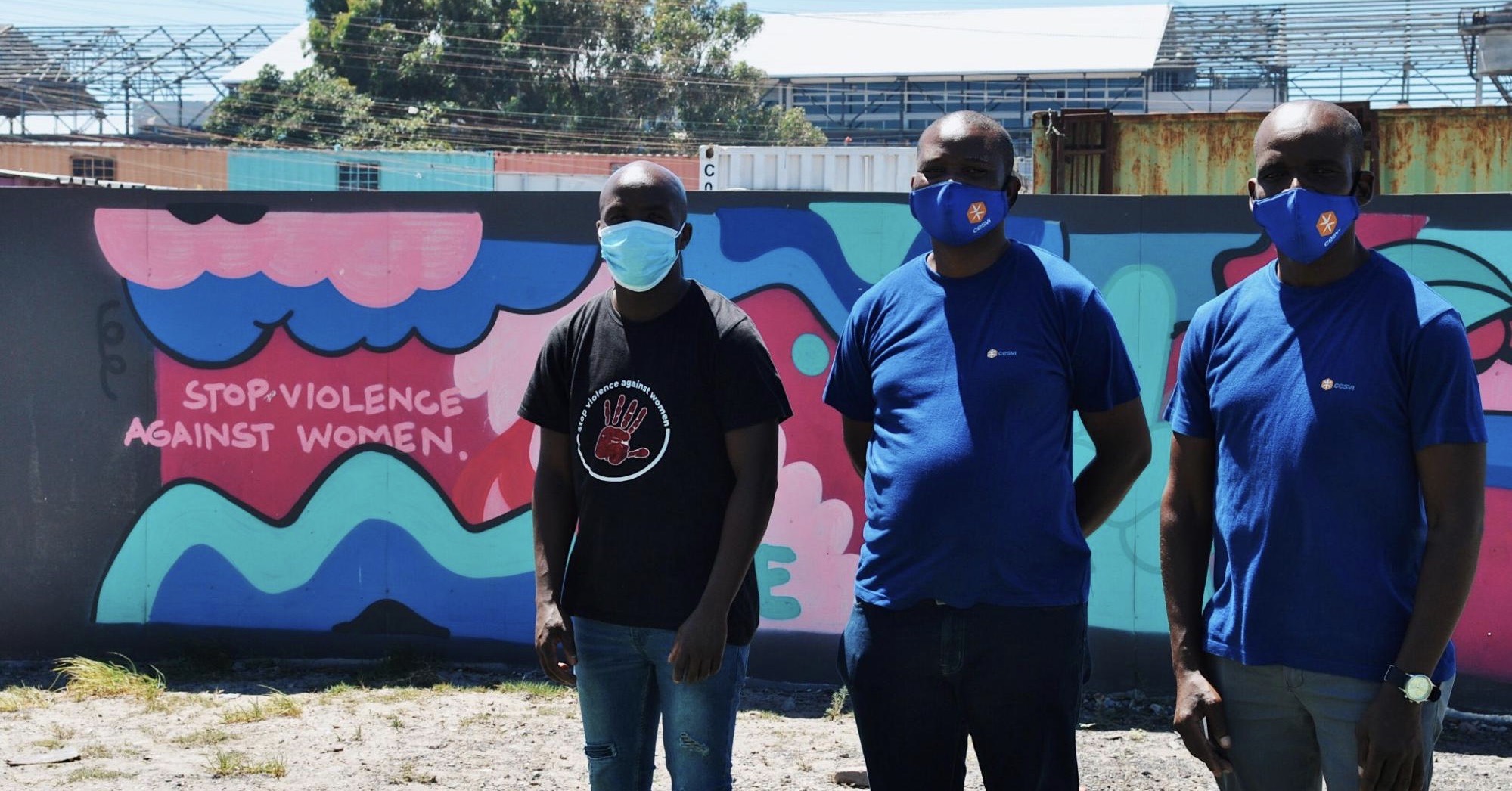 “We cannot see the fight against gender-based violence as a women’s issue. We need to take an active role,” Luvuyo said. He gave examples that men can participate in campaigns, encourage conversations, foster safe spaces, create GBV forums in the workplace, and lead by example in their homes, churches, and schools. “[If we do that], I think we will see a different society,” he said.

At Ntsika yeThemba, Pillars of Hope, a project of The Justice Desk, young boys are being empowered to become defenders of women’s rights, and are learning to demand change in their communities and in each other. Most of the boys come from Nyanga, a township community neighboring Philippi, as well as from Khayelitsha, and Bonteheuwel. With mentorship in an outdoor-based education project, they’re redefining what masculinity means and what actions they should take as men. Their motto is “Pillars of hope, defenders of women, and leaders for an equal society.”

Pierre le Roux, a chairperson of the board of The Justice Desk, said, “South Africa is known as the fatherless nation . . . [When] we ask [the boys], ‘Do you have someone you look up to, a mentor?’ Most of them don’t have an answer. But what’s even more frightening is them saying they do have an answer — someone said his uncle told him if he’s worried about his girlfriend leaving, if he beats her, then she’ll be too scared to leave.” 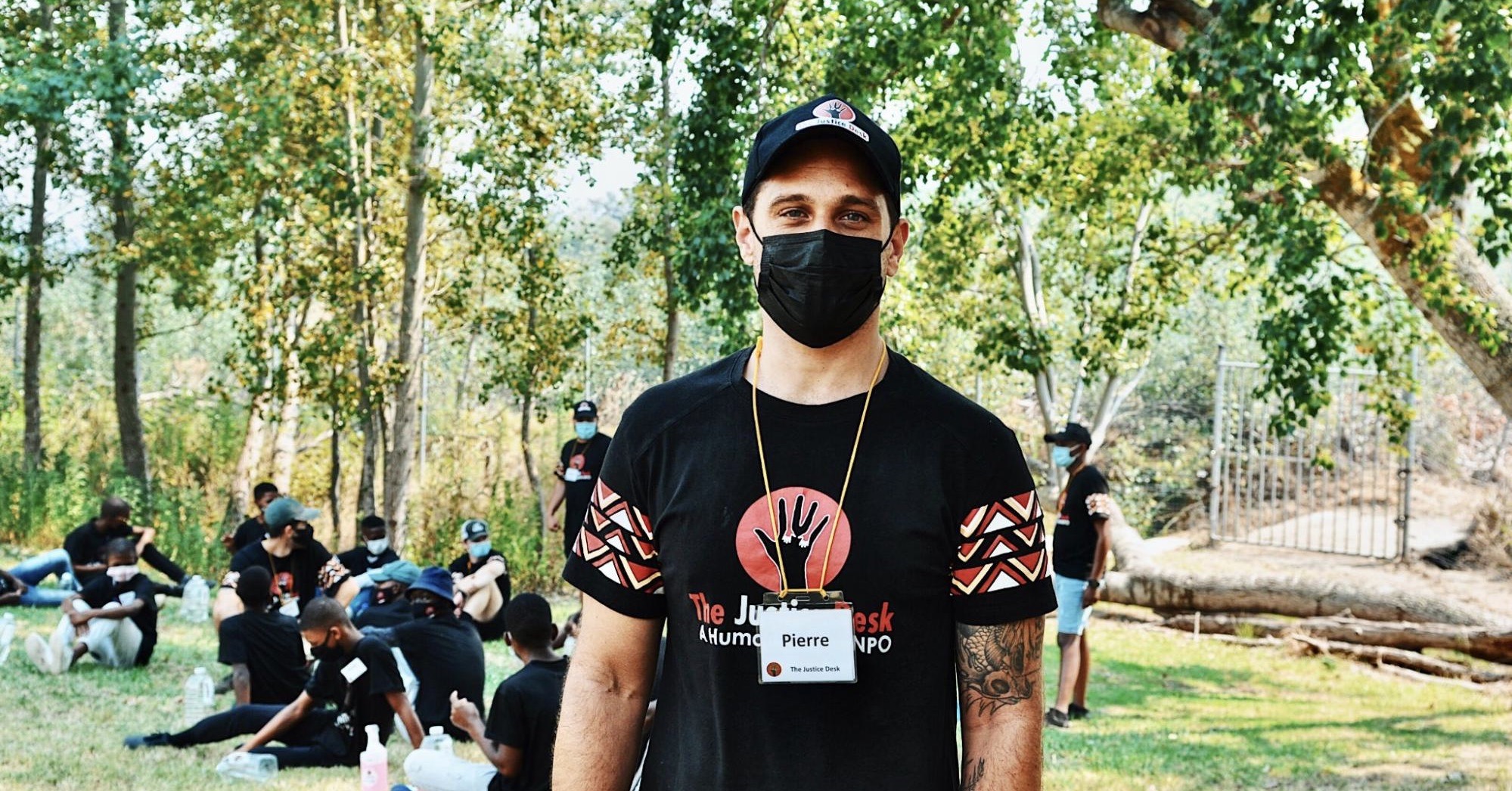 “It’s kind of difficult to make an adult change their mind,” Pierre said. “It’s so vital to teach them when they are kids.” At Ntsika yeThemba, “you can already see the change in their eyes . . . slowly but surely in each session, they start to speak up more, they have more confidence in their answers and in their voice,” and that voice is for defending women’s rights.

“It’s so important for men to step up and step out of that mindset that it’s just something someone else will deal with,” Pierre said. “It doesn’t matter if you’re not the one abusing women, there are people you know who are abusing women, and if you don’t speak up and speak out, those people are going to think it’s okay. … Men need to step up and do their part and be more active and involved.”

“We know the perpetrators but we decide not to report them to the police, or we try to protect them,” Siyabonga of #LangaforMen said.

“No more in the name of men must there be an incident where a woman is killed because of men,” Luvuyo of the Cesvi Foundation said.

“There are a thousand reasons why I’m an activist, why I am fighting for women’s rights, and one of them is that women give birth to us. I’ll treat each and every woman in this country and around the world like my mother,” Siyabonga said. “I’m here on this Earth because of a woman, and if we don’t respect women, we wouldn’t be in this world now.”

“So I urge all men to protect and love women.”