The U2 360° Tour is now well and truly rocking in North America and, as with previous legs, I’ve meet some amazing ONE members along the way. One such person is Mark McCormack who volunteered at the show in Edmonton and kindly wrote about his experience:

Wow. ONE + The U2 360° Tour. What an experience. I’ve never been through something like that before.

Let me start by saying that I am proud of our ONE Team. There is something about working towards ending the worst forms of poverty that pulls sincerely good people together. That kind of energy is what I live for and it was in abundance between the 30 of us in Edmonton. Many of us had never met before, but there was an instant feeling for me that I knew everyone on a deeper level. We knew what we had to do (I didn’t think the coordinators were going to be so clear and informative and entertaining! Special thanks to Maura for getting us all together and feeling as ONE). 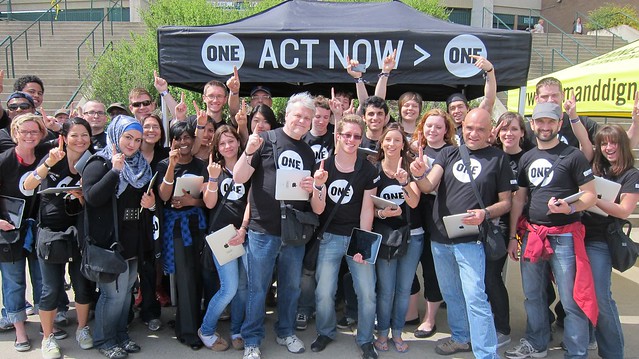 The ONE team in Edmonton

Even the shy ones amongst us gave it their all. At one point there was a little bit of a break as we had engaged most of the people on the grounds. I should have taken that time to relax and eat a little because then it picked up again and didn’t slow down! My ipad skills are perfect now (we signed people up using ipads. Smart. Exactly what I expected from ONE). I informed and signed up 211 people using that baby. Here’s a tip if you want to make that level of impact: make eye contact with the people you are engaging with before you direct their attention to signing up . It creates a genuine connection where you can communicate the importance of the work of ONE.

In one way I wanted to start this blog entry by gushing out all the surprises revealed to us, but I won’t ruin it for you. I’ll give you a hint: I thought we were going to keep signing people up even during the concert (I’m a workaholic)…but we did more than that…

And one volunteer was even waved at by Bono as the band drove by before the show. It’s good to know that people recognize a good ONE volunteer when they see them.