This January, two years away from the expiry of the 2000 Millennium Development Goals (MDGs), the post 2015 agenda has already created a buzz in Monrovia and Johannesburg. As Liberia’s President Ellen Johnson Sirleaf hosts the United Nations High Level Panel on the post-2015 Development framework this week, I was privileged to have joined an energetic group of ONE Africa staff, friends, partners and members at the launch of ONE’s new post-2015 SMS and social media campaign called “You Choose”. The main objective of this campaign is to engage Africans from all walks of life on what the new MDGs should focus on. 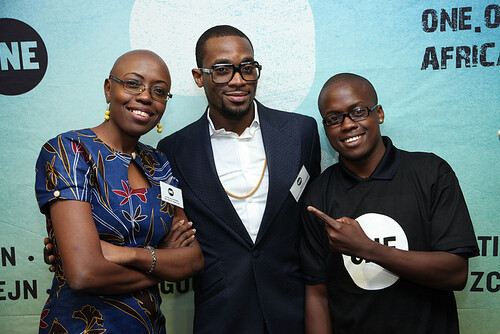 Nachilala, D’banj and a ONE member from Johannesburg

At the launch event Nigerian music star Dbanj told the audience that he joined ONE because he is passionate about engaging on how best to end poverty, he noted that the “YOU CHOOSE” Platforms provide opportunities for all to speak out so that barriers can be removed – or until they find their Jesus Christ! “We can make it, I am an example … Nigerian born, Nigerian made, Africa is more than what people think we are, we have more and have the opportunity to be more,” He said. He called onto the audience and his supporters to participate in this campaign that will influence their futures. 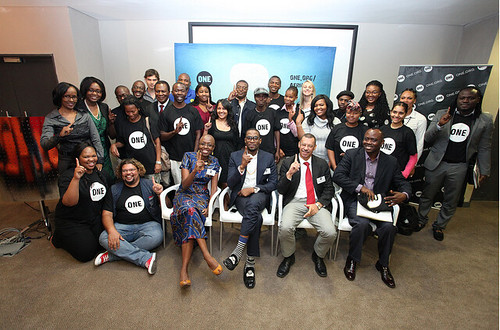 ONE members at the Johannesburg event

As Africa has close to 700 million mobile connections, the “You Choose” campaign will take advantage of this mobile revolution to enable millions of Africans to make themselves heard. Young people on the continent who are 24/7 on social media will be encouraged to add their voices in shaping the new MDGs through “You Choose”.

The campaign has already hit major airwaves in South Africa on SABC TV, SABC SAFM, SABC and Metro. All citizens need to do is submit their priority in a simple format via a free SMS or the web based platforms. Their priorities could be as simple as food, land, jobs, public transport, skills, hospitals, leadership, accountability, corruption or another critical issue. Today, a radio phone in caller named Bongi told other listeners on the SABC
Morning talk radio show in Johannesburg that leadership is critical in ensuring that ensure that the current and future MDGS are met. He cited how former President Kenneth Kaunda of Zambia inherited a country with only a few schools and colleges and no university. But within the first years of independence, he was able to establish a countrywide network of primary and secondary and a university. Bongi chose, and sent a free text to 30677.

What do you choose? To choose, send a text for free to 30677 if you are in South Africa or submit your issue at www.one.org/youchoose if you live elsewhere.

Unlike when the 2000 MDGs were created, the post-2015 MDGs process is seeking advice this time from citizens on what future MDGs should address when the current ones expire in 2015. ONE is working in partnership with 20-plus organisations and influentials that include the UN, civil society organisations, churches groups, radio stations and various media houses in rolling out this drive. ONE is particularly working closely with the UN My World team so as to ensure that the feedback collected through “You Choose “will be included in the meeting of the High Level Panel on the post-2015 agenda to be held in March 2015 in Bali Indonesia.

ONE is thrilled that African icons such as Hugh Masekela, Dbanj, Lira, Benni McCarthy, Chris Katongo, HHP, have joined hands with “You Choose” to urge ordinary African citizens to join the call to action. Launches in Malawi and Zambia will follow on the 12th and 19th of February respectively.

In Zambia, the campaign will be backed by local celebrities that include former Big Brother Housemate, Mampi, singing sensation, Slap Dee and Zambia’s own TV producer Mary Magambo and one of the hip and hottest artists on the Zambian music scene Kachanana. In Malawi the campaign will be backed by Malawian stars Dan Lu, Bon Kalando. You Choose participants will have an option to join ONE so as to have opportunities to join current campaigns ONE is running on improving health and Agriculture investments in Africa. Remember to choose by texting for FREE 30667!