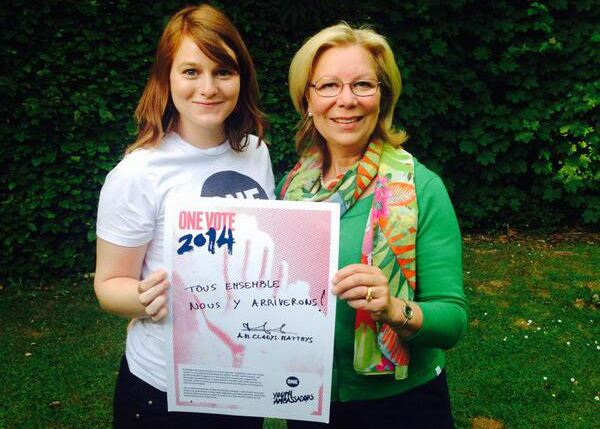 Our guest blogger today is Youth Ambassador Clémence Le Corff from Belgium. Along with 120 others across Europe, she’s been asking candidates in the recent European Elections to sign the ONE VOTE 2014 pledge and make ending extreme poverty a priority if elected.  Clémence tells us what it’s like to lobby the people who represent you.

I didn’t know anything about lobbying before the launch of the ONE Youth Ambassador programme. A few months ago, I thought lobbying was only for big multinationals, to defend economic interests. But with ONE, I’ve learnt that you can lobby for the issues you believe in.

As a young citizen, I care about what is going on in the world and it feels right to do something for people in need. Campaigning and lobbying with ONE is just one way that I can get involved. Being a Youth Ambassador for the ONE VOTE 2014 campaign has been a fantastic way for me to gain more experience of campaigning. I feel more confident and more spontaneous because of it! It’s also a chance for us to show others that, contrary to what it is often said, our generation is concerned and we want our voices heard.

The ONE VOTE 2014 campaign improved my knowledge of development aid policies. I realised how important the European Union was for development in Africa and how important it is that our governments and our decisions-makers make the right choices.

When I first had to contact European Parliament candidates, I was very anxious and stressed. But  I soon realised that politicians are in fact normal people; most of them were happy to talk to their constituents and were really curious about me. 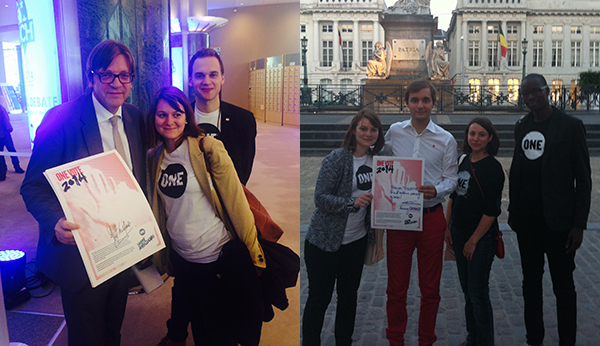 (L-R) Belgian MEP candidate Guy Verhofstadt with Clémence and ONE campaigner Leander, and with another candidate Amaury Caprasse, ONE campaign manager Claire and Youth Ambassador Alioune. Photos: ONE

It also helps when you know what you are talking about – you can have a frank and pertinent conversation. Sometimes you can even change people’s minds! The most difficult task is to raise awareness at events; it is not that easy to make your voice heard and to convince people when you’ve got different perspectives.

I am happy and proud to be a ONE Youth Ambassador. I really think that we’ve got an opportunity to act now and make ending extreme poverty by 2030 a reality.

Join us by signing the ONE VOTE 2014 petition.  The battle is still on!