Laura Webb is a Youth Ambassador from the UK.

I first joined the ONE Campaign Youth Ambassador program in 2019 during my first year of university. Since I have reapplied to the program and had the privilege to continue campaigning with inspirational people from around the world.

I’m about to graduate with an MA in international education and development at the University of Sussex. With a job lined up to teach English in Thailand, I am aware of the sad fact that this will be my last year as a Youth Ambassador. I’ll stay in touch with everyone I met and hope to get involved again when I am back in the UK. But right now is the end of an era that has shaped me, motivated me, and led me to meet some amazing people.

There is so much I could say and many stories I could share, but instead, I’m sharing what I learned. Here are four things that being a part of ONE has taught me. 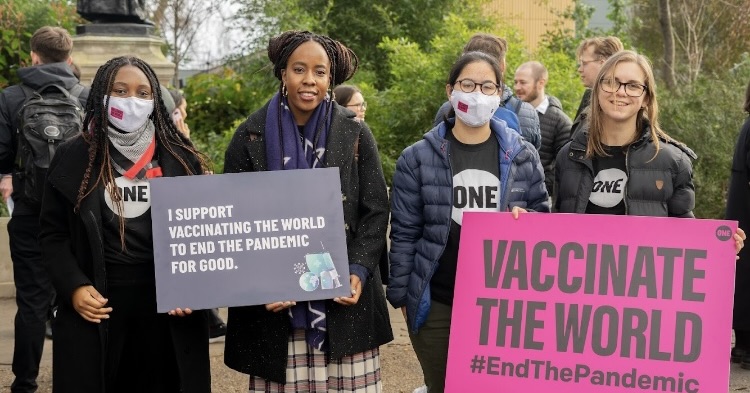 Ignore any political biases or preconceptions

I think that I was slightly naïve when I joined the YA program. Like many of us, I had a binary view of politics. I believed all members of a certain party to be one thing, while others were the opposite. When I met with MPs who had different political views to mine, I had preconceived ideas about what they might believe or what they would say about our campaign.

Early on I realised that assumptions can never be made. I have since met with parliamentarians whose views and policies I personally disagree with, but we are both on the same page about aid or development. We have had productive, interesting, and enjoyable meetings, speaking about things we are both passionate about.

I’ve learned that to tackle any current world issues, such as climate change, poverty, or social injustice, then we must put political party differences aside and work together. If both ‘sides’ of the political spectrum rule out working with half of the population, then we will get nowhere. As I look back over the last four years, some of my favourite conversations have been with politicians who I initially thought I would disagree with.

Say yes to something before doubts come through. You will do it, it will be ok, and next time, it won’t seem as scary.

Say yes before you have time to doubt yourself 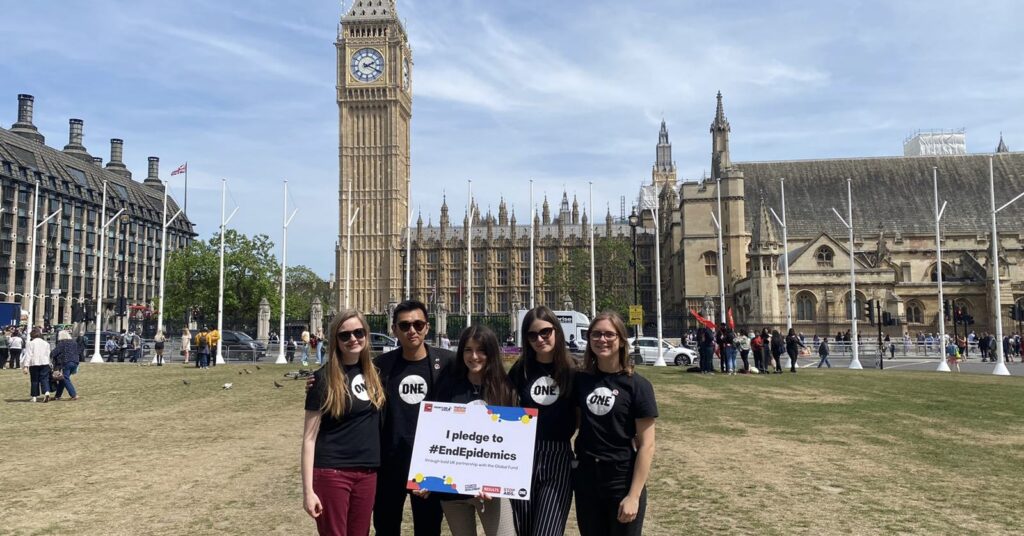 Over the last four years as a YA, I have lobbied MPs, attended global summits, narrated and participated in ONE videos, created viral photos, stood in the street to engage the public, held events at my university, met with former prime ministers, contributed to online campaigns, and much more.

Looking back, I sometimes forget the nerve-wracking feelings I had before each event. Instead, I just remember the impact we had as YAs and the sense of achievement afterward. I have found that the more you put into both the YA program and life in general, the more you get out. I have developed a habit of agreeing to any opportunity the ONE staff presented to me.

In 2019, as I stood up to give a talk to school children about meeting their MP, I was terrified, just as I had been a few months prior when I met with my own MP for the first time. In 2021 I agreed to a project with YAs from across Europe and Africa. My enthusiasm faltered slightly when I realized that I had no language in common with my counterparts in Senegal and Germany. With the help of ONE staff and Google translate, we worked through it. The project turned out well and we all learned a lot in the process.

Each new experience has given me more confidence and has led me fully discover what I am capable of. With the help of ONE staff and fellow YAs, I have learned to suppress the small voice in my head telling me it’s scary or that I can’t do it. Over the years, I have gained so many skills through the opportunities given to me.

My advice to new YAs would be just to agree. Say yes to something before doubts come through. You will do it, it will be ok, and next time, it won’t seem as scary.

Little actions have a big impact

Often when I tell people about my experiences as a YA, I mention the global summits or events in parliament. Attending lobby days and the list of parliamentarians we have met with sounds impressive, but I have come to learn that often it has been the ‘smaller’ actions that have stayed with me the most and have had the biggest impact.

In 2019 with a fellow YA at my university, we spent a day on campus and around Brighton speaking to people about the Global Fund. Almost no one we spoke to had heard of the Global Fund or was aware that it was up for replenishment. We collected hundreds of signatures for our petition, but more importantly, laid the foundation for a new group of people who learned about ONE and the Global Fund and were keen to sign more petitions. Imagine the impact of even just half of them emailing their MP or sharing future campaigns on social media.

I’ve learned that every share on social media or every new person I talk to about ONE’s work could mean a new person being inspired, learning more, and taking action in their own way. 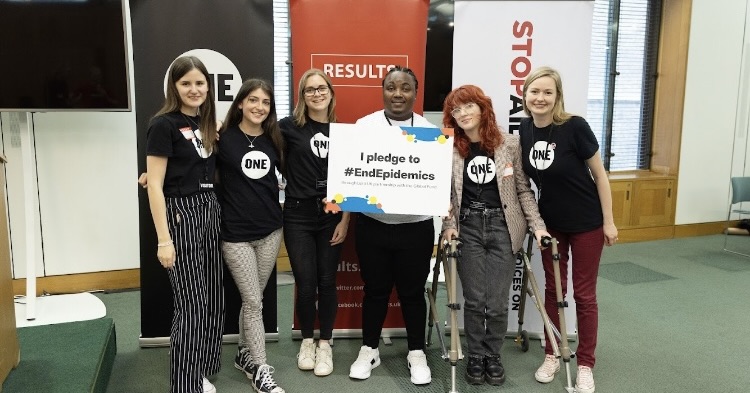 In response to the inequitable distribution of COVID-19 vaccines, a group of us created an image for social media with our message, “None of us are safe, until all of us are safe.” What started as a small action to raise awareness and morale ended up with 20,000 views on Twitter! I’ve learned that every share on social media or every new person I talk to about ONE’s work could mean a new person being inspired, learning more, and taking action in their own way.

Surround yourself with people who make you a better person

While I am incredibly passionate about the causes ONE advocates for, one of the main reasons I have reapplied to the Youth Ambassador program every year is because of the people I have met. Every time I have attended a lobby day or an event with ONE, I have come away feeling motivated, inspired to take action, and wanting to learn more about the issues facing our world.

Hearing about what other Youth Ambassadors are doing is incredible, and the supportive network which we have built up has helped me throughout my time at university. Despite seeing each other only a couple of times a year, I have amazing memories with the friends I’ve made at ONE. I am excited to see what everyone achieves in the coming years. 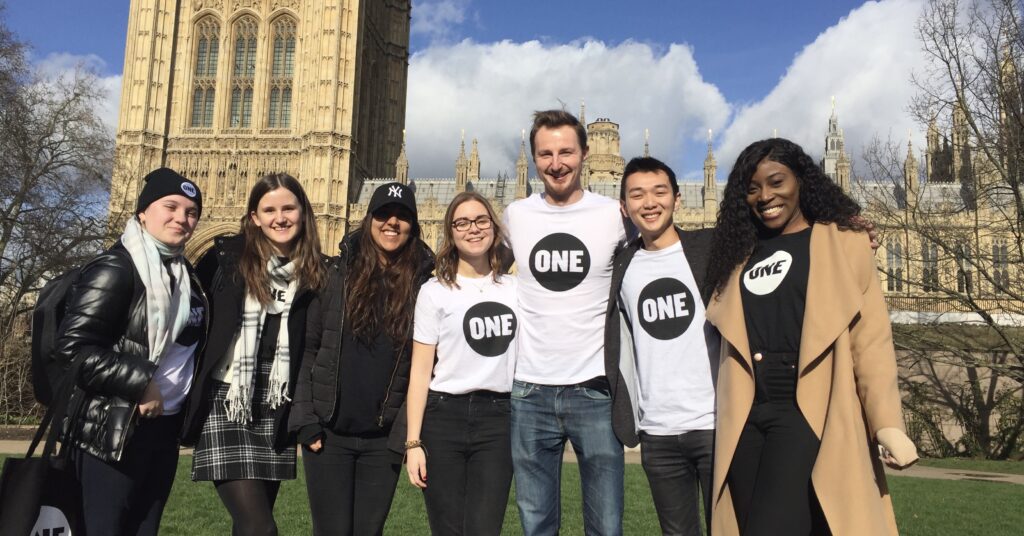 A group of us regularly FaceTimed during lockdown, and between us we were living in England, Scotland, South Korea, Italy, and France! The ONE staff have also inspired me, improved my confidence, and have given me valuable advice.

So that just leaves me to say thank you, to all the YAs, ONE staff, and people I have met since being a ONE Youth Ambassador — you have taught me so much!

Feeling inspired? Apply to become a Youth Ambassador at ONE! Find out how you can join ONE!

Laura Webb, ONE Youth Ambassador from the UK.