Two young men in Langa are taking a stand against gender-based violence by mentoring and educating young boys.

“We need to educate men about gender-based violence and gender equality, so women and young girls can be free,” explain the two co-founders of #LangaforMen, Siyabonga Khusela and Luyolo Lengisi.

Siyabonga and Luyolo are young, just 21 and 22. They started #LangaforMen in response to the violence against women they witnessed as young boys.

“We couldn’t sit back,” Siyabonga said, “We know our mission and vision. We want to end gender-based violence.”

“We want to fight those things so our sisters and mothers can be free, whenever they’re going to work, school, at home.”

When women told them “We can’t be telling girls not to wear short things, to walk fast at night. They should be free. They need to be themselves,” Luyolo said he and Siyabonga realized, “We need to educate men about gender-based violence and gender equality.” Siyabonga added, “As men, we need to heal first before we can go out and heal others. We are healing men, so we can go outside and heal everyone.”

They also advocate for survivors at police stations, speak in high school classrooms to de-stigmatize menstrual health and hygiene, hold meditation and poetry sessions, and raise awareness on social media. 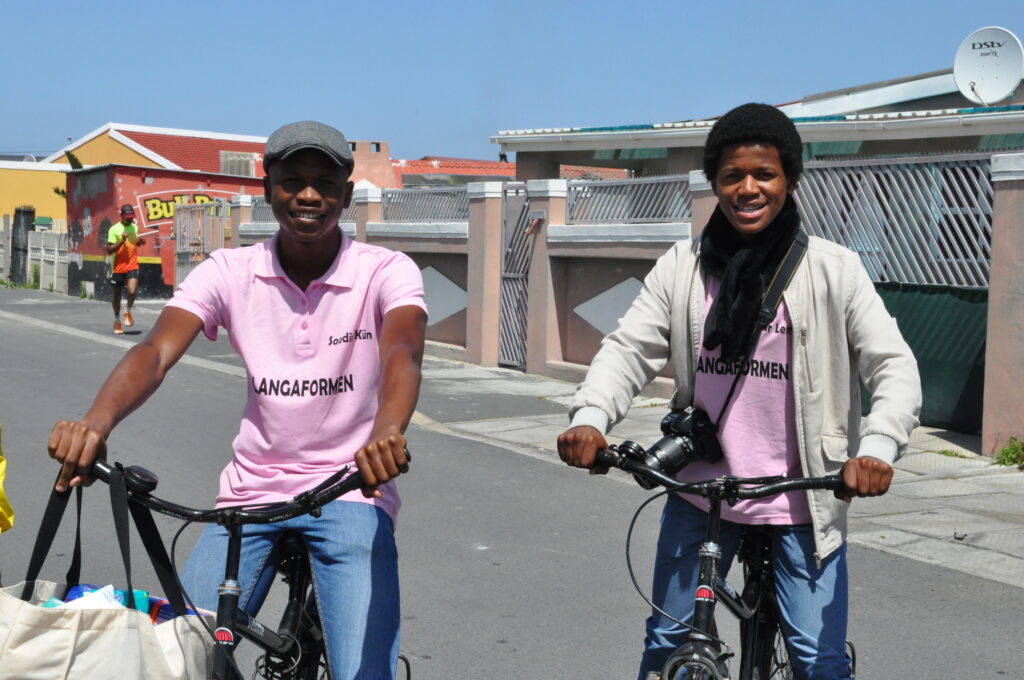 Last year, they held their first men’s march in response to the death of Uyinene Mrwetyana, which sparked outrage across South Africa. Uyinene was a 19 year-old university student who was raped and murdered by a post office worker in August 2019 as she tried to collect a package. Enraged South Africans held protests, vigils, and marches, igniting the Am I Next? movement.

Siyabonga and Luyolo rode up on bicycles past the Guga S’thebe Arts and Cultural Center across the street from the Johnson Ngwevela Hall. Before COVID-19, #LangaforMen held rallies here, raising awareness for gender-based violence with video testimonies of survivors. Now, the building sits empty due to lockdowns.

But their work has not stopped. It’s now more important than ever. According to Police Minister Bheki Cele, just one week after South Africa entered into lockdown, more than 87,000 cases of gender-based violence were reported across the country.

Just one week after South Africa entered into lockdown, more than 87,000 cases of gender-based violence were reported.

This year on June 16, one of South Africa’s favorite rugby players, captain of the national team, and co-founder of the Kolisi Foundation, Siya Kolisi, joined them in a march to Parliament. Cardboard signs in bold marker read “real men don’t rape!”

Isolation at home, loss of income, and decreased access to health and safety resources can all increase the risk of violence against women.

In 2018, 2,700 women and 1,000 children were murdered by men across South Africa, and at least 100 cases of rape were reported daily. Over the past decade, the country has seen an increase in the numbers of murders and sexual offences including rape, which rose 4.6% from 2018 to 2019. The UN predicts that during a three-month lockdown, the number of “intimate partner violence” incidents increases by 20%.

Their hope for the future

For Siyabonga and Luyolo, these statistics are deeply personal. As children, they witnessed the abuse of their own mothers.

“We want to fight those things so our sisters and mothers can be free, whenever they’re going to work, school, at home,” Luyolo said.

Each week, Siyabongo and Luyolo host six to seven boys for healing sessions in Siyabonga’s home with the hope that they’ll spread the message to end gender-based violence to other boys.

Luyulo, who has taught poetry and drama since 2015, invites poets to recite healing poems. “These stories should be told, not be hidden” Luyolo said, “It also teaches them to play around with their voices and challenge the system.” Luyolo hopes that by teaching the boys about writing as a way of healing, they can release anger and heal from trauma.

At their first session, the men’s acapella group from Khayelitsha, African Soul, came to sing, and Siyabongo and Luyolo taught the boys about toxic masculinity, patriarchy, and gender equality.

“One of the things we try to tell them is that it is okay for a guy to cry.”

“One of the things we try to tell them is that it is okay for a guy to cry,” Siyabongo said, “Because we are taught by our society that a man does not cry, and if you want to be heard, you must lay a hand on a woman, you must hit someone. These are the things we want to unlearn and try to teach them.”

On the verdant hillside of Table Mountain, Siyabongo and Luyolo led a group of thirty boys for a healing session, teaching them to respect all living things and to hunger for a world, where “women are free.”

“In the 1980s, there were many campaigns for freeing South Africa,” Luyolo said, “We want that to happen again, where the world has an international lockdown for femicide because not only are women in South Africa abused, it’s happening all around the world.”

Standing next to them, you get the feeling that you are witnessing South Africa’s new history — the next generation led by change leaders like Siyabonga and Luyolo to rebuild a country where women and girls can be free.