This story was originally reported by Caroline Wambui and edited by Laurie Goering for the Thomson Reuters Foundation.

In this arid stretch of Kajiado County, Kenya where worsening heat and drought have been tough on livestock farmers, Arnold Ole Kapurua is experimenting with a hot new crop: chillies.

Ole Kapurua, 29, a farmer and agronomist, now grows two acres of the fiery pods – and is training other farmers to do the same – as a way to protect their incomes in the face of harsher weather linked to climate change.

“With time we realised that we weren’t making good money as our livestock income stagnated,” he said. “During drought we lost our herds to hunger and diseases while during the rainy season we lost some to floods making us live on a lean budget.”

But after a bit of research, “I realised that chillies had climate friendly features,” he said. 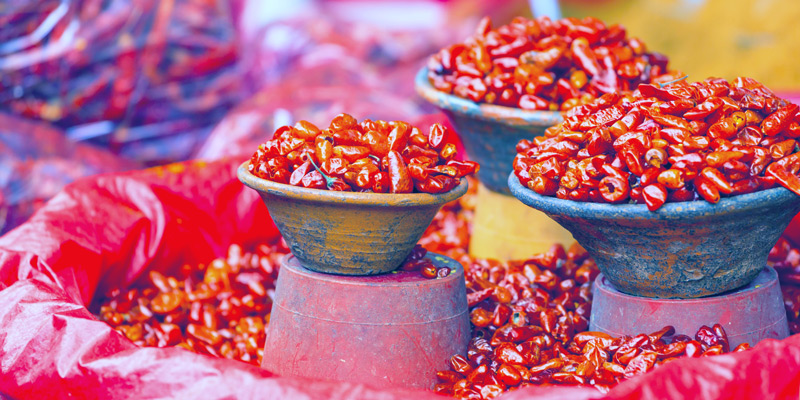 Chilli can provide a workable alternative for herders dealing with drought.

While some farmers still rely entirely on livestock in the region, a growing number are now concentrating their energy on farming chilli, which can be grown with limited amounts of water, said Samuel Ole Kangangi’r, another new chilli farmer.

Over the last five years, more than 100 farmers in the region have begun growing chilli, most after trying other crops, including maize and beans, that didn’t cope as well with drought and brought in little money, the farmers said.

Well-managed chilli farms can produce an ongoing harvest over six months, with an acre of land producing up to two tones of peppers a week, Ole Kapurua said.

“That cannot be compared to livestock rearing as one cannot afford to be selling a cow every week thus making chilli farming a better option,” said the farmer.

Solomon Simingor another farmer in Kajiado County, said a farmer with at least two acres of land can earn as much as three times more with chilli than with cattle, in his experience.

To provide enough water to keep their plants irrigated, farmers in the region are turning to building small dams to catch water in the rainy season.

Mulch around the plants – usually grass or plastic – also helps hold onto limited water and keep down weeds.

Kenyan farmers have been growing and exporting chillies to Britain, Germany, Norway and France for about 10 years. Chilli is also sold in local markets and supplied to supermarkets.

Paul Rangenga a chilli farming expert who has been advising farmers on taking up the crop and who runs a produce company, said he believes chilli can provide a workable alternative for herders dealing with worsening drought stress.

“Chilli farming is a long-term form of investment and the risks involved are minimal as the crops are drought resistant and well adapted to arid regions,” he said.