Over the last couple of weeks, you might have noticed the large and exciting sporting event taking place in the UK. Athletes from all over the world have come together to compete in a spirit of peace and solidarity in the games.

With the world’s eyes on London, we have a unique opportunity to call on British Prime Minister David Cameron to launch the race against hunger.

Without nutritious food, athletes couldn’t compete at the games. But many of the world’s poorest children simply don’t get the nutrients they need to grow and develop, and won’t have the chance to fulfill their potential.

To coincide with the campaign, we’ve launched a new online game where you can compete with your friends and world leaders (and sign our petition as well). 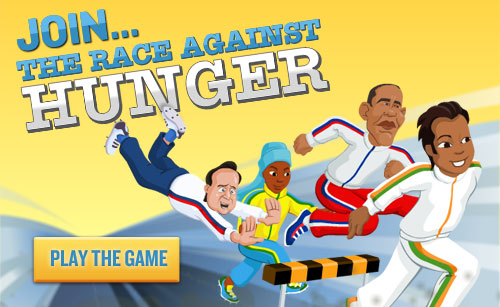 David Cameron has announced that he will hold an event on hunger and nutrition during the Olympics, and this could be a real chance for him to take a stand.

We need to call on him to seize this opportunity and announce a commitment to save millions of children from stunting by the time of the next Olympic Games in 2016 – giving them a real chance to thrive.

And we need your help to spread the word – please play the game, email it to your friends, and share it online.

Let’s make this moment talked about for another great reason – let’s go for gold in the race against hunger.