Saira O’Mallie is on the road with U2 as part of #ONEonTour and will be sending updates from our wonderful volunteers who are helping to sign up new members in the fight against extreme poverty! 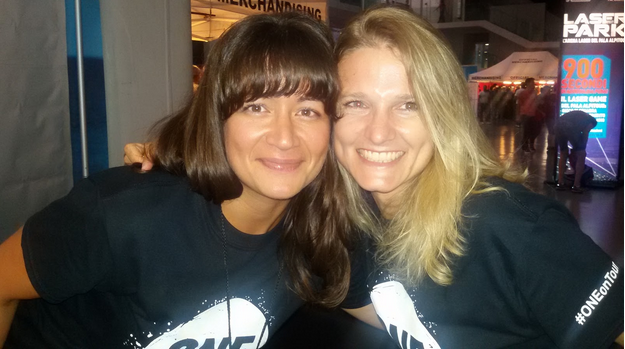 It has been fantastic to have so many returning volunteers on the tour. Silvia (pictured above) joined us for the second time in Turin, and came along having recruited almost 100 new members in advance! On the last tour Silvia signed up so many new supporters that she was invited to join the band on stage. After a great night I received this message from Silvia and wanted to share it with you:

Alone I am nothing, but together as ONE our voices become a choir that delivers the great ritornello: Stop the extreme poverty in the world!

Also in Turin, two of our volunteers signed up Italian super DJ Linus!

I hope he was excited to receive a welcome email from the band to say that he’s using his voice right now to spread word of the #GlobalGoals and help fight extreme poverty!

So far we’ve had three birthdays on the tour. Here you can see the team singing happy birthday to volunteer Angela in Turin. Our own Emily Wigens celebrated in style in Stockholm and Daniel also joined us on his special day in Stockholm.

Angela and Daniel told me that volunteering for ONE at the U2 show was the only way they wanted to celebrate – lucky for me!

Join ONE right now, and become part of a global movement of nearly 7 million people fighting against extreme poverty. What are you waiting for?!