For this year’s International Women’s Day, we focused on the need to accelerate progress towards global gender equality. It’s going to take almost 100 years to achieve gender equality for all women everywhere. This is unacceptable. Progress is far too slow. We require new and radical solutions, and to think the unthinkable in order to get there faster. None of us are equal until all of us are equal. 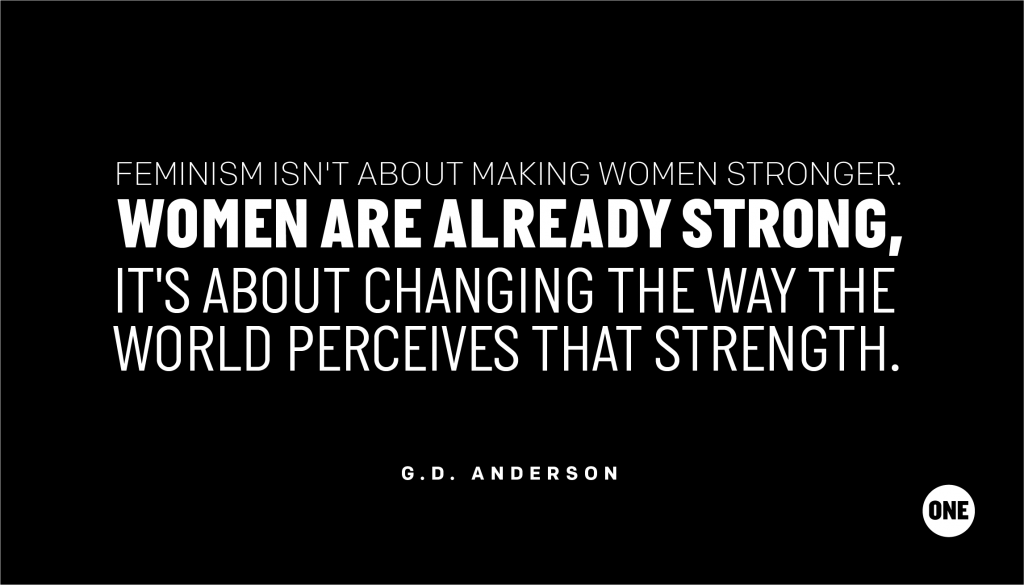 Ahead of IWD, our CEO Gayle Smith was in London to take part in ‘Women in Dev’, a women-led, women-focused international development conference. She gave the opening address and also stressed the importance of feminist leadership in a panel debate.

.@GayleSmith talking about the fight to end AIDS: “There’s a very different impact when I start getting out of the way and the person talking about the impact in Africa is an African woman.” #WomeninDev @WomenDev pic.twitter.com/FknbtkIRIs

Interested in finding out more about the conference? Check out this interview that Gayle did with Women in Dev founder Rachel Firth. Gayle also attended a ‘Thinking the Unthinkable’ talk with activist Nimco Ali, Mandu Reid, leader of the UK Women’s Equality Party, and Ann Cairns, executive vice chairman of Mastercard and chair of the 30% club. The event discussed solutions to the problem of gender inequality,

“How do you get power to change? Try to persuade them, hold them accountable, and fight them with facts!” – Gayle Smith.

Revisiting Yours in Power

We also took the opportunity to catch up with the three formidable women’s rights activists and stars of our 2019 short film series Yours In Power. We asked them how the films had impacted their lives and work:

‘Yours In Power provided me with a platform to influence, advocate, and inspire women all over the world.’ – Melene Rossouw

‘Yours in Power has had a huge impact on my work. By portraying my story and journey, the video helped extend my audience, helped thousands of people understand and advocate for gender and health issues.’ – Dr Joannie Marlene Bewa

‘I began to receive countless messages … from people I know and don’t know; telling me how inspired and empowered they were after watching the film. … I want every young girl and woman out there to know that in the end, they will actually fly’ – Wadi Ben-Hirki

How we helped to change Senegal’s sexual assault laws

Since June last year, ONE and our partners have been campaigning for Senegal to improve its sexual assault laws to protect women and girls from gender-based violence. The collective efforts of our partners, volunteers, and supporters led to a new law that increases the level of punishment of people convicted of rape. We broke down the steps that we took in this Twitter thread:

Since June last year, ONE and our partners have been calling for the sexual assault laws in #Senegal 🇸🇳 to be improved in order to protect women and girls from gender-based violence. #IWD2020 #GenderBasedViolence https://t.co/bZqIBIX1CH

We also shone a light on the importance of the HPV vaccine for women, a key part of Gavi, the Vaccine Alliance’s work.

We covered the release of the new Equal Measures 2030 report, which found that 2.1 billion girls and women live in countries that won’t achieve gender equality targets by 2030 at the current pace.

There is no time left for business as usual: #genderequality can be achieved for billions of girls and women by 2030, but it needs everyone to move faster. See our new report. #IWD2020 #Raceto2030 https://t.co/LJJ0hdXbTF pic.twitter.com/d6vFulnUiV

Our Policy team explored whether more global funding for gender equality is really all it seems, and created a dashboard in case you want a data deep dive. And, we shared 12 stories from 12 inspirational women who have changed the world.