That’s what Elvin wants the IKhaya Le Langa ambassadors to feel here — at home, to experience the feeling of being held and believed in by themselves and others, and that their dreams matter.

“[All of] that started with my mum going, ‘You’re amazing. You’re loved, and you can be anything you want,’” Elvin said. “That’s what this place is.”

IKhaya Le Langa, a not-for-profit company, is a place for the young men of Langa to find mentorship, incubation for their ideas, and begin healing trauma with an on-site clinical social worker. “I can’t heal their trauma and I can’t cure the environments they come from,” Elvin said. “But the time they’re here and that they arrive, there’s hope, there’s food, and there’s companionship.” 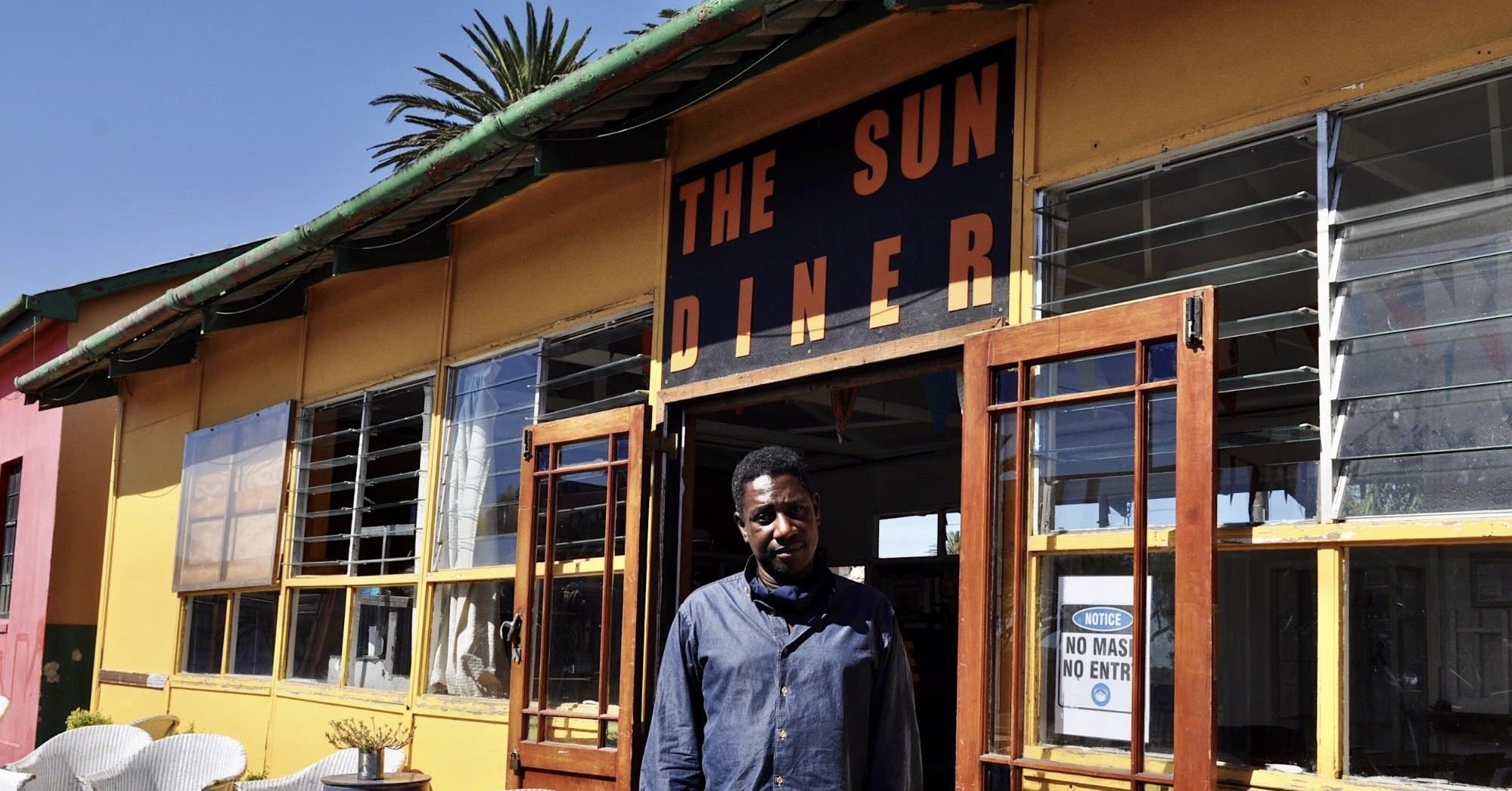 Little room for opportunity in Langa

British-born Elvin first visited South Africa in 2004 and moved to Langa 10 years ago. In Langa, he was struck by the number of talented young men with dreams unfulfilled, standing at street corners and idling at taxi ranks. “The ability to sing, dance, make this, create that, is insanely high [in Langa],” Elvin said. “[So] what’s going on in the township?”

The unemployment rate for young people in the country is a staggering 59%, and according to the ONE Africa COVID-19 Tracker, 18.7% of the population lives in extreme poverty. The last census recorded only 40.1% of Langa residents had completed high school.

Struck by what he saw and what creativity he knows is coursing through Langa, Elvin asks, “Why [isn’t] this amazing place able to sustain and create hundreds of thousands of jobs as it should do [being] in the middle of the geographic center of one of the richest cities on the African continent?”

Elvin explains that the older men of Langa are still waiting for their time to come. There’s an unspoken agreement that young men like Asekho and Sifiso, ambassadors at IKhaya Le Langa, must stand at the back of the line and wait their turn for opportunity and growth. 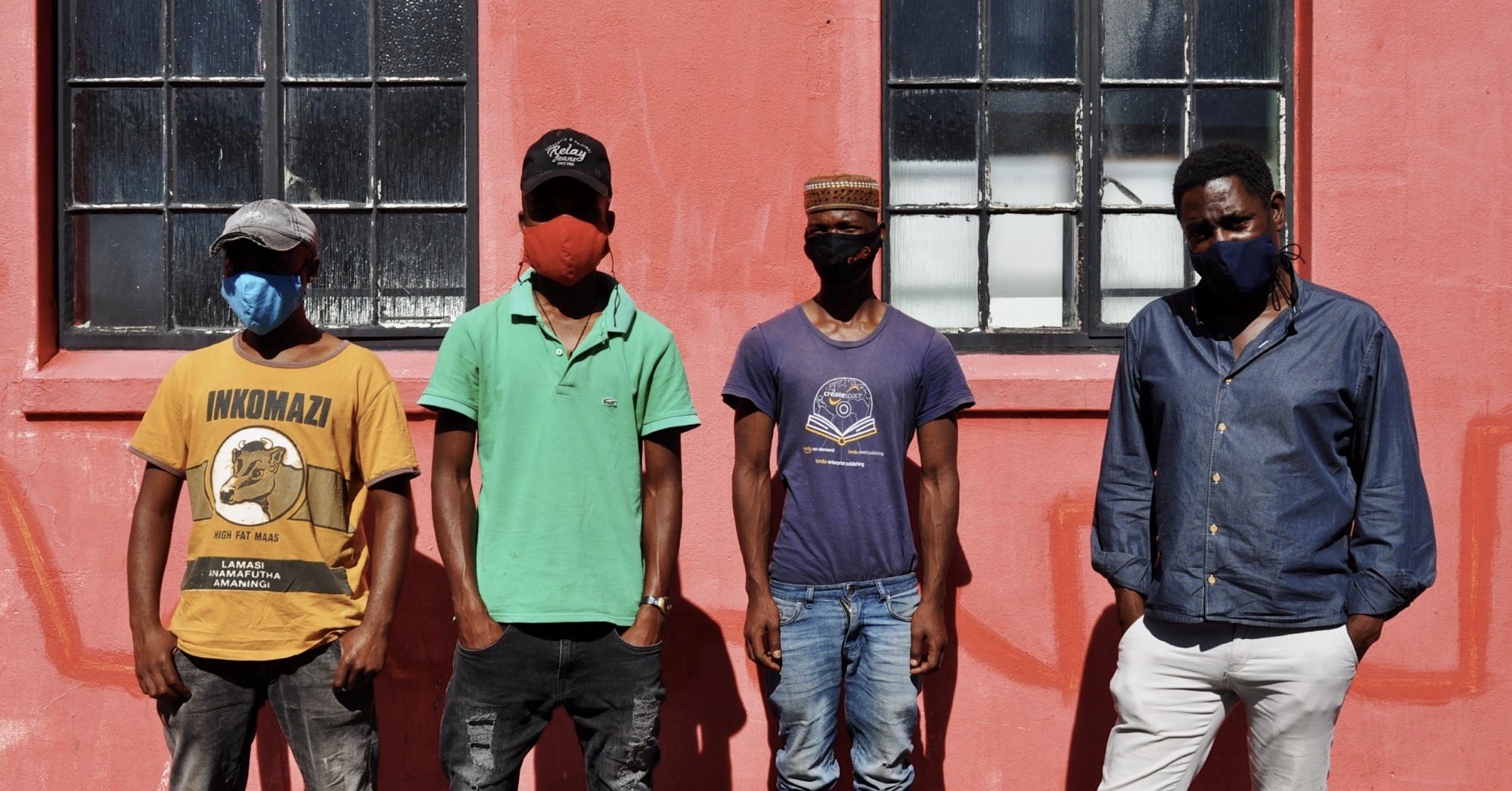 “The dysfunction of Langa provides these guys with very little opportunity, and this is one of the outcomes,” Elvin said.

Elvin cites other issues like elite capture, institutional and systemic racism, lack of positive male role models, gang culture, drug influences, and generational trauma and abuse that impact the number of opportunities available to young men in Langa. “Elite capture happens in all communities, all societies, but in poorer communities, the effects of elite capture are really quite pronounced. Elite capture is where resources for a community are snaffled by the top layer,” Elvin explained.

“It is the memory of the little black boy in me that gets it. I see them,” Elvin said, “That feeling of being so inconsequential—I had that feeling my whole life,” Elvin said. “Here we are in South Africa where you had legislated racism. It’s important that they understand that blackness is a good thing. They’ve been told for a long time in this country, in particular, that it’s not.”

“They call it ‘swart gevaar,’ black fear, it was political brainwashing under the apartheid era, and it sticks that if you see blackness, you see fear or less than. So for us, it’s a deliberate strategy by saying ‘This is a sustainable black space.’” Elvin started calling the area “Langa Quarter” to detach the stigma of the word “township.” “We’ve created the first social enterprise precinct in South Africa, [Langa Quarter],” Elvin said, where the idea is to overlay the social enterprise principles of “people, planet, and profit” onto whole neighborhoods, and create some form of social enterprise in each of Langa Quarter’s 500 homes. “The Langa Quarter is a prototype ‘Social Enterprise Precinct’ (SEP) a community development model in which ‘people, planet, profit principles are integrated throughout our activities and decision-making processes,” Elvin explained. 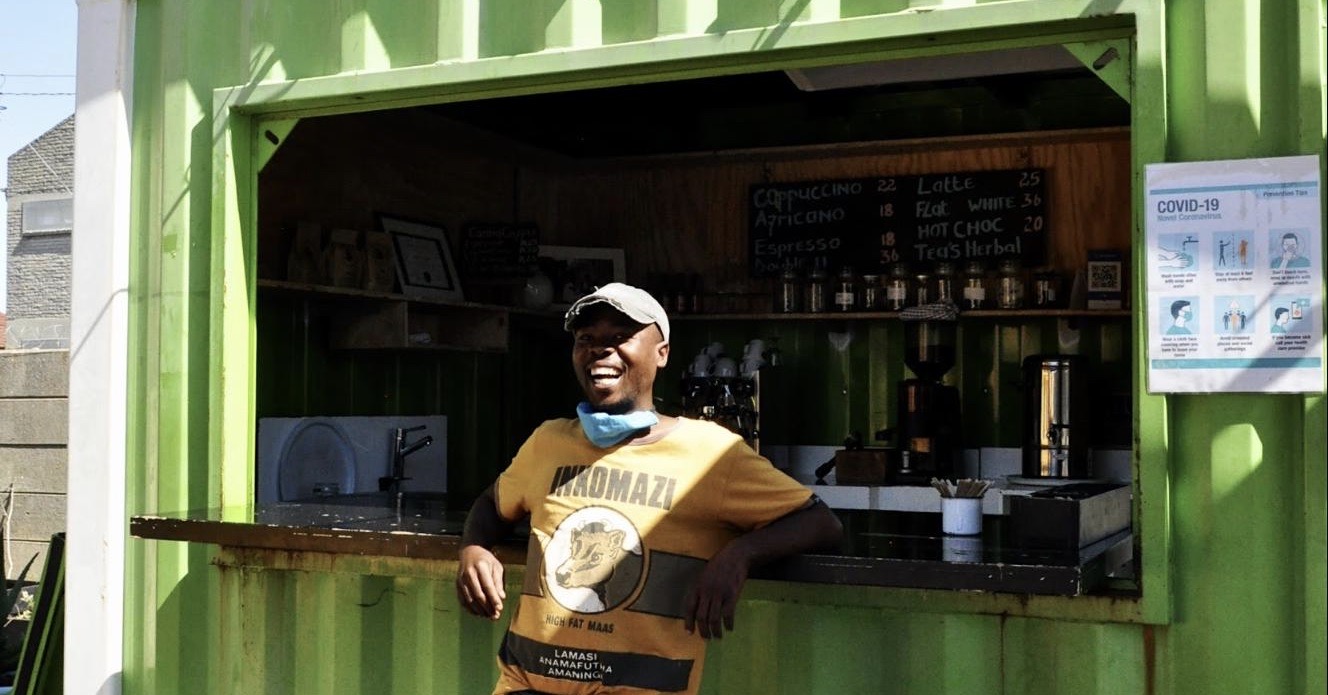 “There is an extraordinary amount of talent here,” Elvin said. “But what happens when that promise is not fulfilled? You turn in on yourself. ”

IKhaya Le Langa seems more than just a wall away from the restless energy outside. From when you enter the gate, ambassadors’ smiles are wide, bright, and hopeful. They move about IKhaya Le Langa with calmness and determination, purpose and drive, bridled, focused energy.

One of the ambassadors, 18-year-old Sifiso, said his three years as an ambassador changed him; he now wants to be a tour guide. “One thing we did through this pandemic was the lockdown lunches for homeless people who live around the community,” Sifiso said. “It was amazing.” Through IKhaya Le Langa’s “Lockdown Lunch Club,” the organization was able to feed 50 people a day. 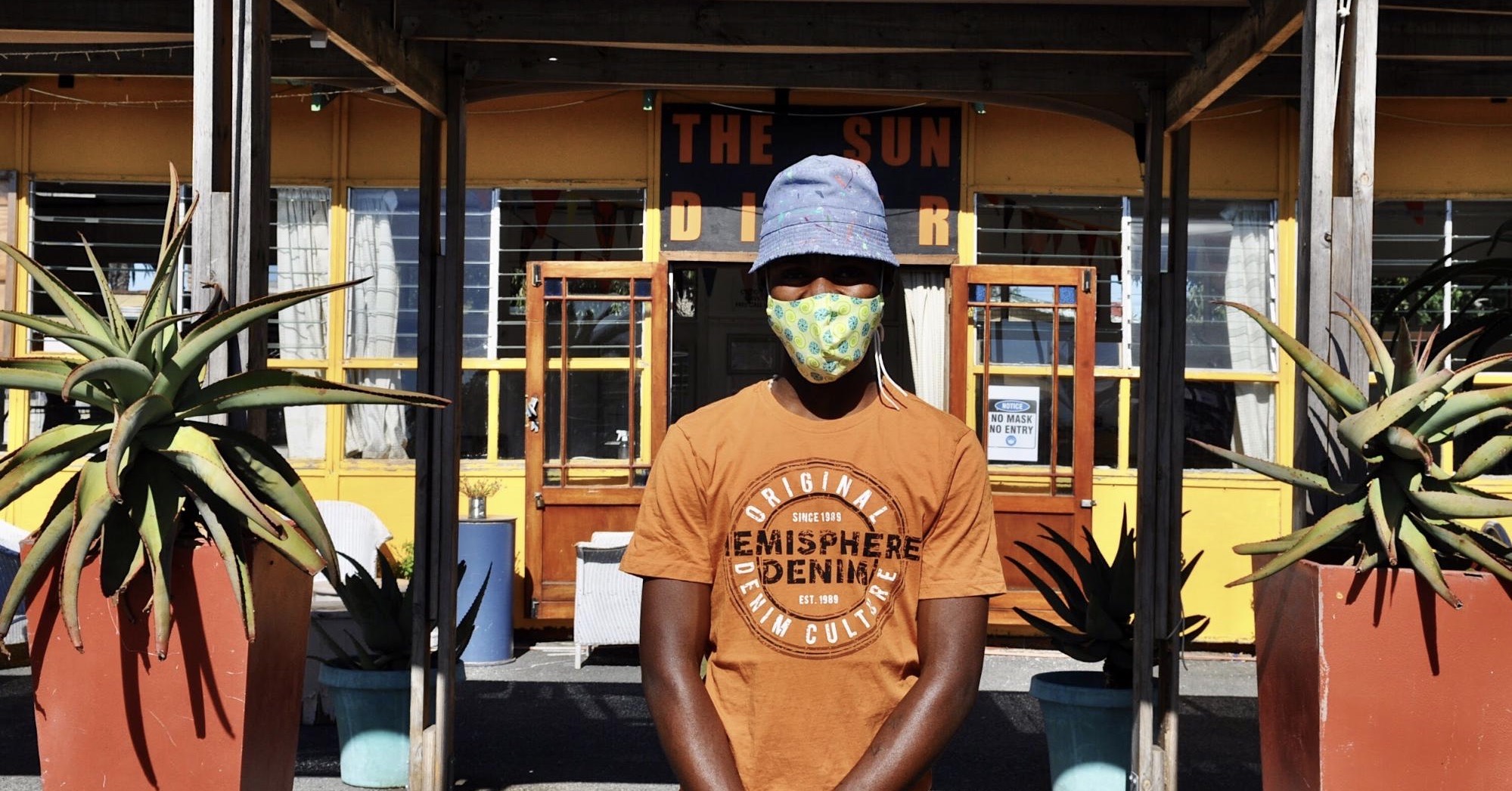 Sifiso and the other young men at IKhaya Le Langa are encouraged to come up with their own business ideas and use the space to make their dreams happen. One is an artist, and another produces music, but they all learn life skills and disciplines around communication, behavior, timekeeping, and a general understanding of themselves, space, others, and relationships. “The way our process works [is focusing on] volunteering, personal development, and economic activity,” Elvin said.

It’s a model Elvin hopes will be replicated in South Africa’s 73 townships and around the world. His plan is to open InSTED, the Institute for Sustainable Township Enterprise Development, to teach what he’s learned during his 10 years in Langa.

“We’re the first township in South Africa. We’re going to be 100 years old soon,” Elvin said. “The other 73 townships [make up]11.6 million people, [that’s] a quarter of the population of the country. I like the fact that there’s going to be lots of youngsters like these guys seeing what we’re doing here and see the community driving change.” 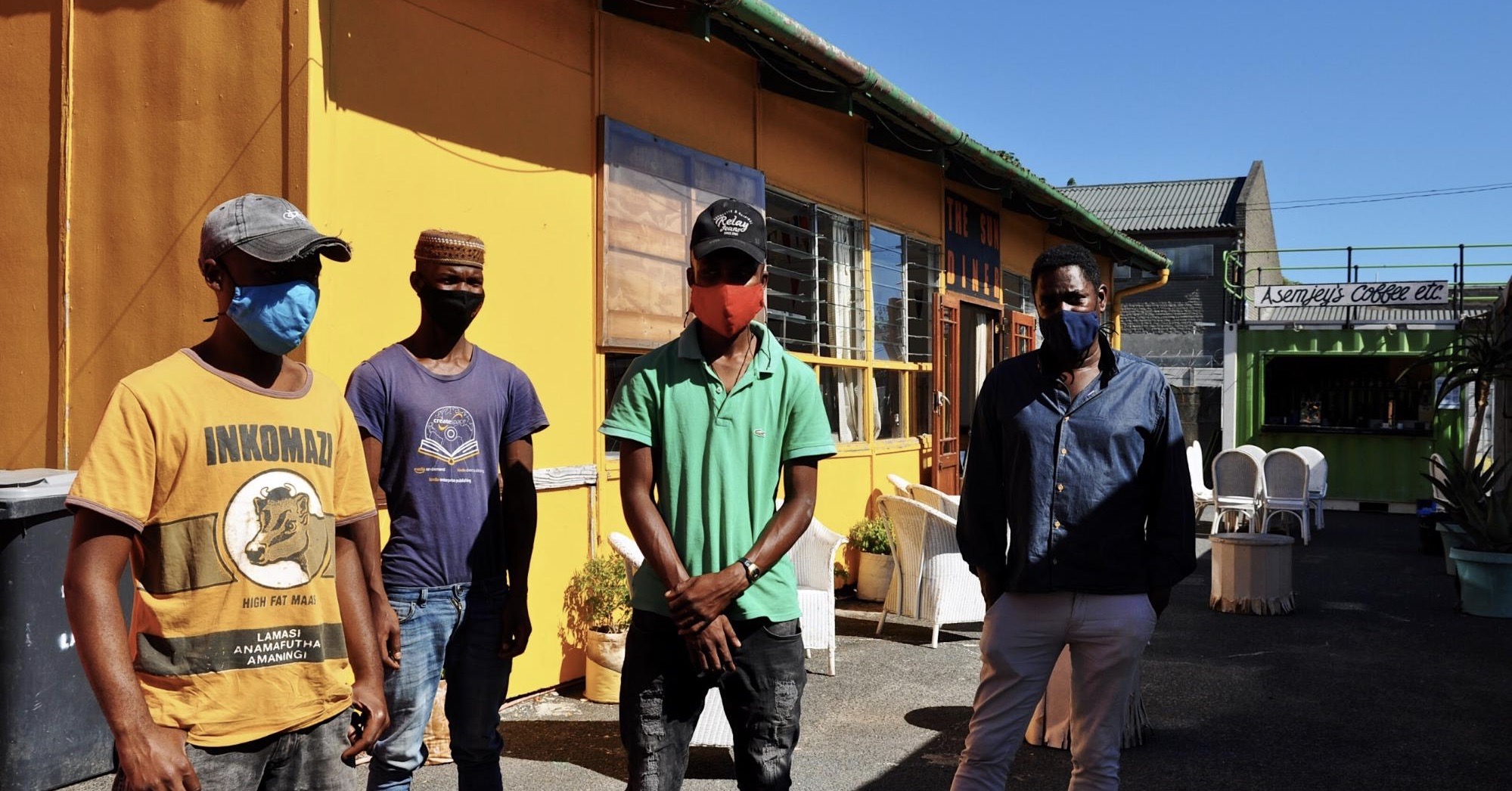 “That’s what I like about this place, giving opportunities to young people who want a better life and to have an impact on their communities,” former ambassador Asekho said. Now 28 years old, Asekho first joined IKhaya Le Langa five years ago as an ambassador and now is the resident barista. 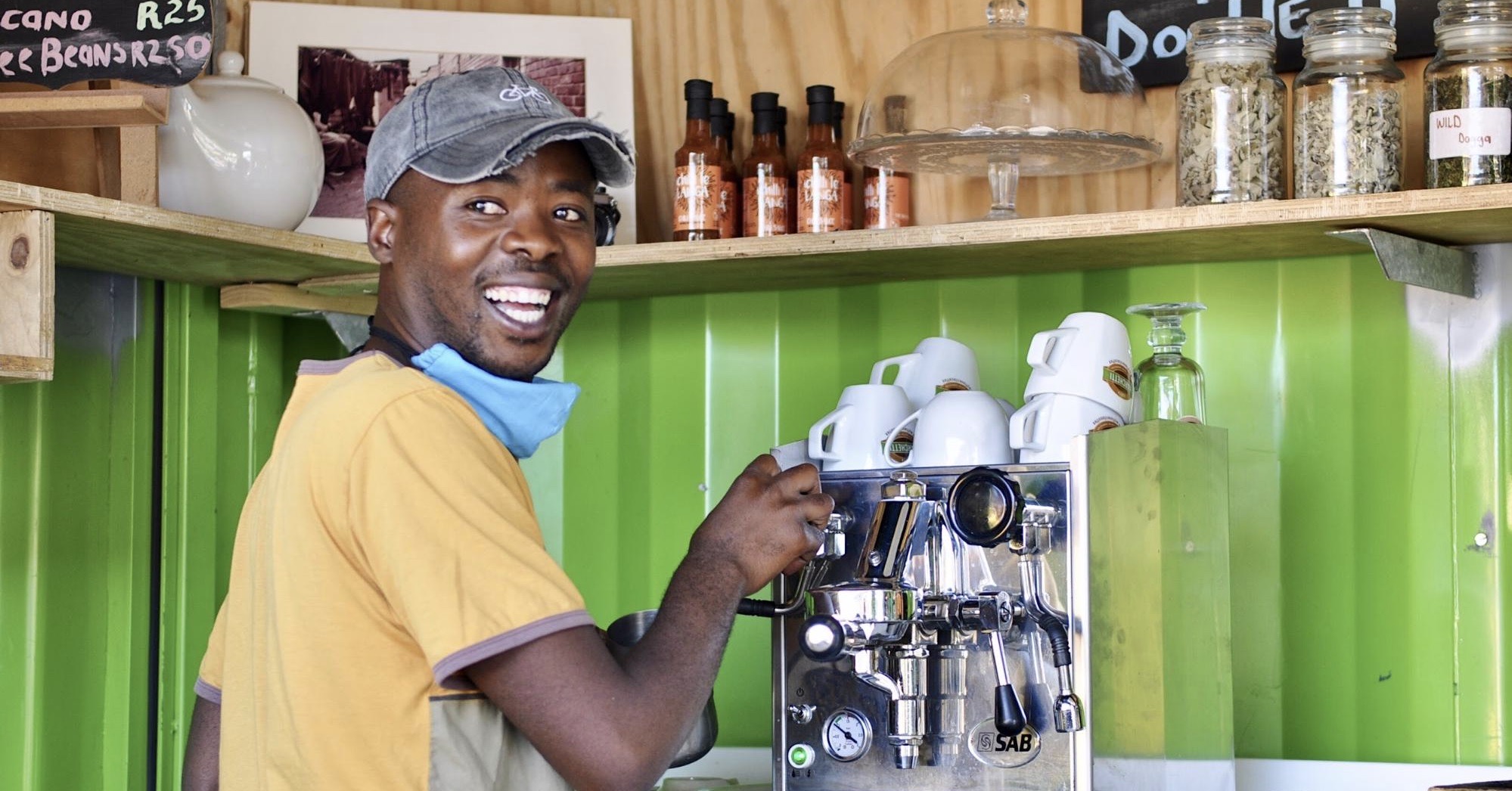 Asekho’s dream is to use ingredients and traditions local to South Africa in his work as a barista. In the back garden next to the café, he points out impepho, a traditional herb with detoxing powers. “It’s inspired by my friends, the community, and where I come from [in the Eastern Cape],” Asekho says, as he walks between vegetable boxes, gleaming in the slanting light of the afternoon sun. 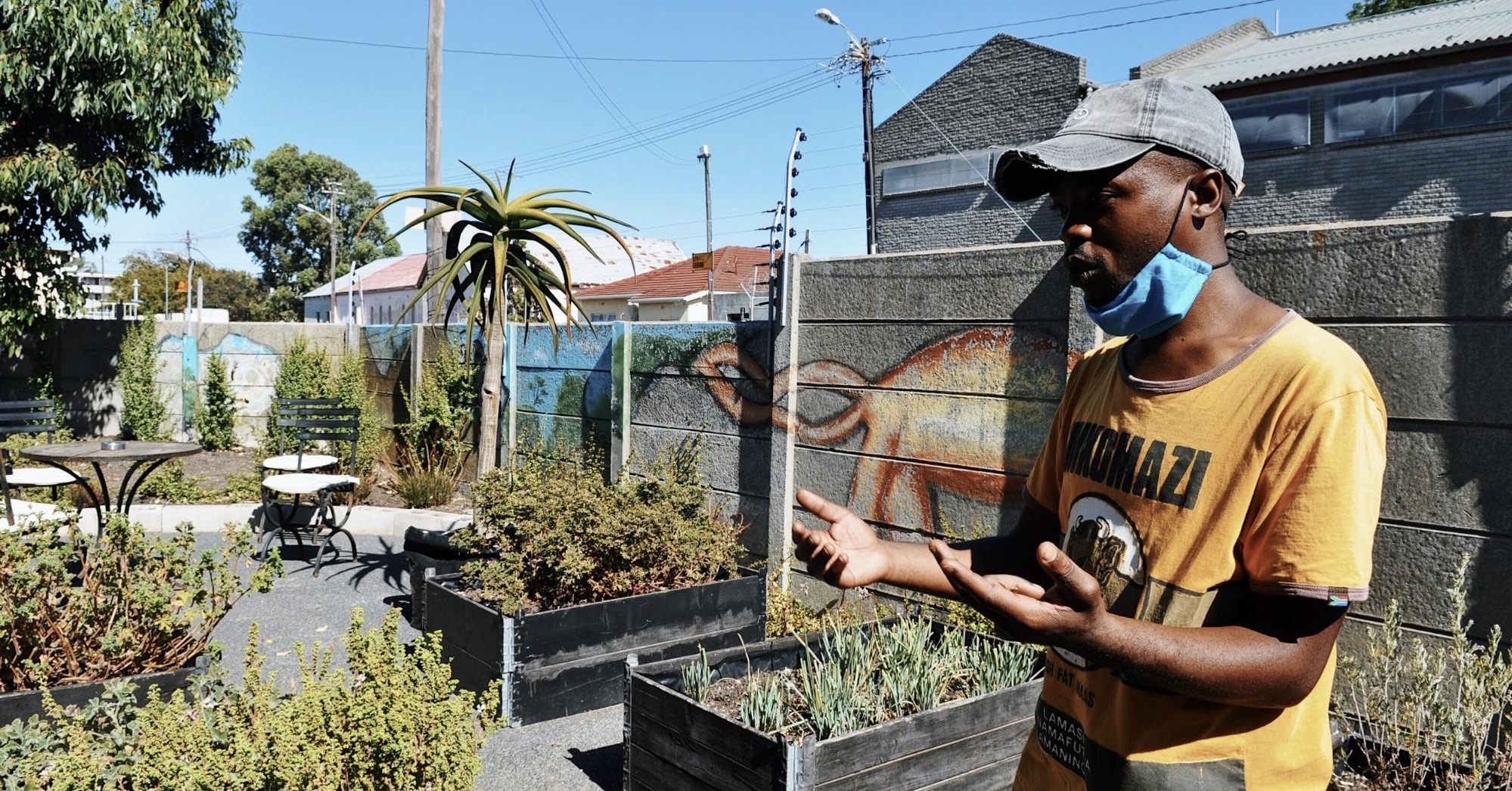 When asked what the impact of being at IKhaya Le Langa has been on him, Asekho said, “Personal development and being an entrepreneur — it’s one of my biggest achievements in life. Without any doubt. Everything I’ve learned and achieved is from IKhaya Le Langa.”