On Friday, ONE members working with Concern Worldwide, UNICEF, Save the Children and Oxfam helped hand in a petition of 643,486 names calling for action on hunger by World Leaders: 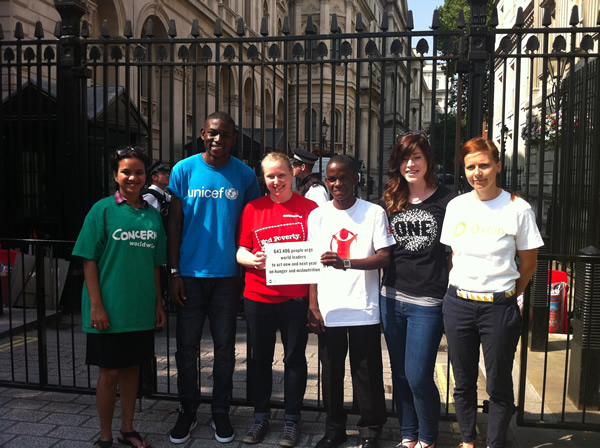 “In the last two weeks, London has seen the best of human ambition and achievement. The Prime Minister and the Vice President of Brazil deserve real credit for seizing this moment to insist on the same ambition in the race to end extreme hunger and malnutrition. For too long, this scourge has failed to receive the global attention it deserves. Efforts to provide children the nutrients they need to grow and thrive have been under funded and under resourced.  Today is an important start to putting nutrition more firmly on the agenda.

“Earlier this year, leaders committed to a long-term World Health Organisation target to dramatically reduce the number of children affected by stunting. What is needed now to achieve this is much more political will to galvanise the resources, capacity and attention that are essential to accelerate progress.

“If world leaders deliver on the direction set here today, over 21 million children could be saved from stunting by the next Olympics in Rio. Among those children will be future doctors, entrepreneurs, scientists, political leaders – even the next Mo Farah. Giving those children the chance not just to survive but to thrive will be a fantastic and fitting legacy from this inspiring Olympics.

“Having laid these firm foundations, David Cameron must build on them next year. Just as Britain’s athletes have excelled in 2012, UK leadership in the fight against hunger must be world class in 2013.

“It is fitting that the next Olympics are in Brazil – a country that has made remarkable progress in reducing stunting over the past 3 decades. Brazil has shown that success is possible. For the world to succeed, the Prime Minister and Vice President Temer will need the private sector, civil society and other world leaders to join them in taking up this challenge.”

You can take action against hunger on our Act Now page.