Did you know that over a trillion dollars is lost by developing countries annually through secret and illegal dealings, money laundering and illegal tax evasion? The Panama papers are a testament to the fact that the current global financial system allows for and enables this behaviour, which ultimately means fewer hospitals, schools and contributes to the plight of millions of people who live in extreme poverty.

Let us call on governments and private sector to be transparent in corporate dealings and payments. 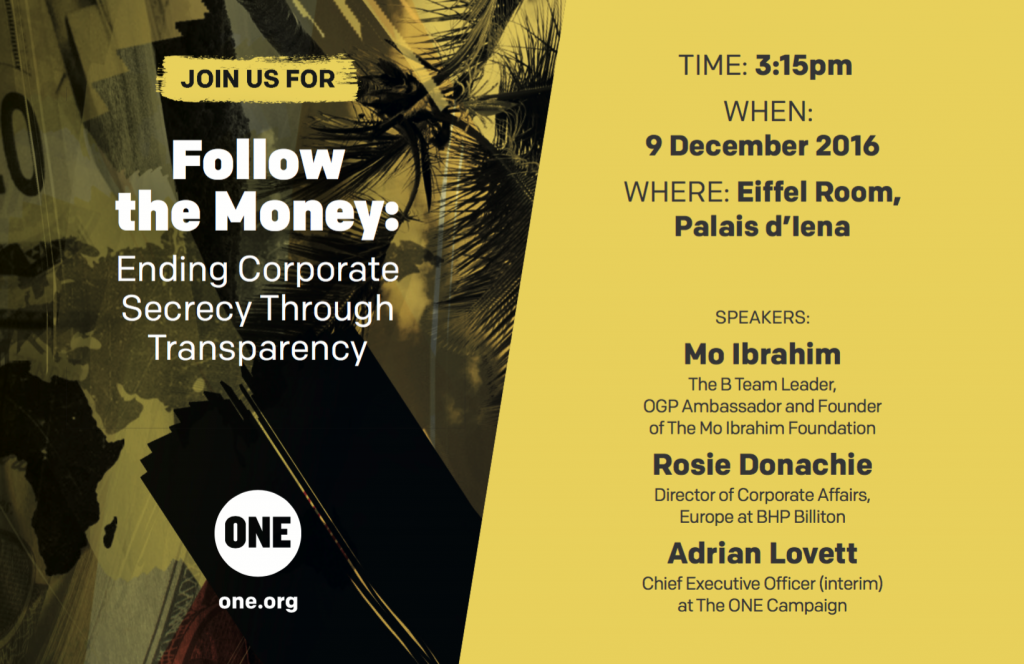 This week, ONE joins over 70 governments, civil society organisations and businesses in Paris, France for the fourth Open Government Partnership Summit . The summit will discuss anti-corruption, transparency, access to information, service delivery and the implementation of open government.

Anonymous companies, trusts and similar legal instruments play a central role in money laundering, concealing the identity of corrupt individuals and irresponsible businesses involved in activities including the trafficking of arms, drugs and people, the theft of public funds, and tax evasion. Transparency around company ownership is a critical part of the solution to ensuring this kind of activity is exposed and those involved are brought to justice.

Similarly, knowing how much a multinational company is paying a government in every country in which it operates assist government in enforcing their own tax laws and help citizens follow the money.

On both beneficial ownership and country by country reporting, there are live legislative processes happening right now which could ensure these important steps in the fight against corruption are enshrined in law.

The European Union is reviewing the Anti-Money Laundering Directives, it objective is to improve the effectiveness of the EU’s efforts to combat the laundering of money and financing of terrorist activities.

The EU Accounting Directives should include the disclosure of all financial payments made to governments for all EU companies on their transactions in both the EU and outside territories; on a country by country basis in order to  help win the war against illegal tax evasion.

ONE will be attending the Summit in order to push forward the need for more transparency in order to fight against extreme poverty and ask governments for ambitious commitments.

ONE is hosting a High Level Roundtable called : Follow the money : Ending Corporate Secrecy Through Transparency on December 9 at 3.15 pm at Palais d’Iena. and will monitor the OGP members during the Summit.