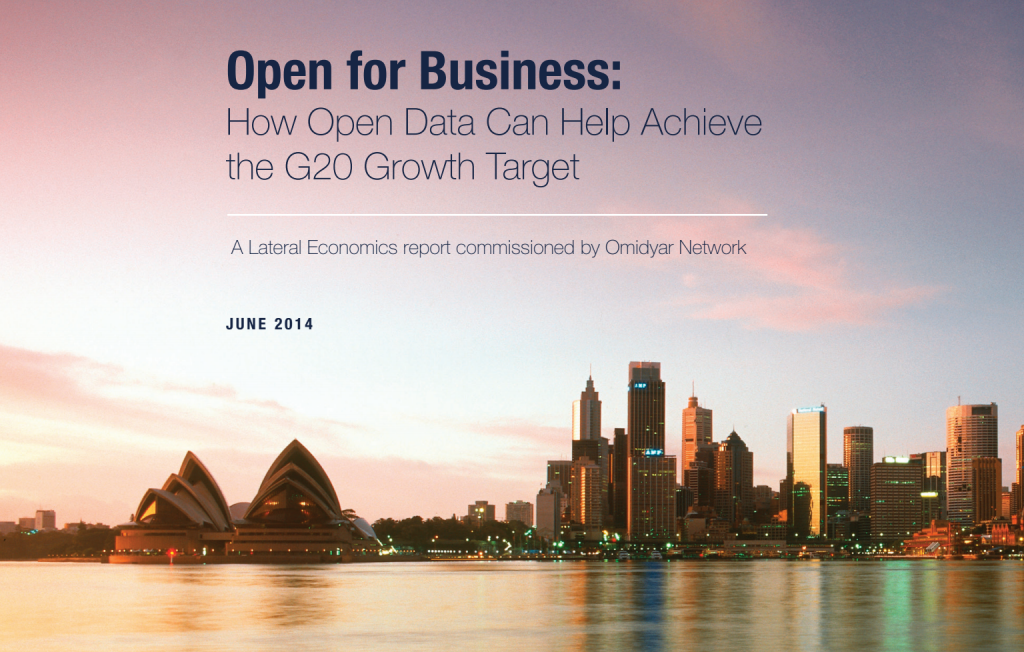 Today in Canberra, Australia, Martin Tisné of the Omidyar Network and Nick Gruen of Lateral Economics launched Open for Business, a report showing that if G20 economies opened up government data they could boost cumulative economic growth by 1.1 percentage points.

In G20 terms, this would get countries over halfway towards the G20 ambition to boost economic growth by 2%: not a bad result for releasing information into the public domain.

But what could this mean for developing countries?

The initial McKinsey study the report is based on shows that all countries would benefit from governments opening up their data sets and that this could boost economic growth everywhere. How?

One example: Think of the economic and societal revolutions that have taken place since GPS data has been released publicly. Now we can leave navigation to our devices and cut waiting times for our trams, trains and buses with real time information available via apps on our smartphones.

So how can we make sure more economic and social benefits are felt by developing countries and make the most of the opportunity presented by the G20?

The following priorities will be crucial to ensuring that open data really does unlock economic potential in partner countries beyond the G20:

1. Ensure open data is provided in a machine readable format

Once governments agree to open up their data, it’s crucial they release it in a format that can have practical applications.  Essentially, machines need to be able to read it.  We must ensure all demands on reporting, disclosure and data issues include this, and are non-negotiable.

2. Encourage civil society and innovators to work together to investigate how open data can be used to tackle poverty and improve lives

For the data revolution to have the maximum impact on poverty alleviation, we need creative thinking from all corners of the globe.  Support for civil society and partnerships with tech companies to develop and incubate smart ideas for poverty alleviation should be encouraged and supported by G20 governments. A fund to build this capacity in developing countries would be a positive G20 outcome.

3. Make sure all G20 countries agree to mandatory reporting from oil, gas and mining industries, and to put information on the beneficial owners of companies and trusts in the public domain

There are two key opportunities for data to be opened up from the private sector to help boost development outcomes. Firstly, many G20 countries are already making sure that oil, gas and mining industries report payments they make to the governments in countries in which they operate. Others must now hop on board and adopt mandatory rules and work with companies to ensure the data released is effective, complete and useable.

Gathering information on the beneficial owners of companies and trusts is also crucially important: but when that data is made public, its potential to boost development really takes off. It allows citizens to hold governments and businesses to account, fight corruption and trace money that could be better invested in lifesaving development spending.  But for this to happen, the information must be of high quality, comparable across borders and machine readable.

Today’s report underlines the importance of open, high quality data and its catalytic role in helping us fight extreme poverty. A thank you to Nick Gruen of Lateral Economics for authoring the report, and to Martin Tisné and the Omidyar Network for commissioning it.

The compelling case made for the economic benefits of open data provides a transparency offer governments can’t refuse, with potentially huge benefits for the world’s poor.