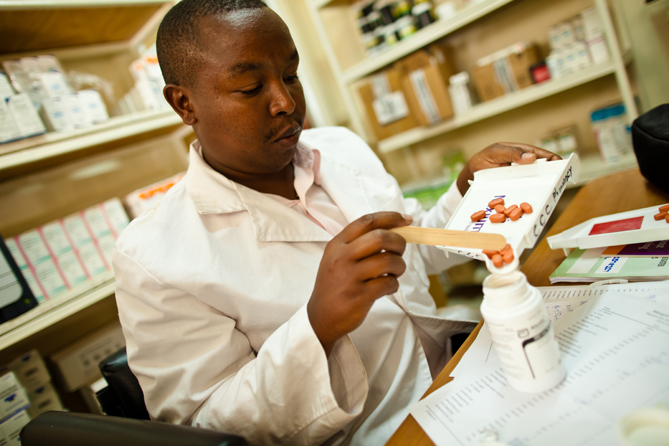 A pharmacist measures out ARV drugs for a patient at the Mbgathi District Hospital. Photo credit: Morgana Wingard

If your life-threatening illness required treatment costing thousands of dollars a year for the rest of your life, what would you do?

Until recently, this was the reality for millions infected with HIV. With anti-retroviral drugs (ARVs) costing several thousands of dollars in the early 2000s, just 300,000 people were receiving treatment. By the end of 2012, that number had skyrocketed to 9.7 million—an acceleration aided by the increased affordability of ARVs.

How did they become so much more affordable in ten years?

Many factors contributed to this success story, but undoubtedly credit is in part due to many groups such as the Medicines Patent Pool (MPP), which works to lower the cost of HIV/AIDS treatment through increased availability of generic treatments.

I talked with Esteban Burrone, head of policy for the Medicines Patent Pool, to learn more.

Anupama Dathan: How does your organization make ARVs more accessible?
Esteban Burrone: When thinking about HIV medicine accessibility and prices, people rarely consider the role of patents. Patents give pharmaceutical companies 20 years of exclusive rights to their drugs to incentivise investment and development of medicines, but this can also prevent other manufacturers from entering the market with low-cost generic versions.

At the Medicines Patent Pool, we partner with drug companies to make their patents available for generic manufacturers to produce affordable, quality ARVs for developing countries in exchange for a royalty. Over time, this can reduce the cost of medicines by over 90 percent.

For children, availability of child-friendly formulations, not affordability, is the main issue. We have begun to work with pharmaceutical companies to address this issue, too.

What are a couple of MPP’s biggest successes so far?
Our generic drug manufacturing partners provide enough World Health Organisation-recommended ARVs for over 1 million patients each year. The average prices for these medicines are 34% lower now than when we started. These savings and other measures have been key to allowing nearly 10 million people to be on treatment today and are essential for the continued scale-up of treatment.

The World Health Organisation recently recommended earlier initiation of antiretroviral therapy. As a result, the numbers on treatment will rise dramatically in coming years as we negotiate and partner with more drug companies, resulting in billions in savings.

Thanks to our partnerships, several generic firms are also working to manufacture the newest ARVs for people in developing countries. Normally there is a tremendous lag time but we are working to get the best, newest medicines to those who need them as quickly as possible.

What are the biggest obstacles to increased availability of affordable ARVs?
Key obstacles are funding and affordability. Funding for the fight against HIV has remained flat at a time when we need to invest more to reverse the spread of the virus. We hope governments will step up at the Global Fund replenishment this year to increase funding.

MPP partnerships have reduced the cost of first-line HIV treatments for newly infected patients. Our focus is now on drugs under development and second- and third-line medicines, which patients need when they develop resistance. These medicines are three and 15 times more expensive, respectively, so it is important that all pharmaceutical companies holding patents on HIV medicines partner with us to bring down the cost of these newer medicines.

How can the public get involved?
We hope the public and policy makers will acknowledge when companies are doing the right thing in partnering with the MPP. For companies that have not yet agreed to join the MPP, we hope that hearing from the public will encourage them to join with us in making these lifesaving medicines affordable and available for everyone in developing countries.

Find out more about Medicines Patent Pool or connect with them on Twitter or LinkedIn.

You can also support ONE’s campaign for leaders to step up their support for the Global Fund to fight AIDS, TB and malaria, a crucial funding source for the fight against these three deadly but treatable diseases.