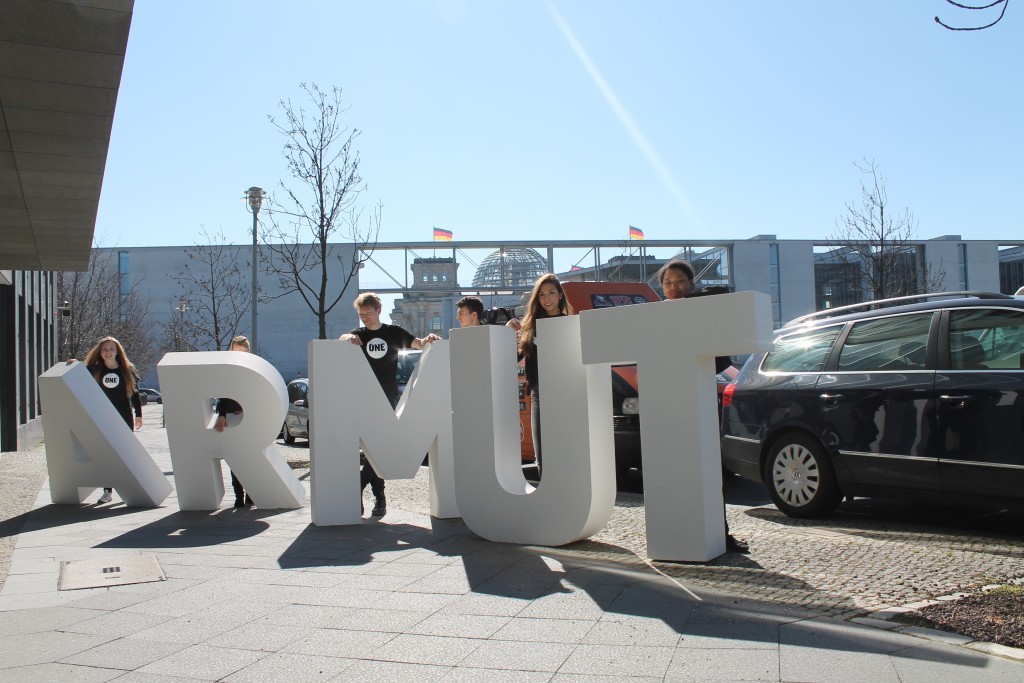 ONE Youth Ambassadors take the #MUT2015 campaign to the German government. Photo: ONE

On Wednesday, the German cabinet announced the largest increase of official development assistance in the history of the country, escalating its aid spend by € 1.28 billion in the upcoming year.

According to our calculations, in 2016 this will lead to 0.42% and 0.46% of national income going to aid in 2019 – a step in the right direction when it comes to reaching the 0.7% target. This should be reason enough for the government to put forward a roadmap on how and when it is planning to achieve the 0.7% target.

With €860 million, the Federal Ministry for Economic Cooperation and Development will receive the majority of additional funds in 2016, which will top up long-term and poverty-related programs. The months leading up to the next cabinet decision on 1 July will be about how to spend the allocated funds most effectively in order to eradicate extreme poverty.

We’re campaigning for more aid to be targeted to the Least Developed Countries (LDC’s), with 50% of German aid going to the poorest communities around the world. At the moment, Germany is far from reaching this goal: in 2013, less than a quarter was spent on aid for this group of countries.

Furthermore, women and girls should be put at the heart – our newest report Poverty is Sexist demonstrates that extreme poverty can only be eradicated if we make use of women’s potential, especially in the agricultural, health and educational sectors.

For years, we have been pressing the German government to increase aid and now we are making progress!

Only 10 days prior to today’s budget decision, we launched our German campaign #MUT2015, calling upon the government to meet the 0.7% target in the year they host world leaders at the ‘G7’ Summit. Our Youth Ambassadors have played a crucial role in this campaign, posting letters to decision-makers which ultimately turned the tide when it came to the governments latest announcement – we couldn’t be prouder!

Thank you to everyone who has helped us get this far – now to reach 0.7%!