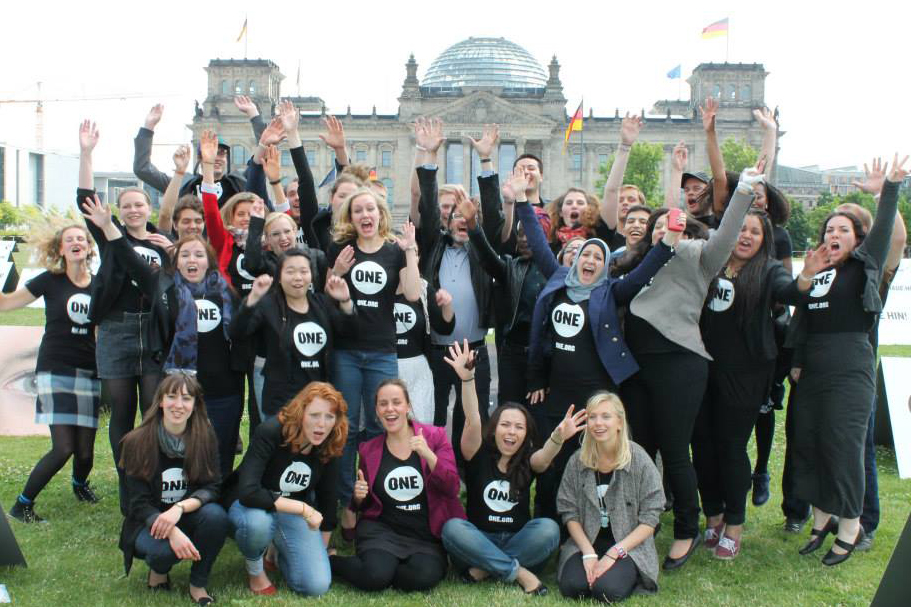 German Youth Ambassadors outside the Bundestag in Berlin in 2013. Photo: ONE

We’re looking for 100 young activists across Europe to lead the fight against extreme poverty in their communities.  Could you be one of them?

Ambassadors will become voices for ONE and organise creative and ambitious actions to support our campaigns, particularly around the European elections in May 2014.

We’re looking for volunteers aged 18-35 in the UK, France, Belgium, the Netherlands and Italy to join our existing network of incredible Youth Ambassadors in Germany.

You’ll receive skills training on lobbying high-level decision makers, mobilising the public, organising events and getting media coverage.  And in the summer, you’ll come together with other Youth Ambassadors across Europe for a two day Power Summit in Brussels to share your experiences and put your skills into practice at the European Union itself.

Being a ONE Youth Ambassador is all about fact-based activism, inspired by concrete evidence and driven by technology.  In the past 20 years, we have halved extreme poverty, and if we keep this level of progress up, it could be virtually eliminated by 2030. As one of the largest aid donors in the world, the EU is instrumental to hitting this target. That’s why we need you!

ONE Germany launched their Youth Ambassadors programme three years ago and it has been incredibly successful. They played a crucial role in the country’s Ich Schaue Hin campaign around the elections last year, by lobbying politicians, giving media interviews, organising concerts and other events, as well as creating video clips and making a noise online.

On top of that, they had the chance to meet Bill and Melinda Gates, ONE’s co-founder Bono and the German chancellor, Angela Merkel.

If this sounds like something you want to be part of, find out more and apply now.