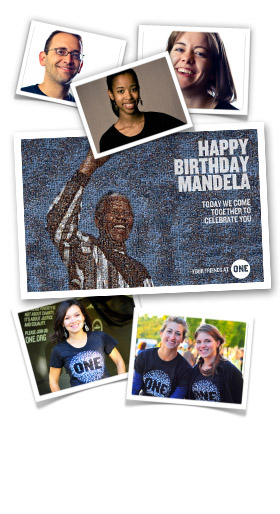 On July 18, Nelson Mandela turns 92. Help us honour him on his birthday and thank him for nearly a century of life-changing work.

Add your photo to the giant birthday card that will be personally delivered to Nelson Mandela. You can easily submit a photo using Facebook or upload your own.

When Mandela was born, his father named him Rolihlahla, an Xhosa word affectionately meaning “troublemaker.” While the world would later come to know this boy as Nelson – the English name given by his teacher on his first day of school—Mandela has spent a lifetime stirring up an inspiring dose of trouble.

From an early age, Mandela acted boldly for those in need. He battled against apartheid, spending almost 27 years in prison to stand up for what he knew was right. He fought to make sure that every South African was given the honour of a vote, leading the country to its first free and fair election. He turned the tragedy of family death into an opportunity to educate his country about HIV/AIDS. He rallied on behalf of the hungry. He lobbied for equal education. He called for the world to come together and free those trapped in the prison of poverty. He challenged our generation to lead with action, not just words.

He’s shown the world what a difference just one troublemaker can make.

Nelson Mandela has devoted his life to serving his community, fighting for his country and speaking out on behalf of the poor. Let’s wish him happy birthday and show him our thanks.

Add your photo to the card

As Nelson Mandela said on the eve of his presidential election, “I stand before you humbled by your courage, with a heart full of love.” Now it’s our turn to stand before him and do the same.