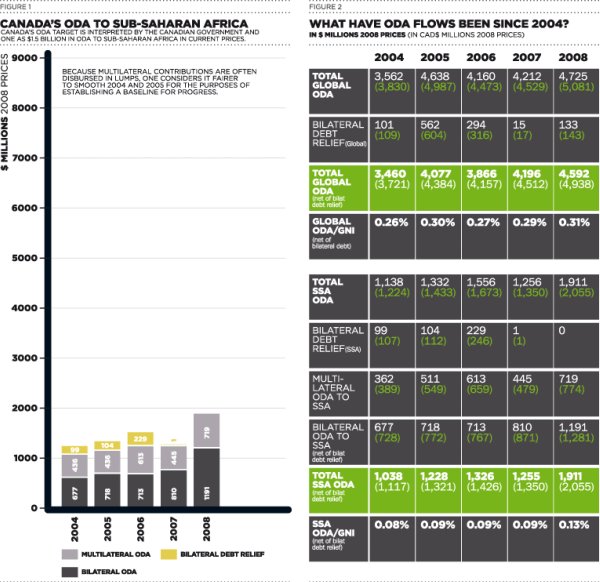 According to this year’s DATA Report, while the G8 are collectively failing to follow through on their 2005 Gleneagles promises to Africa, three countries are successfully meeting or beating their targets. One of the surprising front-runners in this group is Canada. At Gleneagles, Canada pledged to double its development assistance to sub-Saharan Africa: $1.5 billion by the end of 2008. It has not only met this target, but exceeded it, directing $1.9 billion to Africa by the end of last year. This means that it has delivered 206% of increases promised by 2010.

Canada remains a strong supporter of basic education, health, and more recently agriculture and food security. Canada has also emerged as a new leader on the aid effectiveness front, promising to untie all development assistance by 2012–2013.

Canada should be applauded for meeting its commitment to Africa, particularly in a year where countries like Italy and France are threatening to drag down the entire G8’s efforts. Accountability is more important than ever in an increasingly unpredictable financial climate, which has left the world’s poorest countries struggling maintain recent gains in the reduction of poverty and disease. Canada should use its good performance as leverage at the upcoming G8 in Italy to push the group to develop a recovery plan for countries who are behind to get back on track towards Gleneagles.

As host of the G8 Summit in 2010, Canada must also look ahead to create bold, new aid, trade and investment commitments to Africa. Despite already meeting its target, Canada has yet to indicate any increased spending plans to Africa over the next few years. While the Canadian government has said that its new aid strategy—which focuses the majority of bilateral aid on 20 focus countries (seven of which are in Africa)—does not indicate a shift, it still hasn’t shared detailed plans to prove this. These plans should include a clear timetable for delivery and a roadmap for increasing development assistance to reach 0.7% of GNI within ten years.

Over the past few years, Canada has worked hard to strengthen the G8’s relationship with Africa. It was instrumental in launching the historic 2005 Gleneagles commitment, and in 2009, it hosted the Kananaksis summit (where the G8 announced its support for the newly-formed NEPAD). To build upon this leadership, Prime Minister Stephen Harper should announce that when Canada hosts the G8 Summit in 2010, Africa and the Millennium Development Goals will be at the heart of their agenda. What better way to demonstrate Canada’s clear commitment to Africa’s future.