This blog is derived from ‘Ten Threats to Global Health in 2019’ .

The World Health Organization (WHO) has outlined top ten threats to global health this year. We’re glad to say that at ONE, we’ve been campaigning on some of the same major health issues, and we’re ready to step-up the pressure in 2019.

Through our #EUAid campaign, we’re fighting for EU member states to increase their funding for international development (through their Multiannual Financial Framework). This funding will help to tackle the factors that can lead to population displacement, conflict, drought, and other threats to health.

Our Make Naija Stronger campaign fought for an increase in government funding for the healthcare service — and we won. This funding helps the most marginalised in Nigeria access primary healthcare.

And last, but by no means least, our members will be campaigning for a fully funded Global Fund, to fight AIDS, tuberculosis and malaria. 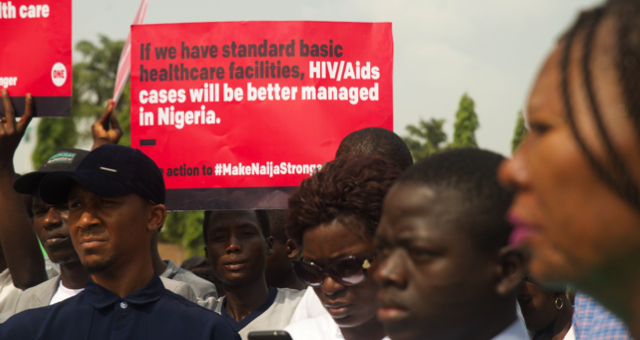 There has been enormous progress in the fight against HIV. But the epidemic continues to rage with nearly a million people dying from the condition every year. A group increasingly affected by HIV are young girls and women (aged 15-24), who are at higher risk and account for 1 in 4 HIV infections in sub-Saharan Africa despite being only 10% of the population. This year, WHO will work with countries to support the introduction of self-testing so that more people with HIV know their status and can receive treatment.

More than 1.6 billion people — 22% of the global population — live in places where protracted crises including drought, famine, conflict and population displacement, and weak health services leave them without access to basic care. WHO will continue to work in these countries to strengthen health systems.

Ebola and other high-threat pathogens

In 2018, the DRC saw two separate Ebola outbreaks, both of which spread to cities of more than 1 million people, some of the affected provinces were also in an active conflict zone, showing the context in which an epidemic of a high-threat pathogen such as Ebola is critical.

The reluctance or refusal to vaccinate despite the availability of vaccines threatens to reverse progress made in tackling vaccine-preventable diseases. In 2019 WHO will ramp up work to eliminate cervical cancer worldwide by increasing coverage of the HPV vaccine, among other interventions.

The world will face another influenza pandemic. WHO is constantly monitoring the circulation of influenza to detect potential pandemic strains: 153 institutions in 114 countries are involved in global surveillance and response.

With nine out of ten people breathing in polluted air every day – it comes as little surprise that air pollution is considered by the WHO as the greatest environmental risk to health. The microscopic pollutants in the air kill 7 million people a year.

Noncummunicable diseases including diabetes, cancer and heart disease are collectively responsible for over 70% of all deaths worldwide. This includes the premature deaths of 15 million people aged between 30 and 69. This year WHO will work with governments to help them meet the global target of reducing physical inactivity by 15% by 2030.

This mosquito-borne disease can be lethal and has been seen as a growing threat for decades. An estimated 4% of the world is at risk of dengue fever, and there are around 390 million infections. WHO’s Dengue control strategy aims to reduce deaths by 50% by 2020.

You can read more about our work on health here.