After the #MeToo movement pulled back the curtains on sexual assault and harassment, gender equality efforts are on the rise. It’s the year of the woman, there are viral “feminist” videos and gendered media campaigns — and even in donor countries development strategies are catching on: women, girls, gender equality, female, and feminism are popping up everywhere in government’s foreign aid strategies.

And on the surface, both the shares of bilateral allocable aid and total disbursements to projects targeting gender equality are at an all time high. But the details are murkier when you dive into the data.

Larger shares are being allocated to gender equality aid

Aid in support of gender equality is tracked through donors self-reporting using the OECD Development Assistance Committee’s (DAC) gender markers. The markers are a tool to identify projects that have a positive impact on advancing gender equality, reducing gender discrimination, or meeting gender-specific needs.

In 2018, the most recent year for which data is available, the share of bilateral allocable ODA targeting gender equality reached 39.4%, increasing by just over 4% from the year prior. While this still means that most funding is gender-blind, it represents a slow but steady increase from approximately 29% in 2012.

However, we only have information on projects’ contributions to gender equality for about 89% of projects in 2018 (a drop from 91% in 2017).

Total funding reached US$45.2 billion in 2018, up 11% from the year before in real terms — although the increase came largely through ramped up disbursements on projects which had a significant objective of gender equality, rather than principal objective. 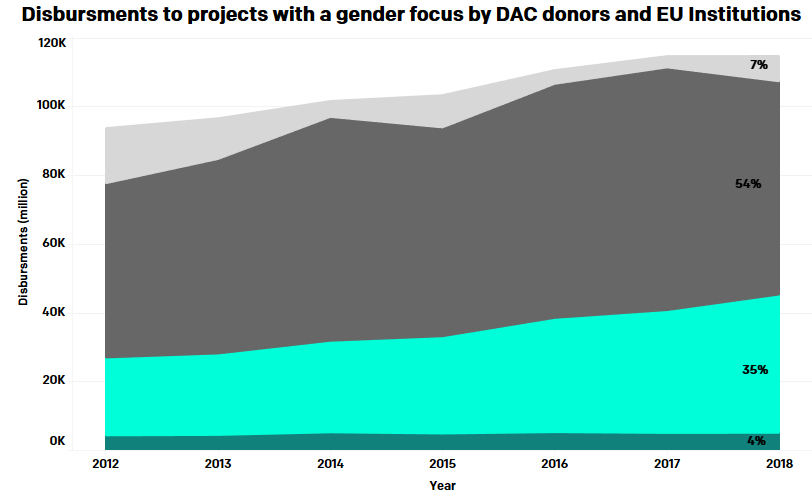 This increase in aid towards gender equality was driven by several donors, including Canada, EU Institutions, France, and the United Kingdom.

Despite Germany, and some other key donors, strong improvements in disbursements to projects with a principal objective on gender equality total allocations from DAC Donors and EU Institutions only only grew by 1% — or US$46 million.

DAC donors and the gender markers

Even more worryingly, those keywords filling our key strategy documents — like woman, girl, female, gender equality, mother, maternity, childbirth — only appear in 59% of the project descriptions and titles listed by the 26 DAC Donors that have projects with a principal objective on gender equality.

This is not only an issue for the US and it is one of the inherent challenges of self-reporting. A recent Oxfam study found major inconsistencies in information provided by donors about projects’ actual links to gender equality. Donors must urgently work to increase the quality and accuracy of their reporting to the DAC. 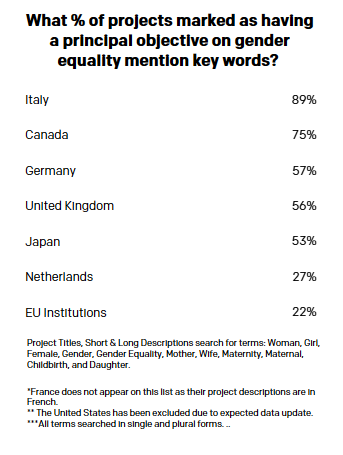 Despite positive trends in terms of increasing support to gender equality, much more needs to be done to ensure we have high-quality data. Otherwise, it is impossible to truly assess the impact of this funding on gender equality.

The gender markers can be a very useful research and accountability tool, but also risk becoming little more than box-ticking.

Has all of this got you thinking, what about my country specifically? How are we doing? What are we doing for global gender equality?

Head over to ONE’s gender aid dashboard where we provide a detailed breakdown of nine major donors’ gender equality focused aid, how it’s spent, what their key strategies are, and cross-donor comparisons.

CHECK OUT OUR INTERACTIVE TOOL

Editor’s note, 6 March 2020: After publication of this blog, the OECD released analysis indicating that the United States’ 2018 numbers are still considered preliminary.

Please take this into consideration when viewing the United States using the dashboard. As soon as the new OECD numbers are available online the dashboard will be updated accordingly.