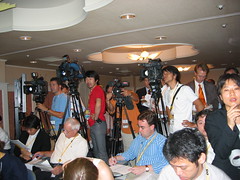 The G8 Summit kicked-off today in rainy Toyako and first on the agenda, happily for us, was Africa. The G8 leaders, 7 African leaders and heads of the African Union, UN and the World Bank met for a working lunch and into the afternoon.

We know that African leaders spoke to the G8 leaders about the importance of keeping their commitments, especially for increasing devleopment assistance to Africa. But, as yet, no clear announcements have been made. We expect some outputs from the G8 on Africa and Development tomorrow as well as a statement on the food crisis – I am keeping my fingers firmly crossed for positive outcomes. 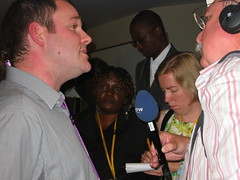 Our own ONE campaigning kicked-off in style too. This morning, Max Lawson and Takumo Yamada from Oxfam and our own Olly Buston packed the room for a media briefing on the G8 and Africa. Olly talked about the G8 countries’ mixed performances on aid – and highlighted the importance of boosting investment in health and agriculture. “The G8 promised at the Gleneagles summit in 2005 in Scotland to boost aid to Africa by a further $25 billion by 2010. But so far the G8 has boosted development assistance to Africa by only $3 billion – It’s fair to say the progress so far has been desperately slow,” he said to an audience of international reporters.

Our other highlight of the day was Bob Geldof’s arrival in Hokkaido in the late afternoon. Even after a long journey from London to Tokyo, another flight to the northern island of Hokkaido and a two hours drive once he landed, his mind was completely focused on the G8 and African issues. Expect to hear a lot more from him tomorrow.