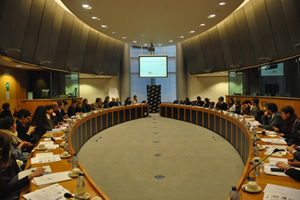 The International Aid Transparency Initiative (IATI) was launched in 2008 and is a voluntary, multi-stakeholder initiative, involving donors, partner country governments and civil society organisations. Organisations that sign up to the initiative publish information about their aid to a registry which can then be accessed by all. Publish What You Fund has been measuring the state of aid transparency and whether donors are living up to their commitments. The 2012 Index covers 72 organisations ranging from bilateral and multilateral agencies to climate finance funds and private foundations. These organisations were rated against 43 indicators of aid transparency and ranked accordingly. Based on the Index findings, the European Commission’s aid to developing countries is among the most transparent but with a mixed picture across departments. DG Development and Cooperation – EuropeAid that manages the large majority of EU aid comes top of the pack with an impressive 5th place.

Today, Publish What You Fund (PWYF) and ONE held an event together with British Member of the European Parliament (MEP) Fiona Hall. The Parliamentary briefing presented the main findings of Publish What You Fund’s 2012 Aid Transparency Index and focused specifically on the importance of transparency to deliver smart and effective development assistance to the poorest countries in the EU Budget 2014-2020.

Panellists included MEP Fiona Hall, ONE Brussels Director Eloise Todd, as well as Liz Steele, EU Representative and Andrew Clarke, Advocacy Manager from Publish What You Fund. The event was attended by around 50 representatives from the EU institutions, African representatives, EU governments and civil society. 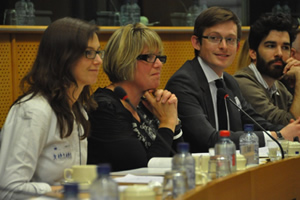 MEP Fiona Hall made opening remarks on the importance of transparency in aid and on the crucial need to protect development assistance against cuts in the next 7-year EU Budget. Then Liz Steele and Andrew Clarke from PWYF presented the main findings of the 2012 Index and recommended that the EU keeps up the momentum on aid transparency and keeps making progress on IATI implementation. Secondly the Commission should build on DG DEVCO’s success internationally and internally. Finally the international transparency commitments made at Busan should be enshrined in the EU’s legislative and financial framework.

Based on ONE’s 2012 DATA Report main findings, ONE’s Brussels Director Eloise Todd talked about the crucial need to protect the funds for the fight against extreme poverty under the European Development Fund and Heading 4 of the EU budget that are under serious threat of cuts by Member States.  The EU leaders’ special summit on the EU Budget 2014-2020 being held on 22-23 November, Eloise reminded participants that just over two weeks are left to save life-saving EU aid.

These interventions were followed by questions and remarks from the floor.

Do you want to protect European aid to the poorest countries? Sign our petition here!