ONE is embarking on a listening and learning trip to Senegal, Ghana, Mozambique and Kenya with members of our board and other supporters. Tom Freston checks in from Dakar, Senegal: 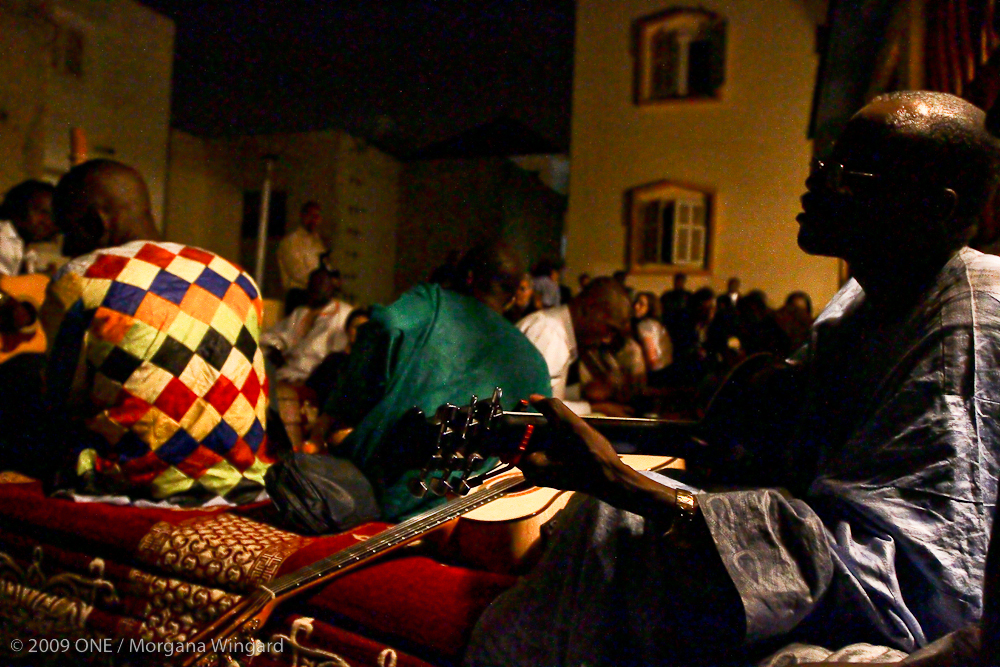 For me the door into Africa has been through its culture, particularly its music. That’s why I came to Africa in the first place. Years ago that unique “African sound” caught my ear and I first went so I could get a closer look. Dakar, the bustling capital of Senegal, was my first stop in what has now become a decades long obsession into the diverse African soundscape.

50 years ago, in celebration of African independence, many West African governments underwrote local musical ensembles as a way to actively project their new identities and the pride they had as new countries. It was a time of exuberance and optimism and that musical investment has now paid unexpected but great dividends for decades. The Rail Band in Mali, for example, yielded players like Salif Keita, Mory Kante, and others. In Senegal these state funded bands morphed into Orchestra Baobab, who fused Cuban and African rhythms, and they gave way to the more modern Mblax sound of Youssou N’Dour and, now great hip hop hybrids. There is plenty to go around on the African musical palate but, for me, West Africa is the most interesting. So, it was great to be back in Dakar with ONE and I hoped we’d all have a good chance to dive in. For those who had never been to Africa before, I knew this would be a way to get them “hooked” and change their perception that Africa was but a place with problems. Rather, first and foremost, it was a place of great beauty and creativity.

Music is everywhere in the air here and, if you are looking, it won’t take long to hear it. Once we landed I got in touch with Baaba Maal, who lives part-time in Dakar and is easily one of the most accomplished and beautiful singers in all of Africa. His 1982 classic acoustic record, with his collaborator, Mansour Seck, called “D’jam Leeli” (check it out on iTunes….I swear, it’s the “Kind of Blue” of African music). It was my real introduction to African music years ago. What a sound it is. Lo and behold, it turns out he’s in town and happy to hear from us. In fact he invites us all over to his home after dinner where he promises to “put a few musicians together up on the roof” after dinner. Typical African hospitality.

We travel over in a couple of vans, it’s around 11. He lives in a rather modest, modern multistory home filled with African art. Baaba is there to meet us outside. He was very happy to see Bono, in particular, as they had recently played a show together in London. Up we went to the roof. Pillows and rugs and candles were strewn all over the floor, the African sky was bright with stars, and we settled in to what became an amazing impromptu show. Players moved in and out. There was a huge kora, a 26 string instrument, a ngoni, a small 3 string guitar-contraption, and some African drums and guitars. It was a perfect introduction to Africa for my fellow travelers and a perfect antidote for jet lag. The yawning stopped, time was forgotten, the vibe was perfect. No one would have wanted to be anywhere else. The music gradually took off and built …..it was hard to tell when it actually started….first some tuning, then some casual vocals by a woman who was sitting, then another woman came out from the shadows. They were singing an old Fulani song about love and longing. Ten minutes later, from the other side of the roof, Baaba Maal, who had been sitting and talking to us, stood up and suddenly began to answer the women, in a call and response mode. Pretty startling., like an opera almost.. Baaba then gave a very poetic welcome to us all, to the good work of ONE, and reminded us of the responsibility of artists and activists to hold leaders to account and remind them of what justice is really about.

A wonderful start to our trip. It was hard to believe we had only been on the ground for a few hours. In that short time Africa had moved us in the most perfect way.