There aren’t many sportsmen or women who can claim to have helped end their country’s bloody civil war with a speech. Didier Drogba, however, is not your average sportsman. Three times English Premier League champion, twice African Footballer of the Year and he was even named in TIME Magazine’s Top 100 of 2010. He transcends the game that he excels at. When Drogba speaks, people around the world listen.

In 2005 when Cote d’Ivoire qualified for their first World Cup he addressed his fractured nation: “Ivorians, men and women, from the north and the south, the centre and the west, you’ve seen this. We’ve proved to you that the people of Ivory Coast can live together side by side, play together toward the same goal: qualifying for the World Cup. We promised you this celebration would bring the people together. Now we’re asking you to make this a reality.” The speech was replayed for weeks afterwards as tensions in the country eased. Cote d’Ivoire is certainly not a country now devoid of problems, indeed following a (relatively brief) civil conflict in 2011 following the disputed 2010 presidential election it could be argued that the situation is as delicate as ever. 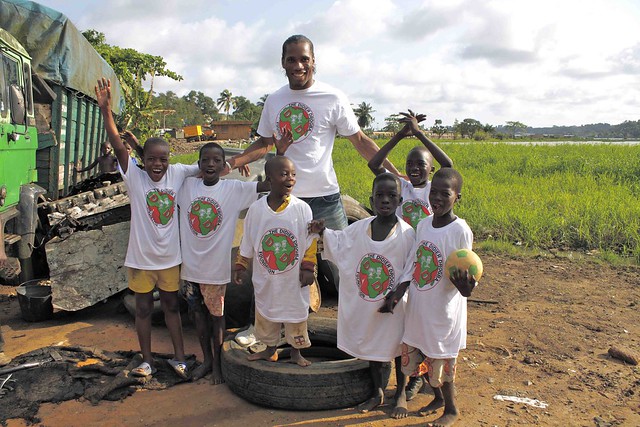 It is in this sort of climate that figures like Didier Drogba become even more important as those who can transcend politics and divisions within their home countries. The Didier Drogba Foundation, created in 2007, was set up to help provide the people of Cote d’Ivoire with the services they need to improve their quality of life following years of devastating civil war. Focusing on health, the plan is to set up a number of clinics around the country in order to improve provision on the ground, so that more people have access to the vital health care they need. The Foundation is holding its third annual fundraising ball in London in March:

“The troubles in Ivory Coast have affected the population in one way or another. It is important that we bring health care to those in need. The Foundation has received tremendous support so far but we still have a lot of work to do. I hope you will be able to join me that evening to help me accomplish this mission.”