“Some women arrived. They took me aside and bound my eyes. Somebody sat on my chest. They opened my legs and did it without asking whatsoever. I cried so much. (…) You cannot say anything, you cannot complain, you just have to accept it. (…) God created the woman like this. A man has no right to do differently. It’s like if somebody chopped off your arm or a leg. Something is missing.”
Sanogo Generosa (61), mutilated at the age of 6.
‘Broken Pots’ photo essay on FGM: Agnieszka Napierala, 2012 – Côte d’Ivoire.
Full series: http://flic.kr/p/dSKpyX

Today is the International Day of Zero Tolerance on Female Genital Mutilation (FGM).

The practice is widely recognised as a violation of human rights and is illegal in many countries.  Yet  more than 125 million women have experienced FGM worldwide, and 3 million girls are estimated to be at risk of the procedure every year.

While the majority of girls undergoing FGM are in Africa, the Middle East and Asia, a significant number of girls in immigrant communities in Europe and America are also at risk.

The good news is there has never been a stronger movement to end FGM.  NGOs, governments, campaigning groups and the media are working together to support girls at risk, uphold laws and change attitudes.

Here are 3 ways you can support the global fight to #endFGM. 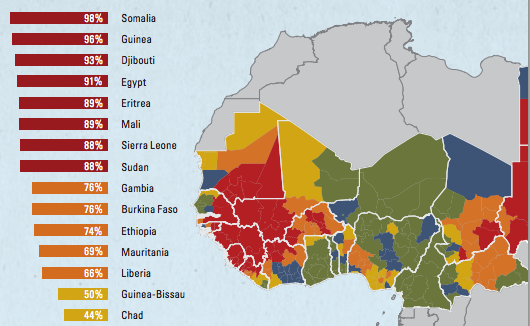 FGM is sometimes called Female Circumcision, a misleading comparison to the widely practiced male circumcision. Once you know the reality of what happens to girls, you’ll never refer to it in that way.  This powerful short video tells it straight.

Explore the global statistics with this interactive data or read UNICEF’s 2013 report on FGM.

You can help raise awareness about FGM by sharing these stories.

Janet is 13 and from West Pokot in Kenya.  She walked for 6 days to escape her family’s plans for her to have FGM, and is now living with a women’s network supported by ActionAid to campaign against FGM.

“One day I would like to go back to my community and be able to discourage other girls from having it [female genital mutilation] done and encourage them to go to school”, Janet says.

Read and share inspirational stories of girls, women and men leading change in their communities on ActionAid’s website.

FGM has been illegal in the UK since 1985, but no-one has ever been prosecuted for it.  The facts are hard to uncover, but a recent report estimates 66,000 women and girls in the UK have undergone FGM, and 24,000 girls under 15 are at risk.

Many girls are taken overseas to be cut during school holidays. There are growing calls for teachers and health professionals to be more aware of girls who may be at risk and report concerns to the police.

Organisations like Daughters of Eve provide support to girls in the UK, and are campaigning with others for the government to implement a stronger plan to tackle FGM.