M-D-G: These three letters are going to be at the tip of our tongues for the next few weeks as the UN High-Level Panel (HLP) plans out the next round of development goals. But before you get lost in a sea of acronyms, we want to take a step back and answer some of the frequently asked questions about our campaign to get the HLP to propose development goals that are transparent, accountable and that represent the views of the people.

First things first: Who is the HLP?
The High-Level Panel of Eminent Persons on the post-2015 Development Agenda is a group of 27 people selected by the UN Secretary General Ban Ki-Moon to advise on the development framework that comes after the MDG deadline in 2015. The panel has three co-chairs: President Susilo Bambang Yudhoyono of Indonesia, President Ellen Johnson Sirleaf of Liberia, and Prime Minister David Cameron of the United Kingdom. The HLP will submit a report of their recommendations to the Secretary General this May.

OK, remind me what the MDGs are again?
The original Millennium Development Goals (MDGs) are based largely on the International Development Targets, developed by donor nations through the Organization for Economic Co-operation and Development (OECD) in the mid-90s.  The targets were developed by technical experts from OECD member countries to help rally support around continuing aid programs to developing countries. This was their original purpose, and there was little input from citizens or governments in developing countries. Despite that, the world stood behind the MDGs, and the goals produced unprecedented progress thanks to the mobilization of resources and the focus on development outcomes. 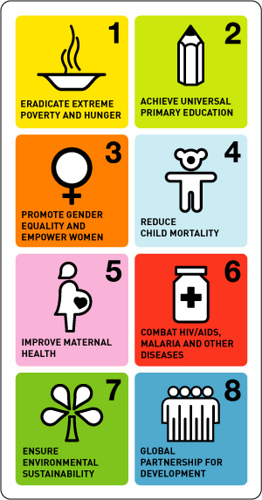 So what is MDG 2.0?
MDG 2.0 is the term we are using for the next set of development goals for 2015 to 2030. The High-Level Panel is in the process of putting together the report they’ll submit to the UN Secretary General in May – their recommendations for what MDG 2.0 should look like. We want voices of citizens to be part of that process.

Why does MDG 2.0 need the voice of the people?
While many of the main concerns of the world’s poorest people may have been addressed in the MDGs, our analysis of regional surveys shows that some key concerns were missing; in the past 12 years, it’s gotten easier to take those concerns into account. So this time, instead of looking back after the MDG 2.0 plans have been finalized to see what they missed, we’re asking the High-Level Panel to open the process and incorporate feedback before targets are finalized and the path for the next 15-20 years has been paved.

Why is “open data” so important to MDG 2.0? And can you give me an example of “open data”?
The MDGs set eight goals (which include 21 indicators) but in many cases the data isn’t available to measure how we’re doing, or how inputs are producing results. MDG 1 – arguably the most important of the eight – focuses on extreme poverty. Target 1.A is to halve the number of people living on less than $1 a day. This is the indicator that tracks extreme poverty around the world, and for 40 (nearly 1/3 of) developing countries, we don’t have enough data to know whether Target 1.A has been met.

The data we do have is constantly being revised and retracted, even 20 years later. To give you a better idea, in the past three years, the baseline data for poverty in 83% of developing countries has changed. How can countries meet targets when someone keeps moving the goalposts?

The poverty data we DO have is old – up to five years old. Data on hunger is four years old, and the majority of the numbers on gender equality, education and HIV/AIDS are three years old. So in addition to an open, transparent and accountable process for deciding the next set of MDGs, ONE* is asking for open, timely reporting on what is spent in pursuit of the goals, and what progress is made, and support to establish and keep up open data platforms so we all know where the goalposts are, and what we have to do to get there.

Great. Where do I come in?
The UN has put together a world-class panel of representatives from around the world to meet this very important challenge. We think they will agree when we tell them that citizens can’t be left out of these discussions, but they need to hear from you that you care – that the goals they set for the next decade or longer take into account the voices of people from around the world, especially those who will benefit most from a renewed push to eliminate extreme poverty.

Last question: What can I do to help right now?