IT. IS. OVER. After the European Parliament’s final vote held in December, the negotiations around the next European Union’s seven-year budget (or Multiannual Financial Framework, MFF) have finally wrapped up. After not one, not two, but TWO-AND-A-HALF YEARS of campaigning filled with countless EU leaders’ discussions, rounds of negotiations between the European Parliament and Member States, two European Commission proposals, Member State vetoes, and a global pandemic that turned the world we live in on its head…

959 days during which our activists and supporters never lost hope and determination in pushing the EU institutions to adopt an international development budget that would leave no one behind.

There’s no way around it: with €71.8 billion, the international development budget in the next MFF is less ambitious than what we at ONE called for. Especially in the face of the current COVID-19 pandemic – which is risking to undo decades of progress in the fight to reduce extreme poverty – ONE has been advocating for a bold EU aid budget that could respond to the greatest challenges of our generation: from global inequalities to future pandemics, and the climate emergency. And this is why we could not accept the outcome of the budget deal reached by EU governments back in July, which included a deep cut to the money allocated to international development for the next seven years.

Cuts during a global pandemic = a recipe for disaster

Since July, our committed activists and supporters were relentless in their efforts to make their voices heard with EU budget decision-makers and change the outcome of the deal. And guess what? As always, their efforts paid off.

During the latest round of negotiations between the European Parliament and EU Member States in mid-November, significant financial concessions on the levels of spending within the MFF were made by Member States. Among these, a further €1 billion to EU aid (YES!) and an additional €3.4 billion for the EU4Health programme (YESx2!), which could be used to fund new EU commitments to make sure COVID-19 vaccines and treatments are available globally.

This means more money to get children into school, to help young people reach their full potential, to ensure more people get the healthcare they deserve. In other words: more money to help create a stronger and more resilient world and prevent future crises from happening.

How did we get there?

We spread our message off and online 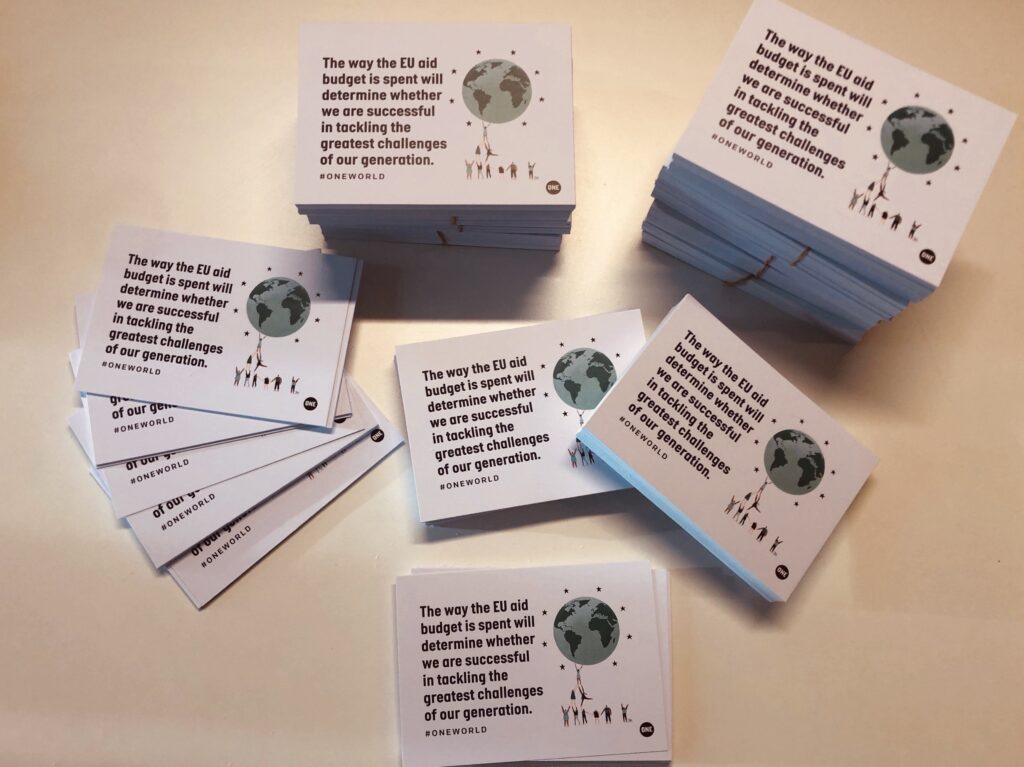 ONE supporters and activists sent thousands of postcards to decision-makers in support of an ambitious EU aid budget ahead of a key vote.

ONE supporters and activists took over 100,000 actions, addressing thousands of emails, letters, and tweets to decision-makers and adding their name to our petition.

And our messages cut through! EU Council President Charles Michel personally responded to an open letter that ONE supporters had addressed to him, thanking them for their commitment to ending extreme poverty.

We spoke to key decision-makers 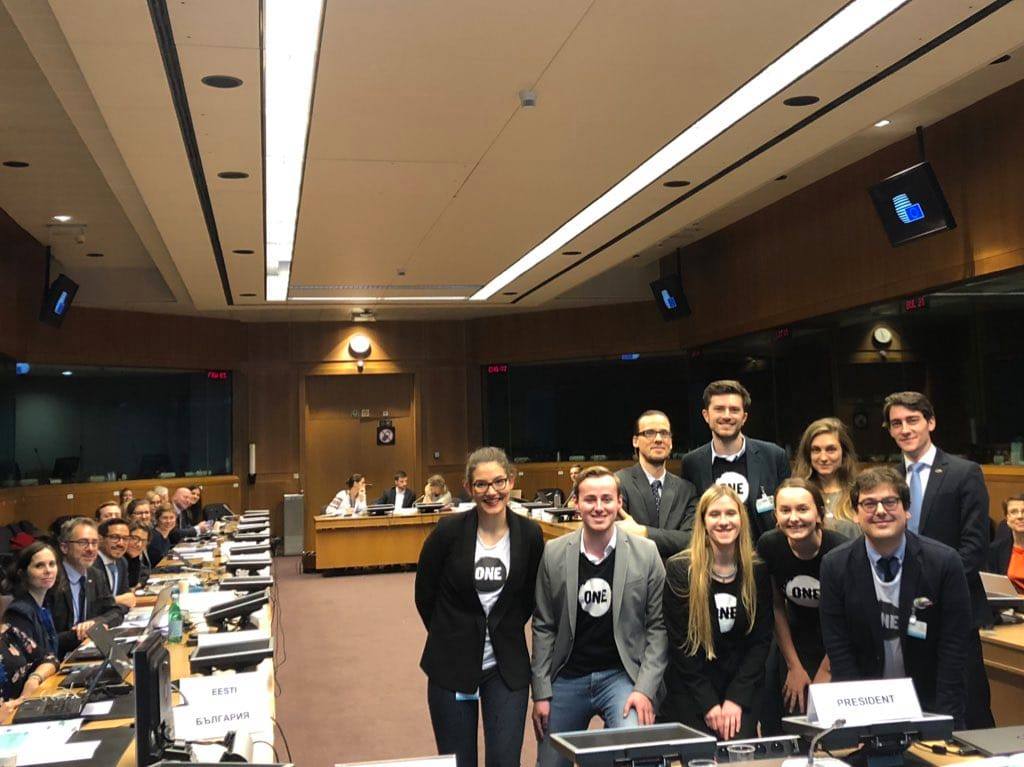 ONE Youth Ambassadors present ONE’s recommendations to the “CODEV group”.

ONE staff and activists held over 380 meetings with EU decision-makers.  including with Members of the European Parliament, EU Commissioners and Member States’ Ministers.  Among these, a group of ONE activists presented ONE’s recommendations on the EU aid budget to the representatives of the 27 EU Member States working specifically on development issues (“CODEV group”).

We took over city streets 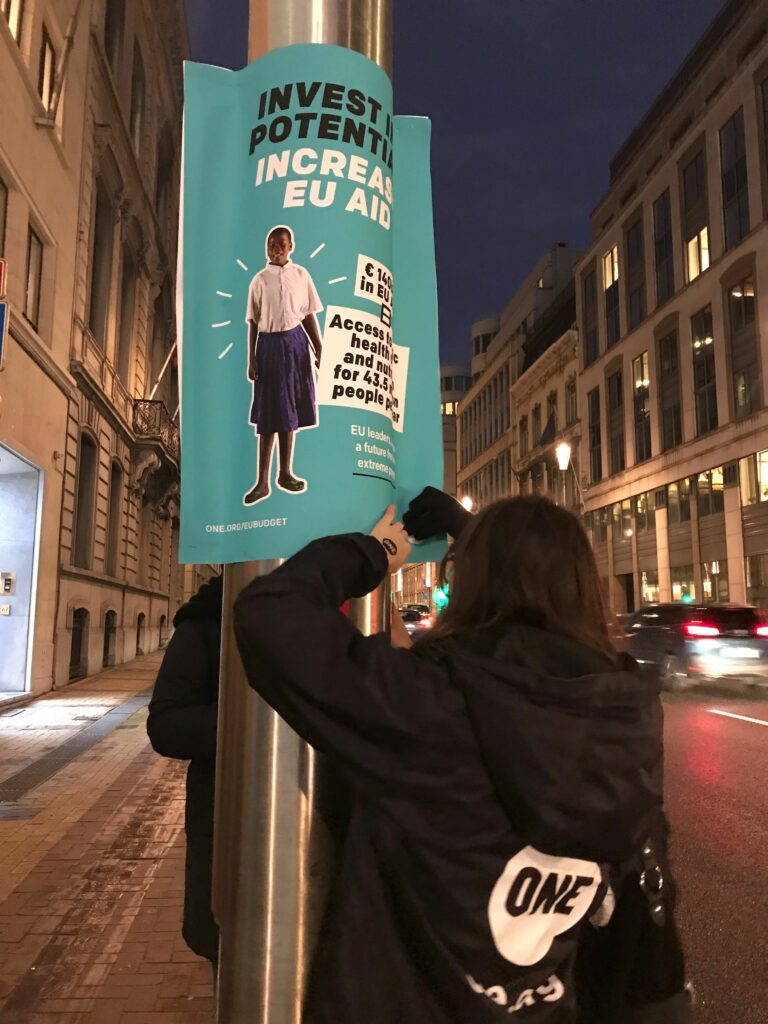 ONE activists hung posters in the European Quarter in Brussels ahead of a key European Council meeting.

ONE activists around Europe collected hundreds of signatures to our petition at events and festivals and ran campaign stunts – even if that meant waking up at 5 in the morning to hang posters outside government buildings ahead of key European leaders’ meetings!

We pushed our asks in the media 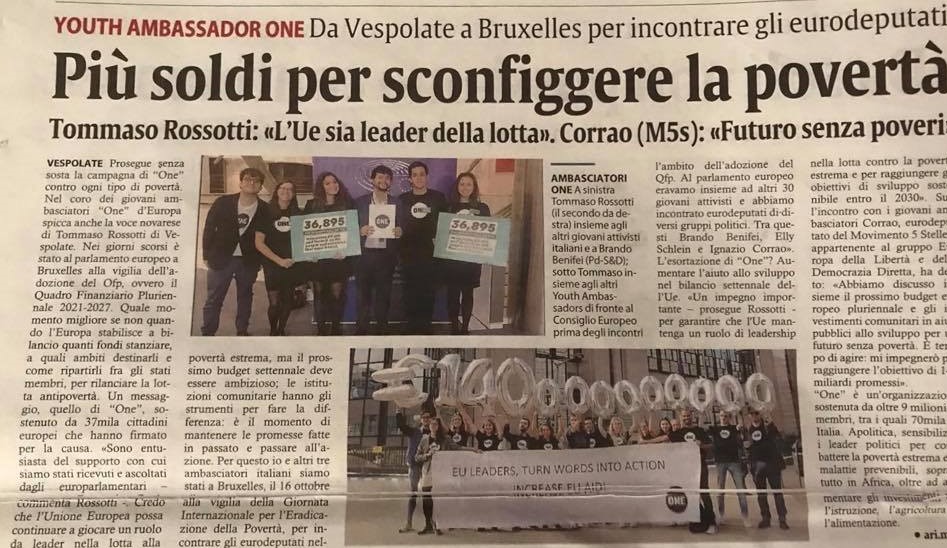 An Italian Youth Ambassador is featured in his local newspaper. The title reads “More money to eradicate extreme poverty”.

We made ourselves heard in the media 393 times, with activists speaking about the need for an ambitious EU aid budget in local media all across Europe, and raising awareness in their communities about the incredible results of EU aid.

It’s been intense at times, but we never forgot to have some fun in the process!

With the adoption of the next MFF, the fight for ambitious investments in development aid is not over.

After having agreed on the budget available for international development, the European institutions are now negotiating how this money will be spent. We are calling on them to prioritise investments towards those countries where the needs are greatest and in fields such as gender equality, health, education, and the eradication of extreme poverty. Additionally, every year, the European Union adopts a budget that has to stay within the spending limits indicated by the MFF, and we will campaign around this process too because we need to make sure that the fight against extreme poverty stays at the top of the EU agenda and decision-makers are pushed to stand in solidarity with the most vulnerable countries.

So, EU policymakers, be warned: ONE supporters will be watching you!

All photos of people gathering included in this blog were taken in 2018/2019, before the start of the COVID-19 pandemic.