On Tuesday 10 July, ONE held an event together with Bulgarian Member of the European Parliament (MEP) Ivailo Kalfin who is one of the MEPs in charge of the EU budget 2014-2020 in the European Parliament. The Parliamentary briefing presented the main findings of ONE’s 2012 DATA report and focused specifically on development assistance to the poorest countries in the EU Budget 2014-2020.The panellists included Eloise Todd, ONE Brussels Director, MEP Ivailo Kalfin and Klavdija Cernilogar from CONCORD, the European NGO confederation for Relief and Development. The event was attended by around 50 representatives from the EU institutions, ACP embassies, EU Permanent Representations  and civil society. 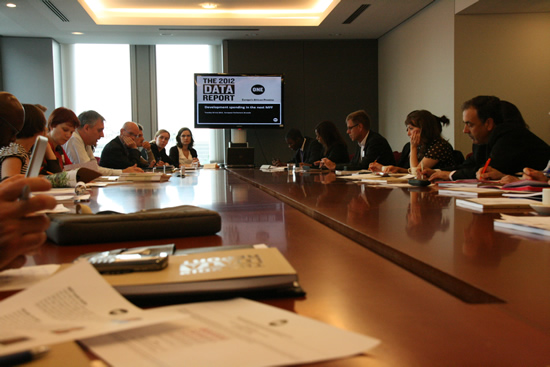 ONE’s 2012 DATA Report monitors the EU’s commitments to spend 0.7% of gross national income on development assistance by 2015, and provide half of all aid increases to Africa. Based on new findings of the DATA report, this event provided the opportunity to discuss the added value of development assistance channelled through the EU institutions. Member States spend on average around currently 21.5% of aid via the EU institutions –the European Commission’s proposal for the EU Budget 2014-2020 could therefore help get Member States closer to their 2015 development targets.

MEP Ivailo Kalfin first made opening remarks on future funding levels for development aid in the next EU budget and underlined that Europe’s priorities in external policy must be matched by adequate funding levels in the next spending cycle. Then Eloise Todd introduced ONE’s 2012 DATA Report and its main findings. Finally Klavdija Cernilogar made an intervention on the future of EU development policy and talked through the Aidwatch report. These interventions were followed by numerous questions and remarks from the floor, exploring some of the detail contained in the Data Report.

The European Parliament is in charge together with the 27 EU Member States represented in the EU’s Council of Ministers to negotiate the Commission’s proposal for the EU Budget 2014-2020 that was published last June. In its official position on the MFF, the European Parliament adopted a clear position on future EU development funding levels. An EP report published in 2011 stated that “the 2015 deadline for meeting the Millennium Development Goals and the collective Official Development Aid target of 0.7 % of GNI fall within the next MFF period” and that accordingly an “appropriate overall level of development aid and funding is required for the Union and its Member States to meet its international development commitments”. We will be working hard to make sure that development aid in the next EU budget is as effective as possible and brings Member States as close as possible to their targets.

Do you also want to protect European aid to the poorest countries? Sign our petition here!