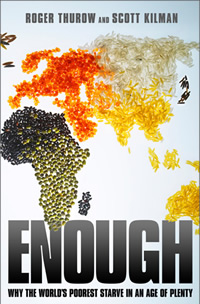 Roger Thurow has been a Wall Street Journal foreign correspondent for twenty years and has reported from more than sixty countries, including two dozen in Africa. His new book Enough: Why the World’s Poorest Starve in an Age of Plenty, co- authored with Scott Kilman, hit bookshelves this week.

When it comes to world hunger, it’s time to say, “Enough is enough!”

Several weeks ago I had the honor and great pleasure of addressing the ONE leadership retreat and presenting a preview of my book ENOUGH: WHY THE WORLD’S POOREST STARVE IN AN AGE OF PLENTY. This week ENOUGH hit the sturdy shelves of the bookstores and the virtual shelves at amazon.com.

In the days in between, the United Nations’ food agencies confirmed what we all feared: global hunger is getting worse. The number of chronically hungry people is soaring past 1 billion – the highest number since before the Green Revolution in the 1970s and an increase of more than 11% from just last year. And for the first time in nearly 40 years, the prevalence of hunger is climbing; 15% of the world’s population is now hungry, up from 13% in the middle of this decade.

So ENOUGH, which I wrote with my Wall Street Journal colleague Scott Kilman, is more timely than ever. During the writing, we held fast to an abiding mantra: outrage and inspire, outrage and inspire. We hope that is indeed what our book does:

Outrage, that we have brought hunger with us into the 21st century in ever-increasing numbers.

Inspire, that hunger can be conquered. A mighty grassroots movement founded on a new will to end hunger is rising.

ONE is a vital leader of that movement. We hope that ENOUGH will fuel the outrage and the inspiration to continuing shouting loudly, “Enough is enough.”